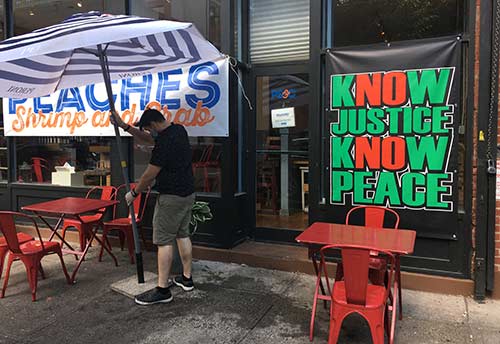 COVID-19 has taken more than precious lives from us. It’s also taken livelihoods and some of the aliveness we feel in the physical company of others. So people are excited about returning to their neighborhood restaurants to enjoy their favorite dishes with friends and family members they haven’t seen off-screen for months.

Phase Two of the City’s return to “normal” rollout began this Monday, with the reopening of retail businesses (apart from malls) and restaurants (restricted to outdoor seating). As we know, cafes, dinner establishments and larger chain restaurants have all been relegated to takeout and delivery for the past few months. Now those restaurants that can — those with available sidewalk or backyard space — will serve customers al fresco. More than 4,000 restaurants are certified to begin reopening this week according to Mayor de Blasio.

The scenarios for accommodating the new ordinances vary. Diners sitting outside will not be required to wear masks before or after eating, but health experts advise that we do so anyway. Social distancing between parties will likely be in place at some restaurants, but is not mandated, and hand sanitizer is highly recommended for the sake of all.

Outside of the state some restaurants have recently reopened only to close again after a staff member tested positive for the coronavirus. In New York, however, numbers have steadily declined, aside from a few spikes here and there. And the state has done as much testing as possible given the resources allocated by the government. New York City, which once had the highest number of COVID-19 cases in the nation, now has less than one percent of the population testing positive.
But it’s been a struggle for restaurants to survive and not all have made it. Welcome as it is, outdoor seating will account for only a fraction of the business these establishments can usually accommodate. The website National Restaurant Association forecasts that by the end of June roughly 11 percent of New York City’s 25,000 restaurants will have permanently closed, unable to recover from the financial devastation of COVID-19.

Challenges, Giving and Gratitude
Among the many neighborhood restaurants still standing are the Peaches Hothouse chain of soul food restaurants, Natural Blend Vegan Café and Brooklyn Tea.
Our Time Press spoke with Ben Grossman of the B&C Restaurant Group. He and business partner Craig Samuel, who met as chefs at Picholine in Manhattan, opened The Smoke Joint in 2006. It quickly became known as one of the premier places to get barbeque in the neighborhood and beyond. The pair later opened the original Peaches Hothouse on Tompkins Avenue followed by Peaches Shrimp and Crab on Grand Avenue in Clinton Hill, and a Hothouse on Lewis Ave. They closed The Smoke Joint at 87 South Elliott Pl to open another Peaches Hothouse in its place. The new venues showcase the range of soul food capable of satsfying high-standard palates.

Grossman says his restaurants had been doing takeout and deliver since March 17th. During that time, however, they were highly active in preparing and donating many thousands of meals. They fed hospital workers, firefighter, police stations and people in emergency need.
“We fed 400 residents at a NYCHA housing project on Vernon Blvd that lost gas. And now, out of that location we paired up with Heartshare St. Vincent’s Services, an outreach for foster kids, During this time a lot of us have family that we can fall back on, they don’t have that.”
As for this outdoor-seating phase, Grossman says they’ll be rolling out gradually, carefully and purposefully.

“Our industry is all about socialization, being together, celebrating, laughing, enjoying good drink, good food,” he said. “COVID took that away from us. So I’m hoping we can come together and follow these regulations and slowly, slowly, get back to some kind of normalcy.”
Ben’s partner Craig Samuel was out of town, but spoke briefly with Our Time Press, and is also eager to begin a return.

“You know, people see my wife’s grandmother Peaches on the wall and ask if all the recipes are hers. I say they are not, but the restaurants are named after her because of the way she made me feel. She was always extremely warm, welcoming and loving; that’s the atmosphere we strive to offer our diners.”

Deonne Wallace and Dave Wallace’s Natural Blend Vegan Café has grown to four locations since first opening on Washington Ave in Crown Heights 16 years ago. The second store, at 243 Malcolm X Blvd., opened in Feb. of 2016. Church and Flatbush opened last year and the location at 302 Nostrand Ave, a few months later.
He says Natural Blend is 95% percent vegan, with a couple of salmon dishes and saltfish to go with ackee. The vegan options are plentiful, from dinners to soups, patties, baked goods, juices and smoothies.

Deonne looks forward to resuming sit-down service. Sidewalk seating for Washington Ave and Nostrand Ave isn’t yet certain, as space is scarce. But things are progressing at the other two locations.
“We have a nice yard at Malcolm X Blvd. It’s been a hotspot for dining in Bed-Stuy, beginning as early as March and all the way into November. We’re replanting the garden for dining starting July. We also have backyard dining at Church Avenue.”
Brooklyn Tea, owned by fiancés Alfonso Ali Wright and Jamila McGill. Avenue is a beloved sanctuary on busy Nostrand Ave in Bedford-Stuyvesant. Wright, a tea sommelier by training, is gratified when he convinces a tea novice or certified coffee drinker to expand their horizons a bit. They’ve been open a year and a half. They were doing takeout and delivery during the pandemic shutdown.

“Our customers have come by just to make sure we stay open. There have even been times when customers have come in to put $20 in the tip jar, then walk right out. They literally kept us open, for sure. Other customers would bring Jamila and I lunch and dinner, cause they knew we were stressing out over how to stay open. This people in this neighborhood really did everything they could to make sure we still existed.“
Wallace says they won’t be able to do sidewalk seating because the sidewalk isn’t very wide and other conditions disallow it at the moment. But they remain open for takeout and delivery. In addition to teas, the restaurant sells sandwiches, wraps, pie, vegan waffles and cookies with Biggie Smalls’ face. The owners also have a retail store online.
These neighborhood businesses are eager to welcome you back, so consider treating yourself while you support.