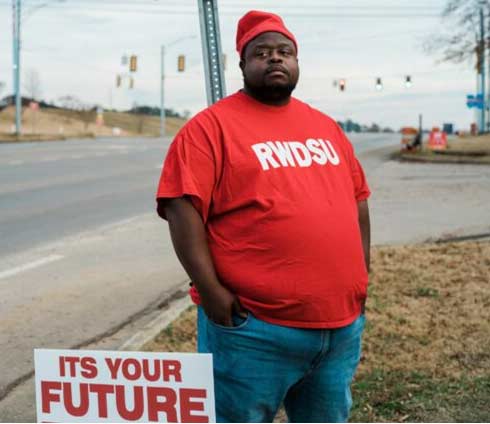 Michael “Big Mike” Foster, a Black poultry plant worker and RWDSU organizer February 6, 2021, at a rally in Bessemer, Alabama. “We’re here to fight for the people, to get them dignity, respect, and a living wage–not a minimum wage.” Photo by Liberation News
Kenneth E. Gulley, Mayor of Bessemer, Alabama, says the city’s contract with Amazon was the largest in its history. Fedex moved in. Lowe’s is there. Dollar General’s cashed in. Bessemer’s economic prospects are on the rise. And the “Marvel City” is attractive to many companies: the real estate’s cheap; the labor’s low-cost.
But it’s not okay with “Big Mike” and most of his co-workers at the Amazon plant. They’re putting up a fight for self-respect and unionization, as anti-unionist company owner Jeff Bezos (announced yesterday as the world’s richest man) reportedly has put into process ways to counter them.
But the world is standing in solidarity with the workers. And so is the December 12th Movement here in Brooklyn who are supporting Bessemer workers at a rally called for this Saturday, February 20 at the Amazon Fulfillment Center in East New York (2300 Linden Blvd at Essex Street (Bus B20).
“Our mission is to support the Amazon workers in their struggle for humane working conditions,” Vinson Verdree of D12 told Our Time Press yesterday. “As you may have heard Attorney General Tish James has just sued Amazon for workplace violations implemented during the COVID-19 pandemic here in Queens and Staten Island.
“What drew us to join the struggle is that the efforts to block unionization are a continuation of the denial of the basic human rights of Black people to have jobs that pay livable wages and fair labor condition, affordable and accessible healthcare, education, housing and all human rights.
“We are in the struggle to make sure that workers at this local Amazon site are given the opportunities they deserve and not be coerced into accepting unfair labor conditions which are exploitative.”
Among other issues at the Bessemer site, there’s the brutal work pace: workers are required to pick items in eight seconds, each, to fulfill quotas of 400 items hourly. That comes out to about 2,500 items per day per worker.”
Bessemer has seen union fights in the past. But this one: a virtual David and Goliath matchup isn’t anything like the others.
On one side are ‘the people” fighting for better wages, benefits, and protections during the pandemic. Bessemer’s a majority black town in central Alabama, home to 27,000 residents, where two thirds are Black (approximately 19,000), and one-third of that population-segment are employed at the Amazon factory.
There are hardworking people like Foster in Bessemer, where the median household income is about $30,000, and where one in four residents live in poverty.
There’s the other side: The corporate giant, run by Jeff Bezos who yesterday reclaimed his title of world’s richest person, worth more than $190 billion.
Amazon is bold with its opposition to unions, and it is doing everything in its power to crush the efforts of “Big Mike” and his friends. But Amazon may be outmatched by a force — sheer will-power — it has never experienced before. Certainly, one the company is beginning to feel.
It is reported that Amazon is going to all lengths to spread misinformation and anti-union propaganda. Here’s what some of the workers have said:

So, what are the stakes?
If Bessemer employees are victorious, they will be the first Amazon workers to unionize in the U.S. If it is successful this may be a “gamechanger,” inspiring similar action at Amazon’s 400,000 other warehouses.
Vinson told us, “We will support the efforts by the Amazon workers in Bessemer to unionize, and we will be ready to support the efforts of workers at other Amazon sites throughout New York City.”
Meanwhile, Amazon’s revenues grew to more than $100 billion in October, November and December of 2020 during the pandemic. Those 5,800 workers are contributing to that profit. So are the workers at the East New York facility and beyond.
“We are not a gigabyte, we are not a robot, we are human,” organizer Michael “Big Mike” Foster told a reporter. “I want them to know that we are important, and we do matter.”
To endorse and info call: (718) 398-1766 / D12m.com Bernice Elizabeth Green