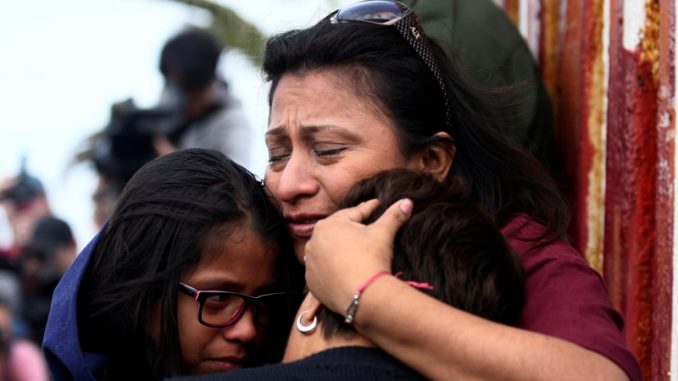 The Trump Administration was ordered to reunite all the immigrant children separated from their parents with those parents by today. That won’t happen. Judge Dana Sabraw of the U.S. District Court of Southern California (whose own mother was an immigrant from Japan) ruled that children under the age of five had to be reunited with their parents by July 10, 2018 and older children by July 26th. As we know, the first deadline was not met. Donald Trump’s “zero tolerance” policy has shocked citizens of this nation and of the world, creating a crisis of epic proportions with an abusive impact.

Families crossed the border from Mexico, many of them following the process to seek lawful asylum due to violence and death threats at home. But still, they were turned away. Children were processed through the Department of Health and Human Services’ Office of Refugee Resettlement while their parents were processed through Immigration and Customs Enforcement and held in criminal detention. The entire process has been so chaotic that the government appears unsure of the numbers, did not know where the children were and has already deported over a number of their parents.

The Department of Homeland Security’s official numbers say that “fewer than 3,000” children had been separated from parents: 450 of them between the ages of 5 and 17. It said 1600 parents would be eligible for reunification, 900 were not expected to be eligible and 863 have final deportation orders.

But a report earlier this month by Peter Lemieux for politicsbythenumbers.org looked exhaustively at the stats (and the gaps) to determine that an estimated 4,290 children were separated from families between October 2016 and July 5th of this year. His report states:

“The Department of Homeland Security’s own reports indicate that nearly 5,000 children have been separated at the border. Some 4,300 remain in custody, many more than the current official figure of ‘fewer than 3,000.’  Also, there must be many more than 102 children under five years of age.”

And what would make a parent “ineligible” to be reunited with a child by the court-imposed deadline? According to the government, these are parents who have not been located, who are in criminal custody, who have an alleged criminal history that would endanger the child, and parents who have a communicable disease. The government says these parents would become eligible for reunification if they are located, if their disease passes or if they are released from criminal custody into ICE custody. However, the latter example is a Catch-22 in some cases. In Texas, immigrant parents were transferred from detention facilities to a local federal prison. The American Civil Liberties Union (ACLU) takes exception to this notion of fitness.

“As we’ve argued in court (an ACLU statement says), the government’s word alone on this determination is not sufficient, which is why we’ve asked the court to order the government to provide details about the nature of the charge, conviction or warrant for each parent whom the government excluded so that we can verify that not reunifying the child is truly in their best interest.”

In a recent conference call with reporters facilitated by the American Civil Liberties Union (ACLU) Royce Murray, policy director with the American Immigration Council, spoke of coercive measures being taken against immigrant parents.

“They were being pressured by ICE to sign papers,” said Royce, “that it would be the fastest way that they could see their child again, that if they choose to fight their case they would be kept in detention for many months longer, prolonging their separation from their children.”

Meanwhile, an estimated 450 parents have already been deported, another 900 have “final deportation orders” and the government has not articulated a plan to have them reunited with their children.

In a recent segment of the news program “A.M. Joy” on cable station MSNBC, Pramila Jayapal gave host Joy Ann Reid a harrowing account of the scenario and of her recent visit to a detention facility for immigrant children.

“Families are still being separated,” said Jayapal. “We went to the Ursula Processing Center [in McAllen, Texas] and that is still happening. Sixteen hundred square feet and they are still in cages, it’s important that the American people know that.” And if the children are over 10, they are placed in cages on the opposite end of the facility from their parents. Parents are only allowed to see those children one hour a day, and we were told that hour was something like 6 in the morning. Additionally, if you are not a parent, that does not apply to you. We sat on the floor with a sobbing grandmother who had not seen her grandchild for four days. She does not know where he is, and she raised him, has effectively been his parent. If you are over 18 and you come with a 12-year-old sibling, you are separated as well.

“A child who was reunited with his mother told us that he was told by government agents that his mother had abandoned him and that was why she was not there. As they spoke to us, mother and child were weeping, and so were the rest of us. Can you imagine the child abuse, the government-sanctioned violence that we are doing to these children… by telling them things like that? A lot of top psychologists are saying this is child abuse.”

As the Trump Administration appears unable to rectify the horrible mess it has made, we await the next, and likely missed, deadline and hope that the ACLU and outraged citizens will throw lifelines to these families.

A Movement to Erect More Statues of Women in NYC