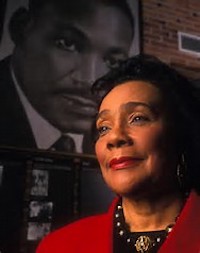 Mr. Chairman and Members of the Committee:

Thank you for allowing me this opportunity to express my strong opposition to the nomination of Jefferson Sessions for a federal district judgeship for the Southern District of Alabama. My longstanding commitment which I shared with my husband, Martin, to protect and enhance the rights of black Americans, rights which include equal access to the democratic process, compels me to testify today.

Civil rights leaders, including my husband and Albert Turner, have fought long and hard to achieve free and unfettered access to the ballot box. Mr. Sessions has used the awesome power of his office to chill the free exercise of the vote by black citizens in the district he now seeks to serve as a federal judge. This simply cannot be allowed to happen. Mr. Sessions’ conduct as a US Attorney, from his politically-motivated voting fraud prosecutions to his indifference toward criminal violations of civil rights laws, indicated that he lacks the temperament, fairness and judgment to be a federal judge.

The Voting Rights Act was, and still is, vitally important to the future of democracy in the United States. I was privileged to join Martin and many others during the Selma to Montgomery march for voting rights in 1965. Martin was particularly impressed by the determination to get the franchise of blacks in Selma and neighboring Perry County. As he wrote, “Certainly no community in the history of the Negro struggle has responded with the enthusiasm of Selma and her neighboring town of Marion. Where Birmingham depended largely upon students and unemployed adults to participate in non-violent protest of the denial of the franchise, Selma has involved fully 10 per cent of the Negro population in active demonstrations, and at least half of the Negro population of Marion was arrested on one day.” Martin was referring of course to a group that included the defendants recently prosecuted for assisting elderly and illiterate blacks to exercise that franchise. In fact, Martin anticipated from the depth of their commitment twenty years ago, that a united political organization would remain in Perry County long after the other marchers had left. This organization, the Perry County Civic League, started my Mr. Turner, Mr. Hogue, and others, as Martin predicted, continued “to direct the drive for votes and other rights.” In the years since the Voting Rights Act was passed, black Americans in Marion, Selma and elsewhere have made important strides in their struggle to participate actively in the electoral process. The number of blacks registered to vote in key Southern states has doubled since 1965. This would not have been possible without the Voting Rights Act.

However, blacks still fall far short of having equal participation in the electoral process. Particularly in the South, efforts continue to be made to deny blacks access to the polls, even where blacks constitute the majority of the voters. It has been a long, up-hill struggle to keep alive the vital legislation that protects the most fundamental right to vote. A person who has exhibited so much hostility to the enforcement of those laws, and thus, to the exercise of those rights by black people should not be elevated to the federal bench.

The irony of Mr. Sessions’ nomination is that, if confirmed, he will be given life tenure for doing with a federal prosecution what the local sheriffs accomplished twenty years ago with clubs and cattle prods. Twenty years ago, when we marched from Selma to Montgomery, the fear of voting was real, as the broken bones and bloody heads in Selma and Marion bore witness. As my husband wrote at the them, “it was not just a sick imagination that conjured up the vision of a public official, sworn to uphold the law, who forced an inhuman march upon hundreds of Negro children. Who ordered the Rev. James Bevel to be chained to his sickbed, who clubbed a Negro woman registrant, and who callously inflicted repeated brutalities and indignities upon nonviolent Negroes peacefully petitioning for their constitutional right to vote.”

Free exercise of voting rights is so fundamental to American democracy that we cannot tolerate any form of infringement of those rights. Of all the groups who have been disenfranchised in our nation’s history, none has struggled longer or suffered more in the attempt to win the vote than black citizens. No group has had access to the ballot box denied so persistently and intently. Over the past century, a broad array of schemes have been used in attempts to bloc the black vote. The range of techniques developed with the purpose of repressing black voting rights run the gamut from the straightforward application of brutality against black citizens who tried to vote, to such legalized frauds as grandfather clause exclusions and rigged literacy tests.

The actions taken by Mr. Sessions in regard to the 1984 voting fraud prosecutions represent just one more technique used to intimidate black voters and thus deny them this most precious franchise. The investigations into the absentee voting process were conducted only in the black belt counties where blacks had finally achieved political power in local government. Whites had been using the absentee process to their advantage for years, without incident. Then, when blacks, realizing its strength, began to use it with success, criminal investigations were begun.

In these investigations, Mr. Sessions, a US Attorney, exhibited an eagerness to bring to trial and convict three leaders of the Perry County Civic League including Albert Turner, despite evidence clearly demonstrating their innocence of any wrongdoing. Furthermore, in initiating the case, Mr. Sessions ignored allegations of similar behavior by whites, choosing instead to chill the exercise of the franchise by blacks in his misguided investigation. In fact, Mr. Sessions sought to punish older black civil rights activists, advisers and colleagues of my husband, who had been key figures in the civil rights movement in the 1960’s. These were persons who, realizing the potential of the absentee vote among blacks, had learned to use the process within the bounds of legality and had taught others to do the same. The only sin they committed was being too successful in gaining votes.

The scope and character of the investigations conducted by Mr. Sessions also warrant grave concern. Witnesses were selectively chosen in accordance with the favorability of their testimony to the government’s case. Also, the prosecution illegally withheld from the defense critical statements made by witnesses. Witnesses who did testify were pressured and intimidated into submitting the “correct” testimony. Many elderly blacks were visited multiple times by the FBI who then hauled them over 180 miles by bus to a grand jury in Mobile when they could more easily have testified at a grand jury just twenty miles away in Selma. These voters, and others, have announced they are now never going to vote again.

I urge you to consider carefully Mr. Sessions’ conduct in these matters. Such a review, I believe, raises serious questions about his commitment to the protection of the voting rights of all American citizens and consequently his fair and unbiased judgment regarding this fundamental right. When the circumstances and facts surrounding the indictments of Al Turner, his wife, Evelyn, and Spencer Hogue are analyzed, it becomes clear that the motivation was political, and the result frightening — the wide-scale chill of the exercise of the ballot for blacks, who suffered so much to receive that right in the first place. Therefore, it is my strongly-held view that the appointment of Jefferson Sessions to the federal bench would irreparably damage the work of my husband, Al Turner and countless others who risked their lives and freedom over the past twenty years to ensure equal participation in our democratic system.

The exercise of the franchise is an essential means by which our citizens ensure that those who are governing will be responsible. My husband called it the number one civil right. The denial of access to the ballot box ultimately results in the denial of other fundamental rights. For, it is only when the poor and disadvantaged are empowered that they are able to participate actively in the solutions to their own problems.

We still have a long way to go before we can say that minorities no longer need be concerned about discrimination at the polls. Blacks, Hispanics, Native Americans and Asian Americans are grossly underrepresented at every level of government in America. If we are going to make our timeless dream of justice through democracy a reality, we must take every step possible to ensure that the spirit and intent of the Voting Rights Act of 1965 and the 15th Amendment to the Constitution is honored. The federal courts hold a unique position in our constitutional system, ensuring that minorities and other citizens without political power have a forum in which to vindicate their rights. Because of this unique role, it is essential that the people selected to be federal judges respect the basic tenets of our legal system: respect for individual rights and a commitment to equal justice for all.

The integrity of the courts, and thus, the rights they protect, can only be maintained if citizens feel confident that those selected as federal judges will be able to judge with fairness others holding differing views.

I do not believe Jefferson Sessions possesses the requisite judgment, competence and sensitivity to the rights guaranteed by the federal civil rights laws to qualify for appointment to the federal district court. Based on his record, I believe his confirmation would have a devastating effect not only on the judicial system in Alabama, but also on the progress we have made everywhere toward fulfilling my husband’s dream that he envisioned over twenty years ago. I therefore urge the Senate Judiciary Committee to deny his confirmation.

I thank you for allowing me to share my views.

View From Here: We Will Not Go Back