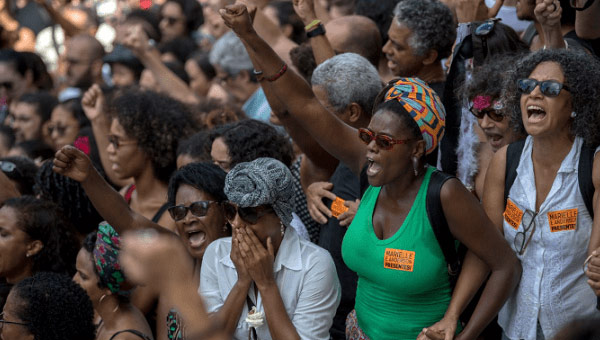 Celebrating Brazil’s History Month and Black Cinema The People’s Forum 320 West 37th St. 6:30-9pm FREE. The first Black Brazilian women collective in the U.S. invites all to celebrate Brazil’s Black History Month with the African diaspora in New York. The event features short films by Afro Brazilian filmmakers with stories of historical resistance and love. Discuss the current political context in Latin America on issues such as racial discrimination, gender, and culture. The panel will feature activists from Latin America, centering the legacy of Black cinema as a tool for liberation, antiracist education, and connection with ancestrality. Register at Eventbrite.

Census 2020 Teach-In Central Library Grand Lobby 10 Grand Army Plaza 6pm FREE. Join the NYC Census Team, Borough President Eric Adams, and others as they launch Brooklyn’s Get Out The Count neighborhood organizing campaign at the Library’s 2020 Census Teach-In. In 2010 Brooklyn had the lowest response rate of any county nationwide with a population of over 500,000 – fully 33% of households did not mail back their forms. A number of demographic qualities make Brooklyn “hard to count” and predispose it to an undercount. An undercount could potentially mean over $1 billion in reduced federal funding for New York City each year for the next decade. RSVP at brooklynpubliclibrary.org.

Show Love #ShopSmall on Myrtle Avenue  Along Myrtle Avenue All day FREE. First, there was Black Friday. Then there’s Cyber Monday. Then came Small Business Saturday, which the Myrtle Avenue Brooklyn Partnership will be celebrating for the 10th year. On Myrtle Avenue, 9 of 10 businesses are independently owned and Small Business Saturday is the perfect day to celebrate and support them by choosing to Shop Small. Enjoy discounts, giveaways, in-store events. Every purchase made at a Myrtle Avenue business gives shoppers a chance to win a $200 Myrtle Avenue shopping spree. To enter bring receipts to the #ShopMyrtle Station at Myrtle & Clinton between 12pm-3pm. And stop in to Brooklyn Brazilian Jiu Jitsu for free demonstrations and discount sign-up.

Unbought & Unbowed Bailey’s Café 324 Malcolm X Bvd. 5:30-7:30pm $15 online, $25 at the door. This one-woman play written and performed by Ingrid Griffith, is the journey of Brooklyn’s Shirley Chisholm, born to West Indian immigrants, who, after realizing her family’s plight was all too common in America, found the courage to challenge the all-boys’ network and the white political machine. Tickets at Eventbrite.

Les Miserables Cinema Village 22 East 12th St, Manhattan 8:30pm $13. This “social drama” by African filmmaker Ladi Ly won the Cannes Jury Prize and was France’s submission for Best Foreign Film at the 2019 Oscars. It comes to NYC at the African Diaspora International Film Festival. The plot: Stephane joins an anti-crime squad in a volatile district within a Paris suburb and is surprised by the aggressive rioting tactics building in the area. When a child captures drone footage of a controversial arrest, law enforcement desperately attempts to confiscate the video. French w/English Subtitles. Advance tickets at Eventbrite.