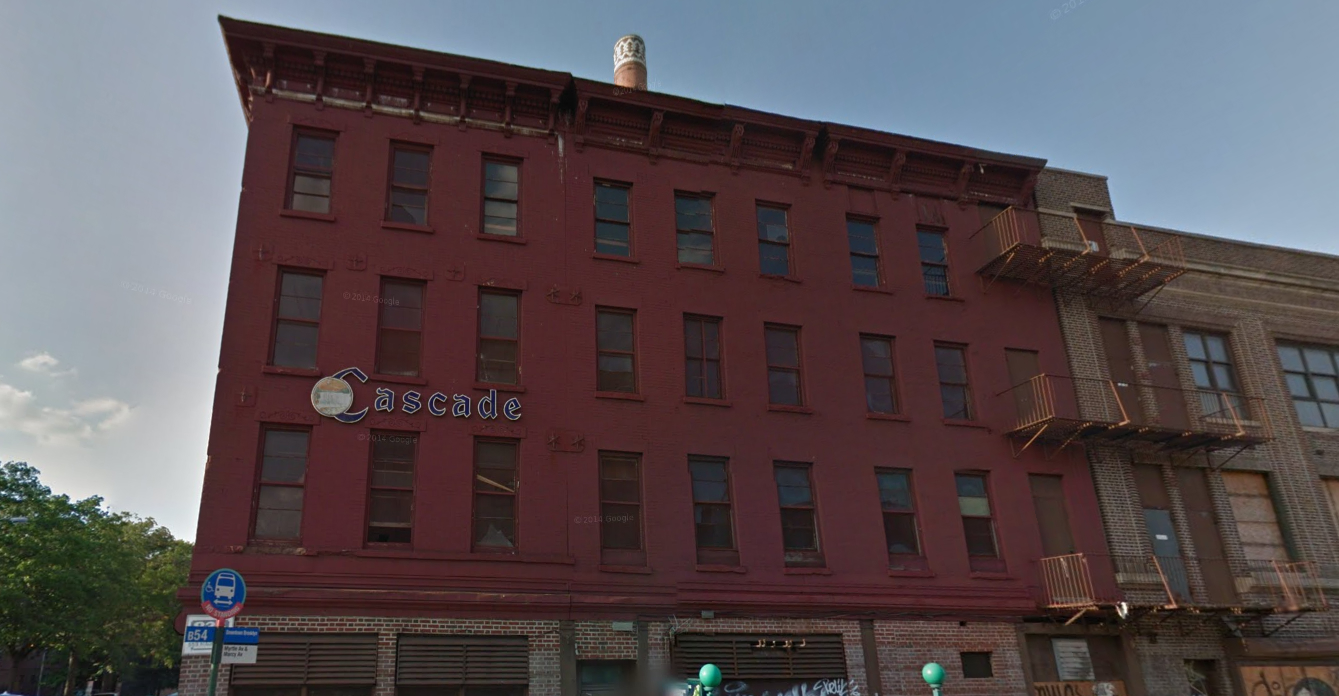 Cascade Linen Factory soon to be site of new housing and a fresh food store.

It was the application for a fresh food market at the site of the long-gone Cascade Laundry Company on Myrtle Avenue that began investigations by Community Board 3’s committees on Housing, Land Use and Transportation, and Sanitation and Environment that caused the issue to be placed on the agenda of the Public Hearing portion of the board’s next-to-last meeting at the Job Corps facility at DeKalb and Nostrand Avenues.

Chair of Land Use, C. Doris Pinn, introduced the item as an application for certification for a fresh food store at 553 Marcy / 869 Myrtle Avenues to be built in connection with the development of the site.

The presenter, Stefanie Morazzi, from the law firm of Slater & Beckerman, said the owners were asking for a letter of support for the store application because the city allows that for every square foot of fresh food store, an extra square foot of residential floor area can be added up to 20,000 square feet.

Ms. Morazzi said that the site is split between two zoning districts.  One is an R-6A along Stockton Street, allowing three residential buildings 6 stories high.  The balance of the site is zoned R-17, and there will be one 9-story building, two 10-story buildings and one 8-story building.  The extra height is allowed if affordable housing is part of the project and of the 301 total units, 66 are to be affordable.

Because this was a Public Hearing, questions could be asked and there were several.

Ms. Morazzi said: “The development falls under the Inclusionary Program, meaning it (minimum income to qualify for affordable housing) has to be 80% of the AMI (Area Median Income)”; adding: “I don’t know off-hand what that comes to.”

Fortunately, the community outreach representative of Brooklyn NHS was able to provide the information, seemingly with the aid of Google, and said “the AMI for a family of four is $86,300”, 80% of which is $69,040.

Asked: “Will persons in the community have priority on those affordable units?” Morazzi responded, “I believe HPD has a 50% community preference for all affordable housing units”.

Religious Intentions of the Owners

The intentions of the owners was also questioned, referencing articles in The Real Deal, a real estate industry paper, that Hasidic investors Abraham Brach, Nachman Liebowitch and Fishel Deitch were planning  a “large religious housing development” at the  “former Cascade Linen factory site”.  The report goes on to say, “The housing would be marketed to families and other members of the Orthodox Jewish community”.

Stressing the importance of community involvement, Butler reminded all that the committee meetings are open to the public and to go to the website, cb3brooklyn.org, for committee schedule information.

The environmental issues on the site were also brought into question.  The environmental representative said that all of the soil with contaminates of petroleum from oil tanks, cleaning fluid, etc. would be removed by the owner who requested an “unrestricted use” environmental rating for the property.  “All of the soil will be removed in the excavation, which is basically digging out the soil for the foundation.”  As an incentive to remove the contaminated soil, we will give them a tax credit, for removing the soil they would have had to remove anyway to lay the foundation.

Regarding the cleanup, District Manager Butler (several times) noted that the NY State Department of Environment and Conservation (DEC) has the responsibility to monitor the cleanup process.

Nelson Stoute added: “Just so you know, it was Mr. Michael McCaw, vice-chair of the Land Use Committee, and myself as chair of the Sanitation Committee, that raised the issue of the environmental concerns here.  They came with a fresh market as Mr. Butler said and they can do that as-of-right.  We raised the question of environmental safety on a brownfield. Know that only because we raised those questions are we getting this information.”  Stoute ended saying,   “The committees are very important.  You need to attend the public meetings of the committees because (that is where) there is in-depth information that can be investigated and carried forward.”

Butler reiterated that the project is a private development that can proceed “as-of-right” and not an issue that the board takes a vote on.