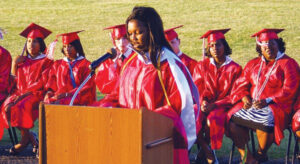 www.globalchange.gov
Earth’s climate is now changing faster than at any point in the history of modern civilization, primarily as a result of human activities. Global climate change has already resulted in a wide range of impacts across every region of the country and many sectors of the economy that are expected to grow in the coming decades.

The Fourth National Climate Assessment (NCA4), developed by the U.S. Global Change Research Program (USGCRP), is a state-of-the-science synthesis of climate knowledge, impacts, and trends across U.S. regions and sectors to inform decision making and resilience-building activities across the country. It is the most comprehensive and authoritative assessment to date on the state of knowledge
of current and future impacts of climate change on society in the United States.

What’s Happening & Why
Thousands of studies conducted by researchers around the world have documented increases in temperature at Earth’s surface, as well as in the atmosphere and oceans. Many other aspects of global climate are changing as well. High temperature extremes and heavy precipitation events are increasing, glaciers and snow cover are shrinking, and sea ice is retreating. Seas are warming, rising, and becoming more acidic, and flooding is become more frequent along the U.S. coastline. Growing seasons are longer, and large wildfires occur more frequently. Many species are moving to new locations, and changes in the seasonal timing of important biological events are occurring in response to climate change.
These trends are all consistent with a warming world and are expected to continue.

Many lines of evidence demonstrate that human activities, especially emissions of heat-trapping greenhouse gases from fossil fuel combustion, deforestation, and land-use change, are primarily responsible for the climate changes observed in the industrial era, especially over the last six decades. The atmospheric concentration of carbon dioxide, the largest contributor to human-caused warming, has increased by about 40% over the industrial era. This change has intensified the natural greenhouse effect, driving an increase in global surface temperatures and other widespread changes in Earth’s climate that are unprecedented in the history of modern civilization.

Greenhouse gas emissions from human activities will continue to affect Earth’s climate for decades and even centuries. Humans are adding carbon dioxide to the atmosphere at a rate far greater than it is removed by natural processes, creating a long-lived reservoir of the gas in the atmosphere and oceans that is driving the climate to a warmer and warmer state.

Beyond the next few decades, how much the climate changes will depend primarily on the amount of greenhouse gases emitted into the atmosphere; how much of those greenhouse gases are absorbed by the ocean, the biosphere, and other sinks; and how sensitive Earth’s climate is to those emissions.

Impacts on Society
Climate change is affecting the American people in far-reaching ways. Impacts related to climate change are evident across regions and in many sectors important to society—such as human health, agriculture and food security, water supply, transportation, energy, ecosystems, and others—and are expected to become increasingly disruptive throughout this century and beyond.
Climate change affects human health and wellbeing through more extreme weather events and wildfires, decreased air quality, and diseases transmitted by insects, food, and water. Climate disruptions to agriculture have been increasing and are projected to become more severe over this century, a trend that would diminish the security of America’s food supply. Surface and groundwater supplies in some regions are already stressed, and water quality is diminishing in many areas, in part due to increasing sediment and contaminant concentrations after heavy downpours.

The capacity of ecosystems like forests, barrier beaches, and wetlands to buffer the impacts of extreme events like fires, floods, and severe storms is being overwhelmed. The rising temperature and changing chemistry of ocean water is combining with other stresses, such as overfishing and pollution, to alter marine-based food production and harm fishing communities.

Some climate changes currently have beneficial effects for specific sectors or regions. For example, current benefits of warming include longer growing seasons for agriculture and longer ice-free seasons for shipping on the Great Lakes. At the same time, however, longer growing seasons, along with higher temperatures and carbon dioxide levels, can increase pollen production, intensifying and lengthening the allergy season. Longer ice-free periods on the Great Lakes can result in more lake-effect snowfalls.

Today, these and other aspects of climate change are having increasingly complex and important impacts on the American economy and quality of life.

Response Options
The impacts of global climate change in the United States are already being felt and are projected to intensify in the future, especially without further action to reduce climate-related risks. As the impacts of climate change grow, Americans face decisions about how to respond.
Actions to prepare for and adjust to changing climate conditions—thereby reducing negative impacts or taking advantage of new opportunities—are known as adaptation. The other major category of response options—known as mitigation—involves efforts to reduce the amount and speed of future climate change by limiting emissions or removing carbon dioxide from the atmosphere. Adaptation and mitigation actions are linked in multiple ways and can be considered complementary strategies—mitigation efforts can reduce future risks, while adaptation can minimize the consequences of changes that are already happening as a result of past and present emissions.