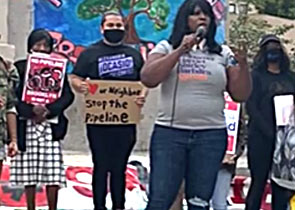 The Black and Brown communities have been under attack by the forces of environmental voices for many years. Residents and housing development tenements sounded the alarm about lead and sanitation issues for years, even though their cries fell on primarily deaf ears.
Now, the issues are trending nationally, but the spotlight still tends to miss the Black and Brown electeds and advocates and community who call attention to the poisons affecting their neighbors and constituents.

State Assemblywoman Latrice Walker (D-55) represents a section of New York City that National Grid has selected to snake a gas pipeline through, including Ocean Hill-Brownsville, East New York, Bedford-Stuyvesant, Crown Heights, Bushwick, and Cypress Hills. And from it will spew or leak all the mess that makes environmentalists sick.

Walker, who is Chair of the Subcommittee on Renewable Energy and the Association of Black and Puerto Rican Legislators, is particularly concerned for the neighborhood in which she raised, and so are her associates: Councilmember Alicka Ampry-Samuel (CD-41), Councilmember Inez Barron (CD42), Assemblymember N. Nick Perry (AD-58), Assemblymember Charles Barron (AD-60), Senator Zellnor Y. Myrie (SD-20), Congresswoman Yvette D. Clarke (NY-09), and Congresswoman Hakeem Jeffries (NY-08). They’ve all denounced the Metropolitan Natural Gas Reliabitly Project (the “pipeline” or MRI project’). And for the past few months they’ve banded with community stakeholders, including the Nehemiah Homemowners Association, the Brownsville Residents GreenCommitte and the Ocean -Hill Brownville Coaliton of Yourn Professionals, and residents.

On December 3, a press release from the Mayor’s office announced his joining up with “the advocates and elected officials” to call on National Grid to halt the North Brooklyn Pipeline project. States Assemblwoman Walker’s comments were not in the release. However, she issued her own in response. Portions of her statement follow:

Latrice Walker
State Assemblywoman and Chair,Subcommittee on Renewable Energy
It is courageous to tell a major corporation that it must stop the pattern of environmental injustice.
That’s precisely what Mayor Bill de Blasio did when he joined (us).
Thank you, Mayor de Blasio, for announcing what the rest of us already knew.
An international corporation such as National Grid knows better and should have used better judgment when deciding on the environmental course of our community.
An environmentally dangerous pipeline in one of our densest, primarily African American communities is unacceptable.
The last thing my neighbors need is another environmentally hazardous, potentially cancer-causing project, undertaken by a major corporation running through another Black Community.
Just because so many of us are underserved doesn’t mean we are not smart. We know what this pipeline would be. Stopping it is critical to the health, safety, and welfare of the people I serve.
We appreciate your joining with us to stop environmental racism in Brownsville.
Today, Thursday, December 3rd, The Mayor joins in our community’s call to stop the MRI pipeline project. The residents of Brownsville stood firm with their voices to demand that the MRI pipeline be stopped immediately. The Nehemiah Homeowners Association, the
Brownsville Residents Green Committee, and the Ocean – Hill Brownsville Coalition of Young Professionals stood steadfast in their call for the MRI pipeline to be stopped permanently.
There has been more than enough proof provided by various sources that this pipeline has a high probability of becoming a stranded asset, which would leave the residents to foot the bill for the pipeline as city and state climate laws are implemented, not to mention the pipeline would contribute carbon monoxide and methane to the atmosphere, thereby accelerating climate change and its impacts on coastal metropolises like New York City
While we commend the Mayor for using his voice to call an end to this unnecessary pipeline project and wait for the permits to be pulled, we are not done.
We are committed to ensuring that our community receives environmental justice. We must continue our demands for clean and renewable energy systems in our community. We want an end to the greenhouse emissions and criteria air pollutants in our community. These and other variables lead to the negative and far too often disproportionate respiratory and other health issues that many residents suffer from.
This is a notice that every voice in New York counts, and I am not going to allow the people of Brownsville to be sacrificed so that big business can make more money.
When the Brownsville community is not given the respect and consideration it deserves, we will be heard and demand action. Brownsville is entitled to the same clean and renewable energy solutions as other neighborhoods.
Following are the statements by Mayor Bill de Blasio and other “advocates and elected officials” calling on National Grid to halt the North Brooklyn Pipeline project included in a press release issued by the City Hall press office, Thursday morning December 3.

The North Brooklyn Pipeline Project
Bill de Blasio, Mayor,
City of New York
Climate change is an existential threat to our city and we must transition quickly to clean energy. Today, I am voicing my opposition to National Grid’s North Brooklyn Pipeline because we cannot justify the environmental impacts on the largely Black and Brown residents of Brooklyn associated with an unnecessary pipeline expansion. Racial and environmental justice go hand-in-hand, and National Grid has failed to clearly demonstrate that this pipeline is needed to keep New Yorkers warm and safe. I am calling on them to withdraw this project immediately.

Daniel Zarrilli, NYC’s Chief Climate Policy Advisor.
Our climate crisis demands an end to new fossil fuel infrastructure, here in New York City and around the globe. Even in this moment as federal climate leadership is poised to re-emerge, it is clear that cities like New York will need to continue raising their climate ambitions. Earlier this year, Mayor de Blasio signed a ground-breaking executive order opposing new fossil fuel infrastructure serving our city and we are following through on that pledge. That’s why we are divesting our pensions from fossil fuels, investing billions into job-creating climate solutions like solar, wind, and hydro, and fighting destructive projects like the Williams pipeline and the North Brooklyn pipeline that are undermining our future.

Kim Fraczek, Director, Sane Energy Project, and co-founding member of No NBK Pipeline Coalition
With the Mayor’s announcement against National Grid’s fracked gas pipeline, there is now unanimous opposition from local city, state, and federal elected officials and tens of thousands of New Yorkers in the affected areas from Brownsville to Greenpoint. So far National Grid has ignored the will of the people and continued construction, but New York City is united against their plans to lock us in to decades of raising our rates for more fossil fuels, pollution, and climate chaos for their private profit. We look forward to continuing our work with the Mayor’s office as we operationalize the Executive Order to end the expansion of fossil fuel infrastructure, like the LNG facility at the apex of the North Brooklyn Pipeline.
Gabriel Jamison, Founding Member, Brownsville Residents Green Committee.
We have to prioritize lower income communities of color that have been stripped of resources and exploited for profit for too long. We’re calling on our elected officials to fight this pipeline with sustainable love through environmental practices. Restorative justice includes environmental justice for the Black and Brown communities. Going forward, we must foster bold solutions that would prevent projects like the Metropolitan Reliability Infrastructure (North Brooklyn Pipeline) from ever being constructed in this neighborhood. We need more investments in sustainable development, green spaces, clean energy and processes that reflect social inclusion and equity for our community. Brownsville is not a sacrifice zone.
Alex Beauchamp, Northeast Region Director, Food & Water Watch and member, No NBK Pipeline Coalition.
“Mayor de Blasio’s opposition to the North Brooklyn fracked gas pipeline is welcome news and yet another clear signal that New Yorkers will never allow National Grid to double down on fossil fuels. It’s obvious that we must not build infrastructure that will lock us into decades of ruinous reliance on fossil fuels. We’re proud to stand united with Mayor de Blasio and New Yorkers from all five boroughs in opposition to the North Brooklyn Pipeline and all other new fossil fuel projects.

Rachel Rivera, member of New York Communities for Change
As a Brownsville resident and Sandy survivor, it’s good to see the City oppose this polluting project. It’s time to go off fracked gas. It makes no sense to build entirely new gas infrastructure, and then let National Grid stick all of us with the bill.

State Senator Zellnor Myrie
Throughout our history, Black and Brown communities have borne the brunt of environmental neglect and systemic racism. Today we say ‘enough.’ This is why I have stood in opposition to the North Brooklyn pipeline’s expansion through Brownsville and stand with the community’s demand that this project be withdrawn,” said .

Assembly Member Robert Carroll
I commend Mayor de Blasio for joining me and many other elected officials and activists in calling for the halt of the North Brooklyn Pipeline project. If New York is to meet its ambitious goals of reducing carbon emissions by 80% by 2040, we must stop investing in dirty fossil fuel infrastructure that is meant to last for decades,” said

Council Member
Costa Constantinides
I am proud to lend my voice to the frontline communities that have fought hard against the North Brooklyn Pipeline project,” said . “Every day that fossil fuels are burned in our city adds to the climate burden borne disproportionately by communities of color. We owe it to these communities to stand against new fossil fuel infrastructure and instead support a just transition to renewables.

Council Member Antonio Reynoso
The time to stop the use of fossil fuels is now. Our community knows this all too well and it was the hard work of a group of tireless advocates that put this on the City’s radar and led to today’s announcement from Mayor de Blasio that he would oppose any further work by National Grid on the North Brooklyn pipeline. We are no stranger to environmental justice fights in North Brooklyn, however this fight impacted multiple black and brown communities across the borough. The time has come to begin grappling with the environmental racism that impacts marginalized communities to this day. Today’s announcement is a great first step, but we have so much more to do. I want to thank the advocates who worked so hard to make today’s announcement a reality. I am also redoubling my commitment to deliver environmental justice to communities across the City who continue to grapple with systemic injustice in our society.