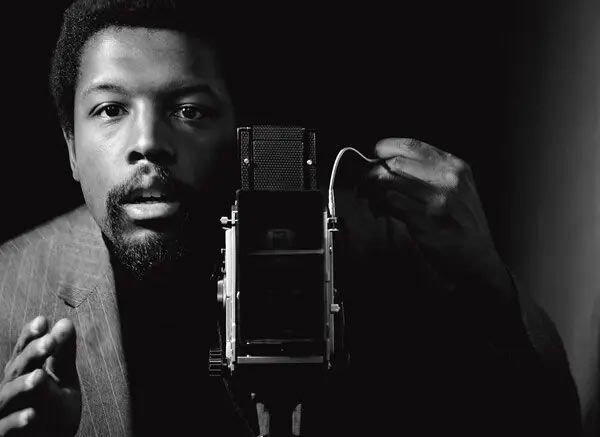 The Photography of Kwame Brathwaite

On view through January 15, 2023, the Black Is Beautiful: The Photography of Kwame Brathwaite touring exhibition opened to acclaim last summer at the New-York Historical Society. Featured are 40 large-scale color and black-and-white photographs that document how Brathwaite helped change America’s political and cultural landscape during what is referred to as the Second Harlem Renaissance. Indeed Kwame, as we know him, was ahead of his time, then and sixty years hence.

He used his art to affirm Black physical beauty, celebrate African American community and identity, and reflect the vibrancy of Harlem, from its people to its heralded cultural and performing arts scenes to its local businesses to its architecture and myriad events.
At the time of the opening, Kwame S. Brathwaite, son of the photographer, said, “This stop … is especially meaningful because this is a New-York story. My father was born in Brooklyn, raised in the Bronx, and resides in Manhattan. These images introduce us to the origin of the Black is Beautiful movement that started in Harlem and show us how art, politics, music, and fashion combined to inspire, empower and change the status quo.”

In Aperture’s book, “Kwame Brathwaite: Black is Beautiful,” the photojournalist wrote: “I have often been asked how I was granted so much access as a photographer. It was the fact that people trusted me to get it right, to tell the truth in my work. I wanted viewers to feel that they were having this experience through my eyes, through my lens, as if they were there themselves.
“My goal has always been to pass that legacy on and make sure that for generations to come, everyone who sees my work knows the greatness of our people.”
The words of Dr. Louise Mirrer, president and CEO of New-York Historical, are an affirmation of Kwame’s greatness and “a testament to the power of a visual medium to impact the movement towards racial equity. We hope his photographs inspire a deeper understanding of the Black empowerment movement and how its legacy resonates today.”
Over the years, his timeless photographs have done just that: Resonate like the djembe of the ancient Mandinka people.
Comments about Kwame’s legacy to writers Tanisha Ford and Deborah Willis in Aperture’s “Black is Beautiful” flow like the Nile:

“From Beyoncé to Barack Obama, it’s hard to think of a black figure who does not owe their prominence, in some measure, to the ethos of ‘Black is Beautiful’” —Ekow Eshun, Financial Times
“The Brooklyn-born photographer spent his career working to elevate natural black beauty during a time when the fashion industry was resistant.” —The Guardian
“Together, the exhibition and the monograph are important footnotes to a slogan that has become both a state of mind and a revolutionary movement.” —Hyperallergic
“Through Brathwaite’s delicate and compassionate eye, the black female form, unadulterated in appearance, gave a new visual language that helped heal centuries-old white supremacist wounds. The Grandassa models were an idealization of a black female utopia, which reinvigorated a limitless Africa that carried all the dialects, languages, accents, and subcultures within one womb. Brathwaite did not depict the black woman as what she could be, but as what she had always been, her beauty a constant and not something to be fixed.” —Morgan Jerkins, Artsy

Exhibition Highlights
The exhibition chronicles Brathwaite’s evolution as an activist and artist. Born in Brooklyn in 1938 and raised in the Bronx, Brathwaite was still a teenager when he saw the horrific photographs of Emmett Till in his open casket published in Jet magazine in 1955. For Brathwaite, as for so many people, the impact of those photographs was decisive. As the son of a Caribbean American family, Brathwaite was also greatly influenced by the ongoing Pan-Africanist legacy of the Jamaican-born activist Marcus Garvey.

With his brother Elombe, Brathwaite founded the African Jazz-Art Society & Studios (AJASS) and organized concerts featuring jazz luminaries such as Miles Davis, Abbey Lincoln, and Max Roach. In addition to promoting musical events, the group advanced a message of economic empowerment and political consciousness in the Harlem community, emphasizing the power of self-presentation and style. “Think Black; Buy Black” became a rallying cry.

In the 1960s, Brathwaite and his collective also sought to address how white conceptions of beauty and body image affected Black women and culture. To do so, they popularized the transformative idea “Black Is Beautiful” and founded Grandassa Models, a group of Black women of varying backgrounds from the community who embraced natural hairstyles and their African ancestry. The modeling troupe sought to counter both the slight, androgynous figure made famous by 1960s British supermodels Jean Shrimpton and Twiggy and the ubiquity of lighter-complexioned, straight-haired Black models in Black-owned publications such as Ebony. Alongside striking photographs of Grandassa models, the exhibition features several dresses and jewelry worn by the women.

Special to New-York Historical’s display of the exhibition is a new audio guide available on the Bloomberg Connects app. The audio provides context about the “Black Is Beautiful” movement, the African Jazz-Art Society & Studios, and the Grandassa Models. The audio guide also explores other topics explored in the exhibition, including jazz, Black activism, natural beauty, fashion, and Harlem during the period depicted in Brathwaite’s photographs.
Organized by Aperture in partnership with Kwame S. Brathwaite, Brathwaite’s son and director of the Kwame Brathwaite Archive, the photographs—mostly shot in Harlem and the Bronx—tell a story of a movement and a time. Following its presentation at New-York Historical, the exhibition travels to the University of Alabama at Birmingham for the Abroms‐Engel Institute for the Visual Arts in February 2023.
The exhibition is accompanied by the first monograph dedicated to Kwame Brathwaite. Featuring essays by Tanisha C. Ford and Deborah Willis and more than 80 images, Kwame Brathwaite: Black Is Beautiful (Aperture, 2019) offers a long-overdue exploration of Brathwaite’s life and work and is available from the NYHistory Store.

About Kwame Brathwaite
Kwame Brathwaite (b. Brooklyn, New-York, 1938) lives and works in New-York. His photographs have been included in solo and group exhibitions at Philip Martin Gallery, Los Angeles; David Nolan Gallery, New-York; and the Museum of the City of New-York; and published in Aperture, the New-Yorker, New-York Times, and New-York magazine. Brathwaite’s photography is held in public and private collections, including those of the Block Museum of Art, Northwestern University, Evanston, Illinois; Frances Young Tang Teaching Museum and Art Gallery at Skidmore College, Saratoga Springs, New-York; MIT List Visual Arts Center, Cambridge, Massachusetts; Museum of the City of New-York; Museum of Modern Art, New-York; Santa Barbara Museum of Art, California; and Whitney Museum of American Art, New-York. Organized by Aperture, Black Is Beautiful: The Photography of Kwame Brathwaite was first presented at the Skirball Cultural Center, Los Angeles, in 2019.
Programming
October 19, 2022, photographer Kwame Brathwaite Jr. and historian Tanisha Ford, with moderator Khalil Gibran Muhammad discussed the exhibition and legacy of the photographs on view.
Special family programs related to the exhibition will take place in 2023 during Martin Luther King Jr. weekend.
Private group tours can also be arranged throughout the exhibition’s run.
Support
Major support for Black is Beautiful: The Photography of Kwame Brathwaite at New-York Historical is provided by Bank of America and Agnes Gund. The exhibition and the accompanying Aperture publication are made possible, in part, with generous support from the National Endowment for the Arts and the Photographic Arts Council Los Angeles. Exhibitions at New-York Historical are made possible by Dr. Agnes Hsu-Tang and Oscar Tang, the Saunders Trust for American History, the Evelyn & Seymour Neuman Fund, the New-York City Department of Cultural Affairs in partnership with the City Council, and the New-York State Council on the Arts with the support of the Office of the Governor and the New-York State Legislature.

About the New-York Historical Society
A great destination for history since 1804, the Museum and the Patricia D. Klingenstein Library convey the stories of the city and nation’s diverse populations, expanding our understanding of who we are as Americans and how we came to be. Ever-rising to the challenge of bringing little or unknown histories to light, New-York Historical will soon inaugurate a new annex housing its Academy for American Democracy as well as the American LGBTQ+ Museum. These latest efforts to help forge the future by documenting the past join New-York Historical’s DiMenna Children’s History Museum and Center for Women’s History. Digital exhibitions, apps, and our For the Ages podcast make it possible for visitors everywhere to dive more deeply into history.
For more information, visit nyhistory.org or at @nyhistory on Facebook, Twitter, Instagram, YouTube, and Tumblr. For Museum, Library and Store Hours, 212-873-3400
(This story is a compilation of notes by Bernice Elizabeth Green, text from NYHS press information and other sources.)