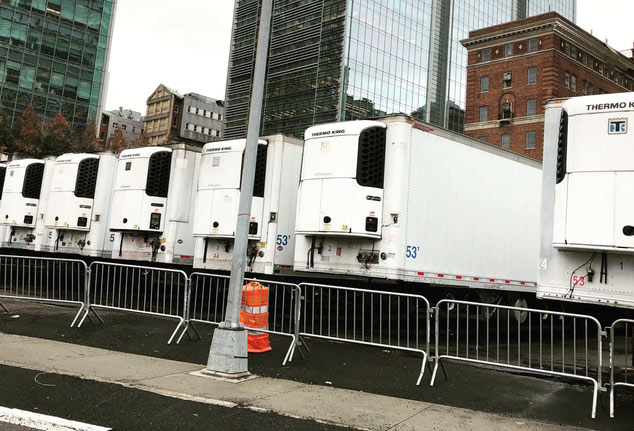 Editors Note: the absolute best local coverage of the coronavirus in New York is at www.gothamist.com. Read and donate!

Data is emerging showing major racial disparities in coronavirus death rates across the country. In Chicago, 70% of COVID-19 fatalities have been Black residents, despite making up less than 30% of the population. In New York City, coronavirus patients from the Bronx, which has large Black and Latinx populations, are twice as likely to die from the infection as elsewhere in the city. City and public health officials say the disproportionately higher rate is due to a greater number of underlying health conditions, such as diabetes and asthma, lack of access to testing and healthcare, and poor conditions in public housing that promote the spread of the disease. New Orleans, a majority-Black city, now has the highest coronavirus death rate in the entire country.
New York City may soon be forced to bury bodies in temporary mass graves on public land, as the number of COVID-19 fatalities exceeds the available capacity of local funeral homes and cemeteries.
City Councilman Mark Levine detailed the “gruesome reality” in a series of tweets on Monday, explaining that even the refrigeration trucks deployed by the Office of the Medical Examiner would soon be out of space. As a result, the city was looking at “temporary interment” sites, where bodies could be buried in trenches ten in a row.
“There are going to be thousands of more people who will die, and we need the resources to manage that in a dignified and orderly way,” Levine told Gothamist. The “ultimate goal,” he added, was to avoid the tragic circumstances seen in Italy, where scores of caskets were left awaiting burials in local churches and halls.
A spokesperson for the Mayor’s Office later clarified that this would not be done at local parks, as Levine initially indicated.
We are NOT currently planning to use local parks as burial grounds. We are exploring using Hart Island for temporary burials, if the need grows.
During a press conference on Monday morning, Mayor Bill de Blasio acknowledged that the city was exploring temporary burials for victims of COVID-19. He declined to go into details about the plan, beyond noting that Hart Island, a Bronx location previously used a burial site for the city’s indigent dead, was “the place we have used historically.”
Governor Andrew Cuomo also declined to elaborate on the plans, calling the idea of mass graves in city parks a “wild rumor.”
A 2008 report from the Chief Medical Examiner about managing an influenza pandemic references the possibility of “temporary interment” on Hart Island in the Bronx for up to 19,200 people. The city has reportedly offered to pay detainees on Rikers Island to dig the mass graves on the island.
The planning comes as the city’s morgues, funeral homes and cemeteries buckle under the rising death toll from the virus, which reached 2,475 on Monday morning. The makeshift morgue trucks deployed to city hospitals, known as “Body Containment Points,” are “mostly full,” Levine said.
A spokesperson for the Office of Emergency management said that 80 refrigerated trucks had been dispatched to hospitals across the city and they were monitoring morgue capacity, but declined to give specifics.
Speaking to Gothamist, Levine said the plans for temporary graves was more than just a hypothetical. “I think [people] have not wanted to talk about the system for bodies because it’s very hard to talk about,” he said.

Emerging from the Shadows

Congress Approved The $2 Trillion Relief Package. When Can I Expect My Check?