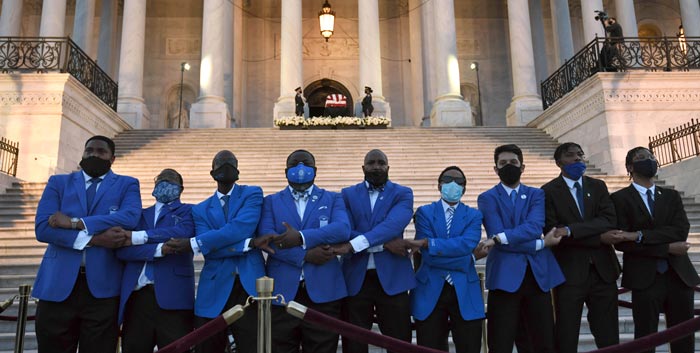 Biden’s proposal is the latest effort to connect with Black voters and show how much Black men have to lose under four more years of Trump.

Written by BET Staff
Just a few days ago, President Donald Trump unveiled his Platinum Plan for Black America at a campaign stop in Atlanta. Amongst other things, the plan promises more loans for Black businesses, better and cheaper healthcare and more education opportunities for African American. Now, the Biden/Harris camp is fighting back not only by highlighting the platinum plan’s shortfalls, but the ways in which they plan to empower Black voters, especially men.
In response to Trump’s plan, Biden for President Director of Strategic Communications Kamau Marshall released a statement explaining exactly why Black voters, especially Black men, should reflect on the last four years as they consider their vote this November.
“In 2016, President Trump asked Black Americans ‘What the hell do you have to lose?’ The answer was everything. President Trump has been in office for nearly four years and the results have been devastating for Black Americans. Trump lied about the danger of COVID-19 and failed to contain the virus and tens of thousands of Black Americans have lost their lives,» said Marshall. «More than 1.5 million additional Black Americans are unemployed than at the same time last year and 400,000 small businesses have closed because of the economic fallout from the crisis. Now with 39 days to the election, Trump is making more empty promises. Black voters won’t fall for it. They know that Vice President Biden and Senator Harris are the candidates in the race with a real plan to create jobs, address racial equity, close the racial wealth and income gaps, and lower health care costs. And, while President Trump fans the flames of race and division, Joe Biden and Kamala Harris will bring Americans together to advance racial equity and root out systemic racism.”
Marshall goes on to point out the various ways the Biden/Harris campaign believes Trump has indeed failed Black America including the level of unpreparedness in the response to the spread of COVID-19 and its devastating impact on Black-owned businesses, which has led to an historic record of unemployed Black men.  In addition, Marshall accuses Trump of sabotaging Black mens’ access to healthcare during a pandemic, the President’s need to inflame racial violence while dividing the nation and the President’s hand in making Black children vulnerable to abuse and injustice in schools by stripping their protections against discrimination and excessive discipline.
In strict contrast of the “platinum plan,” Marshall provides specific details on how Biden and Harris propose to invest in Black men starting with the following examples:
Help Black Men Create Opportunity and Wealth.  Biden’s plan to Build Back Better will make historic investments to advance racial equity across the American economy to close the racial wealth gap, opportunity gap, and jobs gap. For starters, increasing the minimum wage to $15 an hour would give nearly 40% of Black worker  a pay raise.
Reduce Incarceration. Biden has a plan to reduce prison and jail populations while increasing safety at the same time and put us on a path that begins to cure the staggering racial disparities in our criminal justice system. This includes reducing the footprint of incarceration in our country’s jails and prisons by supporting bail reform, eliminating mandatory minimums, and investing in local mental health and substance use disorder services.
Tackle Health Inequities and Expand Access to Affordable Health Care. Biden has a plan to  protect and build on Obamacare to ensure access to high-quality, affordable care, including by providing Black Americans with a new public health insurance option and lowering their health care costs for African Americans enrolled in Obamacare plans. They will start by increasing the value of premium tax credits, lowering premium and and making it more affordable for African Americans to purchase plans with lower deductibles and out-of-pocket spending.
Expand Education Opportunities and Make Higher Education Affordable for Black Men. Biden has a plan to expand access to high-quality education and tackle racial inequity in our education system by making sure that Black Americans can attend community college and job training programs without debt and making public colleges and universities tuition-free for families earning under $125,000 (including 90% of Black families). Under a Biden administration, we’re also being promised an investment in wraparound support for community college students, from textbook and transportation costs to faculty mentoring, tutoring, and peer support groups.
Protect the Voting Rights of Black Men. Biden has a plan to make the right to vote real for African Americans by instituting advance automatic voter registration, same-day voter registration; work to end gerrymandering; and protect our voting systems from foreign interference. Biden also want to nominate his own pick for U.S. Supreme Court justices and federal judges who look like America, are committed to the rule of law, understand the importance of individual civil rights and civil liberties in a democratic society, and respect foundational precedents like Brown vs. Board of Education.
Address Environmental Injustices that Impact Black Communities. Biden has a plan to make historic investments in accessible transit and transportation, clean up legacy pollution, and build clean water infrastructure in Black communities. He will start by addressing the public health crisis that happened to the majority-Black population in Flint – exposing children and families to lead contamination, but won’t stop there. He’ll make sure that it never be allowed to happen again.

The Collected Quotes of Donald Trump on “the Blacks”