At the Heart of What Matters
Advertisement 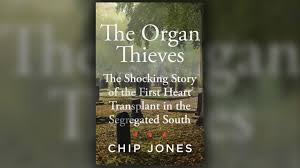 It’s no secret that the nation has seen a disproportionate loss of life among Black Americans in our medical system. That was the case in May 1968, when Bruce Tucker, a Black factory worker, suffered a skull fracture and was rushed to the Medical College of Virginia (MCV). In less than 24 hours, the MCV surgeons had transplanted Tucker’s heart into the chest of a white businessman, prompting America’s first civil lawsuit for the wrongful death of its kind as explored in The Organ Thieves: The Shocking Story of the First Heart Transplant in the Segregated South (Gallery/Jeter Publishing), by Pulitzer Prize nominee and investigative journalist Chip Jones.

For the first time, The Organ Thieves shows how racially biased attitudes fit a broader pattern of discriminatory behavior toward Black patients in the 1960s. Jones uncovers never-before-heard details and new investigative reporting including:

Remembering Chadwick Boseman and the Set of “42”