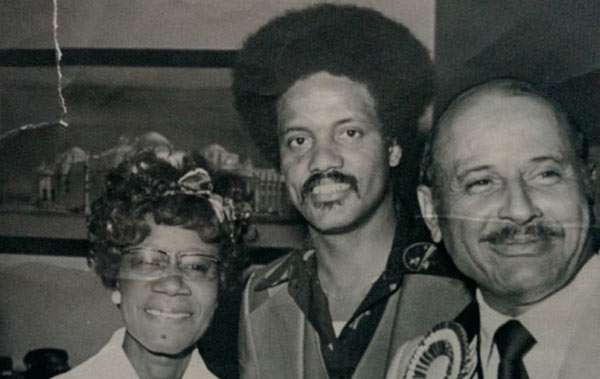 TRAILBLAZER
While serving as the Panamanian Ambassador for the United Nations, Dr. Russell, inspired by Douglas Turner Ward’s fictional play “Day of Absence” in which a small town in the South is suddenly devoid of its Black population and is crippled by their absence, established Black Solidarity Day (BSD) in 1969. BSD is held annually on the Monday before Election Day in November, demonstrates the spirit of self-determination and collective responsibility for economic empowerment. Black people are encouraged not to attend school or work and to abstain from shopping in white establishments.

LEGACY
Many of our present-day activists and luminaries benefit from the legacy Dr. Russell leaves behind. During the 1960’s and 1970’s, Dr. Russell was a primary organizer for the first national conference of Panamanians which was solidifying the movement of the unification of Black and Caribbean pushback on systematic oppression. He was also one of the creators of “Bahiano” which is the first Black newspaper and Panamanian newspaper here in the USA written in both English and Spanish. [Other co-founders noted are Walter Livingston, George Priestly, Aguilla Jimenez and a few others.]
Dr. Russell was professor and Chair of Field Studies at SUNY Old Westbury and at Brooklyn College of the City University of New York (BCCUNY) before becoming Dean of Contemporary Studies. He has also held the position of Acting Director of International of Urban Affairs at Medgar Evers College, CUNY in the late 1980’s- early 1990’s.
In the 1990’s he was a lead curriculum developer, educator, and trainer for the Ella Baker Academy (EBA) [later renamed Ella Baker/ Cleveland Robinson Academy, EBCRA], a program dedicated to create youth leadership using the methodology of “Kingian Nonviolent Conflict Resolution,” as part of the New York State Dr. Martin Luther King, Jr. Commission and Institute in Albany, New York, under the funding and support of Governor Mario Cuomo.
Dr. Russell worked with numerous community organizations throughout his life time. He was a guiding light for many, leading some into successful careers in social justice, finance, and politics in both the US and Panama.

ACTIVISM & CREATIVITY
Dr. Russell graduated from the National Institute in Panama and left Panama in 1955 on a student visa to De Paul University in Chicago, Illinois. He lived and worked on the South Side of Chicago and worked at the Mary McDowell Settlement House. He moved to New York in 1961 and worked at the Albany Community Center in Albany Projects as a youth worker and directly working with gang members. He eventually moved on to the Fort Greene Community Progress Center.
As a creative individual, he published “Miss Anna’s Son Remembers,” which is known as the first book of Panamanian-West Indian poems outside of Panama. Around this time with Anesta Samuel and other cadres, he helped to establish the Panamanian-West Indian Heritage Association inspired by one of the first oral history conferences held in New York City. He also spent many years as a playwright and a producer of community theater, namely “Ode to Panama,” performed on stage at Brooklyn Academy of Music (BAM).
“It has been my honor and privilege to have known Dr. Carlos E. Russell as a personal friend for over 30 years. Dr. Russell is a brilliant, noble and brave scholar committed to the love of Black people and expresses this love in every aspect of his life. He is bold, dynamic and inspiring. His creation of Black Solidarity Day represents a source of pride for the vast number of Black people. We love you Dr. Russell and thank God for all you have done to enrich our lives as people of African Ancestry.” – Cliff Frazier, President, International Communications Association, Dwyer Center; Executive Director, NY Metropolitan Dr. Martin Luther King, Jr. Center for Nonviolence; and Co-Founder of the Harriett Tubman Charter School
(The Institute of the Black World 21st Century (IBW21) www.ibw21.org)

At the Heart of What Matters

What is Black August and how is it Different than Black History Month?