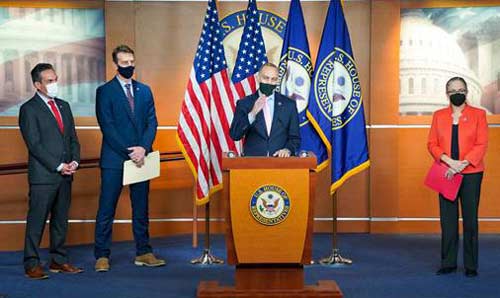 Rep. Jeffries: The American Rescue Plan is meeting the moment in response to the COVID-19 pandemic. Vaccinations are up. Infections are down. $1,400 survival checks are on the way.
This week, important gun violence prevention legislative measures voted on the floor is expected to pass with bipartisan support. America has 4% of the world’s population, 40% of the world’s guns. Because of loopholes that currently exist in the law, many guns find their way into the hands of criminals. We are moving forward with the Bipartisan Background Checks bill, as well as with closing the Charleston loophole.
We taking an important step forward to pass the Right to Organize Act and protect the ability of everyday Americans to collectively bargain, to organize themselves and to be able to speak with a voice that gives them a fair shot to negotiate fair wages, fair health care, fair benefits when up against multinational corporations and intense corporate power.
Rep. Aguilar: The American Rescue Plan will give us the tools to Build Back Better. It’ll put money in people’s pockets. It will cut child poverty in half, and it will give our communities the resources they need to safely reopen schools. It will ramp up vaccination rates to crush this virus. And Republicans in both the House and the Senate uniformly opposed it. We should be clear that this legislation has broad bipartisan support from the American public across the country. House Democrats remain focused on delivering results for the American people to meet this moment, while House Republicans are focused on Dr. Seuss. I’m proud to support this bill, and I look forward to seeing the profound impact that it will have in communities like mine and across this country.

Rep. Bourdeaux: More than 500,000 Americans have died from COVID-19, including over 17,000 Georgians. We’re about to close on another milestone of around a million infected. Hundreds of thousands more are suffering from the long-term impact of the disease. And just a few days ago, I got a letter from a teacher who was on kidney dialysis because of blood clots caused by COVID.  The House sends the American Rescue Plan to President Biden for his signature. We are voting on a bill that will save lives and livelihoods.  The American Rescue Plan will help us get shots in arms, will increase funding for testing, the development of new therapies and the expansion of the public health workforce.

Rep. Mrvan: The United States Democratic Caucus, have a message to the union sisters and brothers: We have your back.

Unions are the backbone of northwest Indiana’s economy. My district is a manufacturing hub and one of the largest steel producing regions in the nation. That success is because of the United Steelworkers. […] For far too long, states and federal policies have targeted unions to weaken their leverage and their position. That changes today. I am proud the House Democrats are leading the way by voting this week on H.R. 842 – the Protecting the Right to Organize Act. When workers stand together and form a union, they have the ability to use a collective voice for fair wages, safe working conditions, improved health benefits and a secure retirement. Organized labor is essential to creating opportunities for individuals to have a good-paying career and a family sustaining job. I am also proud to vote today on the American Rescue Plan. These two measures give a balance and lift up working families. In my opinion, part of our great divide in our nation is workers feel left behind. These two acts lift up workers and give them a chance.

H.R. 1 “For the People Act” Gives Power to the People

BIDEN to the RESCUE