BIDEN to the RESCUE
Advertisement 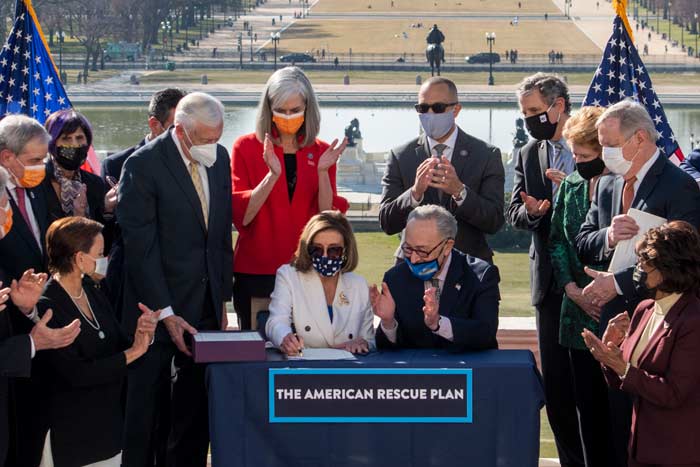 A divided Congress passed a landmark $1.9tn coronavirus relief bill Wednesday, delivering the first major legislative victory of Joe Biden’s presidency and a promise to raise millions of Americans out of poverty.

In a near-party line vote of 220 to 211, the US House of Representatives gave final approval to one of the largest emergency rescue packages in US history. The vote sends to Biden’s desk legislation that he said was critical for steering the US towards the end of the pandemic that has already killed more than half a million Americans.
Biden will sign the bill Friday, in time to prevent millions of Americans from losing the enhanced unemployment benefits that were set to expire.

The sweeping legislation was the culmination of an aggressive push by Biden and Democrats to fulfill their campaign promise to control the virus and deliver economic relief as a first act after securing narrow control of both chambers of Congress and the White House. But the partisan result foreshadows the unforgiving political landscape Biden will face as he attempts to move the rest of his agenda through Congress in the coming months. Despite promising unity and bipartisanship, he was unable to persuade a single Republican to vote for the measure.
Still, Democrats overcame Republican opposition and objections from more conservative members of their caucus to pass what the House speaker, Nancy Pelosi, hailed as “the most consequential legislation that many of us will ever be a party to”.

Biden’s 628-page bill, named the American Rescue Plan, sends direct payments of up to $1,400 to most Americans, expands aid to state, local and tribal governments, provides federal subsidies for those struggling to afford health insurance and increases assistance for housing and food. It would also spend billions of dollars to expand Covid-19 testing and vaccine distribution as part of Biden’s pledge to provide enough doses for “every adult in America” by the end of May.
A new analysis released on Wednesday found the legislation would dramatically reduce the number of Americans living in poverty, particularly among children and people of color.
According to the Washington-based Urban Institute, the relief package would shrink the annual projected poverty rate for 2021 from 13.7% to to 8.7%. It would more than halve the number of children living in poverty, while cutting the poverty rate by roughly 42% for Black Americans, 39% for Hispanic Americans and 34% for white Americans.

The package before the House on Wednesday was narrower than Biden’s initial proposal, which included progressive priorities subsequently either stripped out or scaled back to appease moderates like Joe Manchin of West Virginia.

The Senate-approved version, which passed the chamber in a party-line vote last weekend, tightens eligibility for the $1,400 stimulus checks, which follow the $600 payments issued through the aid bill passed in December, and restructures a proposal for unemployment benefits.
Under the new plan, unemployment benefits will remain at $300 a week but will be extended through the beginning of September, rather than August. The first $10,200 of supplements from 2020 will be made tax-free.

Notably, a provision to raise the federal minimum wage to $15 an hour – a top progressive priority – was deemed inadmissible under a budget process Democrats used to bypass Republican opposition.

“For weeks now, an overwhelming percentage of Americans have made it clear they support the American Rescue Plan,” Biden said in a statement Wednesday. “Today, with final passage in the House of Representatives, their voice has been heard.”