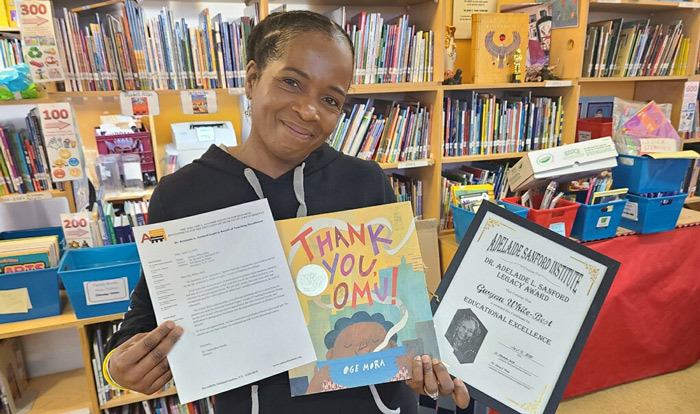 Submitted by Keith Forest
This spring, the Adelaide Sanford Institute paid homage to educators on the frontline during the 2020 pandemic. Educators who closed the social distance gap virtually: they kept schools running although the buildings were closed by taking on cyberspace and crafting virtual classrooms.

ASI, a strong believer in the “education first” factor, has always supported educators as essential workers in the lives of our young people. To show its appreciation for educators, ASI joined forces with School District 16 to honor exceptional teachers with a Dr. Adelaide Sanford Legacy Award.

Named after the pioneer educator, trailblazing scholar, and world-renowned humanitarian that redefined education in low-income communities, The Dr. Adelaide L. Sanford Legacy Award celebrates teaching excellence.
“The Adelaide L. Sanford Institute created the Legacy Award to honor educators who embody the ideals of Dr. Sanford,” said ASI Board Chairman Christopher Smith, EdD. “The awardees of the Legacy award have demonstrated their abilities to empower, uplift and inspire students in an effort to provide the foundations for college and career studies.”

The award program also brings awareness to the outstanding work of educators in the Central Brooklyn district. Smith believes that “For far too long schools and educators that teach in low-income communities have constantly been written off as schools that lack resources and students that are failing”. The ASI awards program seeks to change that narrative by highlighting the innovative work and outstanding scholars that do exist in these schools.

“It became necessary to uplift teaching and learning in the midst of the pandemic,” says Lena Gates Principal of Ronald E. McNair Public School, and ASI member. “Educators are doing amazing work in our district and they deserved to be recognized.

Every month District 16 principals will be asked to nominate a teacher whose work best reflects the award’s core criterion of excellence in performance of duties.

Deborah Paul, Brooklyn Brownstone PS 628; Jessica Walter, The Weeksville School PS 243; Elise Washington, Clara Cardwell, PS 308; Gwynn White-Best, Dr. Ronald E. McNair PS 5.
With a mission to support parents and educators in their efforts to improve central Brooklyn schools, The Adelaide Sanford Institute was established on September 28, 2006 and became incorporated as a 501 (c) (3) non-profit education organization in the state of New York on December 18, 2008. It is funded by donations from individuals, community institutions, corporations, and annual dues paid by the ASI membership.