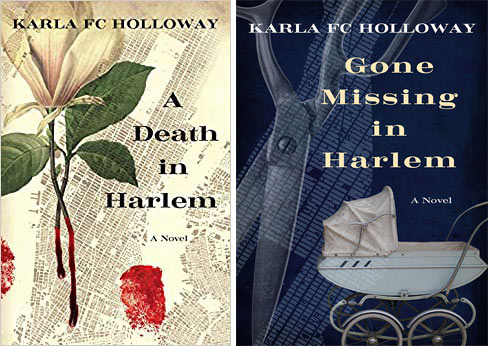 By Dr. Brenda Greene
In the novels, A Death in Harlem and Gone Missing, Karla FC Holloway, the literary scholar, and law professor turned fiction writer, centers post-WWI Harlem and the Harlem Renaissance in two black mysteries that reflect how race and class impact the response to death and abduction in the lives of Black families. These novels, steeped in historical details of the 1920s and 1930s, represent Holloway’s “In Harlem” series.

Holloway uses the backdrop of Harlem to explore themes such as Black migration from southern to northern cities; lynching and violence in the Jim Crow south; the cycle of poverty engendered by the exploitation of Blacks in the sharecropping system; the rape and abuse of Black girls and women; the discriminatory treatment of Black soldiers who served in WWI; passing; colorism; white privilege; the Great Depression; and the Harlem that was both home to families living in overcrowded and dilapidated tenements and a mecca for public intellectuals, writers, musicians, and artists who were part of the Harlem Renaissance.

A Death in Harlem provides a counternarrative to Nella Larsen’s 1929 novel Passing, the story of Clare Kendry and Irene Redfield, two mixed-race women who are childhood friends who reconnect during the Harlem Renaissance. Clare Kendry, who is passing as white, is married to a man who does not know she is Black, while Irene Redfield is married to a Black man. At the end of Passing, Clare mysteriously falls out of the window, and it is unclear whether this mixed-race woman jumped or was pushed. Using this story as an origin, Holloway creates a more complex story in her novel A Death in Harlem. Irene Redfield emerges as Vera Wright Scott, and Clare Kendry emerges as Olivia Frelon, the woman at the center of this tragic death.
Gone Missing recounts the narrative of the Mosby family, who migrates from the south to Harlem after being subjected to possible lynching and violence. When Iredell, the father, dies from influenza and their son, Percy (aka June Bug), becomes tangentially involved in the mob culture, Lilah sends him back south for safety. She then is faced with the rape of her daughter Selma and the disappearance of Selma’s daughter, Chloe, a mixed-race baby, who is abducted while her mother is in Chasen’s, a neighborhood grocery store. This abduction is juxtaposed with the kidnapping and subsequent murder of the son of the legendary aviator Charles Lindberg.

Officer Weldon Haynie Thomas links both novels. In A Death in Harlem, Holloway introduces Thomas as the first “colored” policeman in Harlem who makes it a priority to solve the mystery of the suspicious death of Olivia. Officer Weldon Thomas, a more mature man, re-emerges in Gone Missing. He has been promoted to detective and is faced with solving the mystery of Chloe. Once again, Thomas makes solving the abduction of Chloe a priority.

A well-read man, Weldon understands his special responsibility. Holloway foreshadows how Thomas approaches life by referencing a quote from W.E.B. DuBois’s The Souls of Black Folk. Thomas has just read the lines from DuBois when he is made aware of the death of Olivia. The lines resonate with him and underscore the duality of his responsibility as a police officer and as a Black man in America.

It is a peculiar sensation. . . . this sense of always looking at one’s self through the eyes of others. . . One feels his two-ness, . . . two souls, two thoughts, two unreconciled strivings; two warring ideals in one dark body.
In both novels, Black and White public responses to the murder of a mixed-race woman and the abduction of a mixed-race baby differ. When announcing the woman’s death in Harlem to white attendees at the Mayor’s holiday party, the Police Commissioner states that his office has become aware of the death. He states:
At first glance, it seemed to be one of our own . . . a woman of considerable means. . . . Instead, it seems one of these colored girls who seemed to be . . . what do they call it when they look like us but are truly of the Negro persuasion?. . Seems she was a real looker. . . . The men standing nearest him laughed.”

Officer Weldon recounts how he is forced to rush the case, although the police officers in his precinct fail to read his comprehensive report. On the other hand, the Black literati engage in rumor, gossip, and innuendos about the lifestyle and origins of Olivia.

In Gone Missing, the kidnapping of the son of Charles Lindberg, the young aviator, draws attention from the general public, elected officials, and the world. At the same time, the abduction of Chloe is barely covered. A Black woman exclaims, “Y’all brought out the National Guard when it was Lindbergh’s baby. Weapons and everything at the ready. Like WW all over again. And all you got up in the store is two police with billy clubs? That ain’t right.”
Officer Thomas, however, will not be deterred by messaging from the white establishment that the mystery of the death of Olivia and the abduction of Chloe will not be solved. As a child, an old woman who lives in the apartment of the mother of Officer Weldon tells her that he is a special and sensitive child . . .:
The kind of boy where knowing there’s something he don’t know will bother him mightily unless you find him something to do that can sidestep this thing. . . . You gonna to have to give him thinks to know about. . . Not long afterwards, his mother took to bringing him to the Harlem Branch Library on 135th.
This maxim affirms Officer Weldon as a man who has premonitions and senses that something is awry with the death of Olivia in A Death in Harlem and the disappearance of Chloe in Gone Missing.

Both novels’ social and political consequences of passing and living as “mixed-raced” individuals are overriding themes. As Vera and Olivia, major protagonists in A Death in Harlem, sit while having tea in the rooftop gardens at the Astor, a restaurant that excludes Blacks, they reflect on their ability to pass and what that means for the race. Oliva states: “On these lovely occasions, we get to glimpse what it would be like to experience this freedom, this liberation into finer worlds. . . .Vera responds, “Wait. Wait. Exactly what kind of freedom is this for that you long for? Isn’t our work for the race important to you? Are not our access and our membership a privilege as well as a responsibility?”

Holloway’s strong, vivid images and themes engage the reader and present authentic portraits of the Black literati and the conflicts faced by Blacks living on the edge of poverty in Harlem, circa:1920s. The mysterious death of Olivia in A Death in Harlem occurs at the Ninth Annual Opportunity Awards Writing Contest held at the landmark Theresa Hotel. Dr. Charles Spurgeon Johnson Jr. is the “humble master of these august and splendiferous ceremonies.” Holloway illustrates his use of hyperbole in speaking to the guests:
So you will, of course, dear friends and guests, understand and appreciate the destination of my request to you. If I might take this intimate license, you are undoubtedly the most extraordinary and resplendently attired audience that has the fortune to gather for this “gilded” opportunity.

In describing the day that June Bug, the son of Selma, the protagonist in Gone Missing, finds himself in trouble, Holloway paints a picture of the dark surrounding an unoccupied building: “If you looked back over your shoulder just before you entered the unoccupied building, you could see he phosphorescent wake from the Harlem River churn a luminous watery bilge from a passing barge.”

Holloway’s description of the grief that Lilah, Selma’s mother, experiences provides a lens for understanding why Selma cannot grieve for her daughter, who has been abused. Selma is consumed with her own grief over the loss of her husband, Iredell.
Instead of soldiering on . . . she spent her days waiting for the next loss, for the absence that would crush and how whichever would be the one to come, it would be the one to extinguish. It was certainly a contradiction. Nurturing, caring for, and embracing her precious daughter could have helped her pass that result.

Holloway also interweaves maxims rooted in Black culture throughout the novel. The role of the ancestor appears in Gone Missing when Lilah, the protagonist, makes up her mind to act after reflecting on the life that her granddaughter Chloe has in Harlem vs. the life she would have had if she had been born in the south, Lilah remembers what her mother always told her: “Sleeping is best for making up your mind. . . . That’s when the ancestors will come and tell you what you need to do.”

Karla FC Holloway, the James B. Duke Professor Emerita of English and Law at Duke University in the Department of African American literary and Cultural Studies, has written in the areas of African American cultural studies, biocultural studies, gender, ethics, and law. She brings her scholarship in these areas to create two mysteries that illustrate how race, class, family, and history shape Black life in America and how Blacks remain hopeful and resilient amid despair. Although written from the perspective of Harlem in the 1920s, these narratives mirror the reality of many Blacks throughout America today.