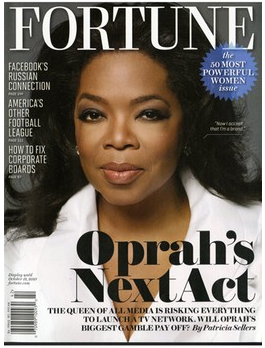 Does Oprah Winfrey, still the first lady of American media, have higher ambitions like becoming the most powerful figure in the free world, the American Commander in Chief, the American Presidency.   It began with the Golden Globes Show and its Cecil B. de Mille Award acceptance speech, warning the audience that the time was now for women to stop being silent about harassment and gender inequality. She reminded the audience that the male dominance/harassment was not restricted to the world of entertainment.   She shared the story of a Black woman named Recy Taylor who was raped by six white men in Jim Crow Alabama in the 40s, who recently died, a few days shy of her 98th birthday.   In conclusion, Winfrey enthused: “A new day is on the horizon when women will no longer need MeToo. Thunderous applause followed her speech.   The Medium is the Message. No one does TV better than Oprah!

Now Americans are pondering an Oprah presidential run. Can it happen? Why not.

Oprah’s partner Stedman says that it could happen. Oprah’s best friend Gayle says no way. If Donald can get into the White House, why can’t a “real billionaire” follow suit. Is Oprah the woman whom America needs in the White House?

Oprah 2020 media speculation has displaced the nonstop news cycle re: about the runaway nonfiction best-seller “THE FIRE AND THE FURY: Inside the Trump White House”. Who would have thought that the Trump Presidency could usher in the next African-American President.

BTW, FIRE AND FURY is a book industry phenom. No book publisher has ever experienced this sales volume. While many have ordered and have to wait a few weeks for delivery, the digital version is being widely circulated.

Liberian-born entrepreneur Richelieu Dennis buys Essence Communications, the magazine and the Essence Festival, held annually in New Orleans, from Time Inc. Sales details were not disclosed. Dennis is the founder of Shea Moisture, who has a talent for preserving Black businesses, including a Harlem-based arts institution. Read the follow-up next week.

HARLEM: The Harlem Business Alliance and the WK Kellogg Foundation are ready to launch the fourth phase of The LILLIAN PROJECT, a program which promotes entrepreneurship for native-born, low- to moderate-income Harlem women by teaching skills necessary to start and grow a business. Formerly incarcerated women are encouraged to apply. The project is named after Harlem denizen, legend and businesswoman Lillian Harris Dean, aka Pig Foot Mary. Deadline for application is January 12. [Visit thelillianproject.org or hbany.org]

BROOKLYN: MY BASE offers paid internships, which begin on March 6 to Bed-Stuy-based young adults. Registration is open until February 23. Internships span many fields like child care, maintenance, retail, office management, hospitality, food industry, marketing and social media.   Priority will be given to Bed-Stuy young adults for ages 16 to 24.   For more info, contact 718.636.7596, X223. [Visit website: bsdcorp.org]

It is never too late to order 2018 Black-themed calendars from the Black Art Depot. Calendars are available for children, the faith-based community, bathing suit beauties and much more.   [Visit Blackartdepot.com or call 800.525.7249]

Harriet Lee Elam-Thomas with Jim Robison co-wrote her memoir “DIVERSIFYING DIPLOMACY: My Journal from Roxbury to Dakar”, published by Potomac Books, an imprint of the University of Nebraska Press, which falls under political science and women’s studies sections in book stores. Book chronicles her decades-long ascension up the US State Department’s Foreign Service, becoming US Ambassador to Senegal.   Her 42-year foreign service assignments were to countries such as Greece, Turkey, France, Belgium, Mali, and the Ivory Coast. A force of nature in the US State Department, she was an agent of change, influential in bringing diversity to the department’s foreign service. Retired from the US State Department as of 2005 with the rank of Career Minister, she directs the University of Florida Diplomacy Program.

“ALICE AND ME”, Historical Fiction, written by Cynthia T. Cook, African-American Professor of Sociology, opens the book with a disclaimer stating that it’s written solely for entertainment purposes. She continues. Most of the characters are fictional with the exception of Alice Lenshina, who was a real person who started a religious movement in Zambia in the 1950s, which had great potential but ended tragically. ALICE AND ME is an informative and eminently readable novel which lends insights into some of the social issues confronting contemporary Africa.

Darryl Lacy’s new book, “HOW I CONQUERED NEW YORK: The Story of Darryl Lacy Productions”, commemorates the company’s 30th Anniversary. The book is a theater/literature confection. Born and bred in Buffalo, NY, Lacy has degrees in Theater and Fine Arts. Book is good reading for every artist in pursuit of his/her muse. Lacy’s first book, “Nikki G: A Portrait of Nikki Giovanni in Her Own Words”, was published in 2012 and won the 2013 NAACP Image Award for Outstanding Literary Work.   A HOW I CONQUERED NY book-signing will be held on January 28 from 3-5 pm at the Joseph Kennedy Center, 34 West 134th Street with entrance on West 135th Street. [Visit Darryllacyproductions.com]

New Exhibit, KING IN NEW YORK, opens on January 13th at Museum of the City of NY, located at 1120 Fifth Avenue on 103rd Street, along Museum Mile, and runs through June 1. The photo exhibit of KING IN NEW YORK commemorates the 50th Anniversary of Dr. King’s death with a photo exhibit in NYC during the 50s and 60s. Exhibit runs through June 1. There is an admission fee.

A Harlem-based management consultant, Victoria is reachable at Victoria.horsford @gmail.com.