13% of Black Males Voted for Trump in 2016
Advertisement 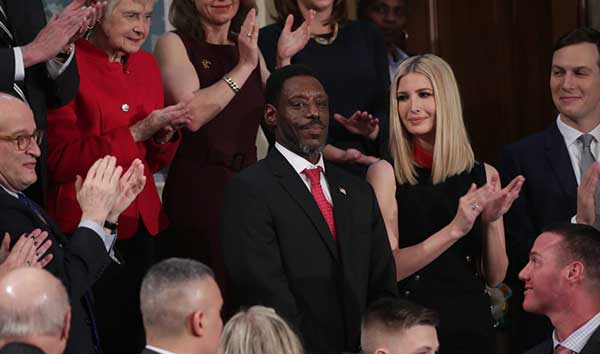 It’s a short hip hop from the misogyny, materialism and alpha male worship of too much rap music to the 13 percent of Black men who voted for Donald Trump in the last election.
The posturing, the bravado, the flaunting of supposed wealth, Trump was the embodiment of that rap ethic and highly praised as an example for the not-rich and powerless to see as a point of aspiration.
In 1989 when Donald Trump placed a full page ad in the New York Times calling for the death penalty for the Central Park 5, the admiration did not stop from those who wanted to be like The Donald. XXL Magazine reported that a CNN piece in 2017, “found that between 1989 and 2016, Trump was mentioned at least 318 times in rap lyrics. Between 2015 and 2016, 83 songs have mentioned Trump; most of the mentions have been negative.”
He was showing in 1989 who he was, but blinded by the flash, the rap artists did not heed Maya Angelou’s admonition, “When someone shows you who they are, believe them the first time.” They did not see him until Trump began to make his political views ever more apparent, proving that even a head as hard as mine can be made to see newly, and rap artists have changed their lyrics, if not their tune. XXL reported that “Throughout the 2016 presidential election, hip-hop has been in almost total accord when it comes to Donald Trump… …the xenophobic rhetoric that got him elected didn’t sit well with Black artists on the whole, and everyone from T.I. to Eminem spoke out against the orange one.”

If art can point the way toward the future, then that 13% of Black men who voted for him 4 years ago, hopefully all of that will not be there for him this time around.

What if he won’t go?
I see folks very worried about what if President Trump loses and refuses to leave office. What do we do then? I used to worry about this also, but I’ve decided to stop. We ignore him and his inevitable tantrum and his attorney general trying to invoke some point of law. The 20th Amendment to the Constitution is very clear on this point. Ratified in 1933, Section 1 of the Amendment sets the date of the administration transition as January 20th:
“The terms of the President and the Vice President shall end at noon on the 20th day of January, and the terms of Senators and Representatives at noon on the 3d day of January, of the years in which such terms would have ended if this article had not been ratified; and the terms of their successors shall then begin.”
It may come to this: At the hour the oath is taken, a congressional delegation composed of the newly-elected senators and House members, along with federal marshals will arrive at 1600 Pennsylvania Avenue, and explain the real world to Donald Trump. The Secret Service will begin treating him as a former president and will help he, Melania and Barron, gather up their things and escort them to the waiting helicopter. The rest of their furnishings and belongings will get packed in the afternoon and shipped by truck.
Biden and Harris will hop into The Beast, the presidential limousine, and into the driveway of their new workplace. While the living quarters re being cleaned out, they’ll be in the Oval Office, peopling their administration implementing the actions they were consumed with after election night. Anyway, that’s the dream. Send money and vote early.
Beware the Provocateurs
Jacob Blake, a 29-year-old Black father of six, was shot by police seven times in the back at close range as he was getting in his car in front of three of his children sitting in the back seat in Kinosha, Wisconsin on Sunday.
If he survives his immediate wounds, which may include severe trauma to his spinal column, he has a lifetime of paralysis below the waist and a sudden change of what he thought his life was going to be.
His three children will carry this moment with them for the rest of their lives, and the burden of it will be the trauma that weighs on them and shapes them differently than what they were going to be.
It is a horrible thing made more so by the agent provocateurs who will use this moment to bring violence to peaceful protests, so that the peacemakers take the blame. Beware of them. And beware of Russian bots carrying violent moments on your various feeds. These are dangerous, dangerous times.

The View from Here: America’s Legacy of Racism