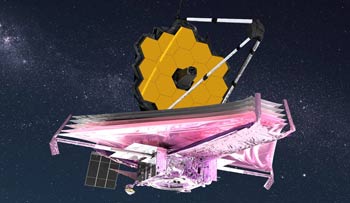 Robin McKie,
www.theguardian.com
The most ambitious, costly robot probe ever built, the $10bn James Webb telescope, has been blasted into space on top of a giant European rocket.

Engineers reported on Saturday that the observatory – which has been plagued by decades of delays and huge cost overruns – was operating perfectly after going through the most nervously watched lift-off in the history of uncrewed space exploration.

Described as a “time machine” by scientists, the telescope will allow astronomers to study the beginning of the universe shortly after the big bang, 13.8 billion years ago, and to hunt for signs of life-supporting planets in our own galaxy.

“We have delivered a Christmas gift to humanity,” said the European Space Agency’s director general, Josef Aschbacher. “With this telescope we are enabling new science. This was a special moment, nerve-racking but successful in the end.” This point was backed by Nasa’s administrator, Bill Nelson. “It’s going to give us a better understanding of our universe and our place in it: who we are, what we are, the search that’s eternal.”

The James Webb telescope began its journey into space at exactly 12.20 GMT when the solid fuel boosters of its huge Ariane 5 launcher were ignited. On top of a fiery plume of thick smoke, the rocket rose above the tropical rainforest that surrounds the Esa centre in Kourou, French Guiana, and within a minute had disappeared into the thick clouds overhead.

After 27 minutes of powered flight, the telescope separated from its launcher’s upper stage and was placed precisely into its planned trajectory. The manoeuvre was greeted with tumultuous applause from flight controllers in Kourou. Jubilant scientists – some wearing Santa hats – hugged each other and held up signs that read “Bon Voyage Webb”.
Once in orbit, the telescope’s solar arrays were unfurled and the observatory began its million-mile voyage to its final destination, a region of deep space where it can be kept stationary in roughly the same position in the sky. Cameras on the rocket’s upper stage provided one last glimpse of the shimmering telescope before it sped into deep space.

Designed as a replacement for the Hubble space telescope – still in operation after its 1990 launch – the James Webb telescope is a far bigger and much more complex instrument with many more ambitious goals. For a start, it will not study the visible part of the electromagnetic spectrum – as does the Hubble and most ground-based telescopes – but only infra-red radiation. As a result, it has had to be fitted with complex shielding and cooling equipment to hide its instruments from solar radiation that would otherwise trigger spurious signals.

The James Webb – named after a former Nasa administrator – will spend a month on its journey and will then need a further five months to get ready. First, its enormous gold-plated 6.5 metre mirror and its huge, tennis-court-sized sunshield need to unfurl; they were folded origami-style to fit into the nose cone of the Ariane 5. Then its instruments will have to be carefully calibrated. In all, hundreds of release mechanisms need to work perfectly in order for the telescope to succeed. “Like nothing we’ve done before,” said Nasa programme director Greg Robinson.

The observatory – built by Nasa with European and Canadian collaboration – has been designed to revolutionize our study of the universe. Among the hopes of astronomers is the prospect of imaging the first galaxies to form after the Big Bang, understanding how stars are born and evolve, and investigating the potential for life to appear in planetary systems. All this will have to be done in a decade, the maximum likely lifetime of the James Webb. After 10 years, it is expected that it will run out of fuel and slowly drift off course – to become the most expensive piece of space junk ever built.

But for now, scientists are eager to begin work on the observatory. “For the thousands of astronomers across the world, we must now be patient for many weeks,” said Durham University’s Professor Martin Ward, who has worked on one of the main instruments on board. “One can say that this is just the end of the beginning … The best is yet to come, we hope, over the next 10 years, including discoveries that we have not even imagined. Watch this space.”