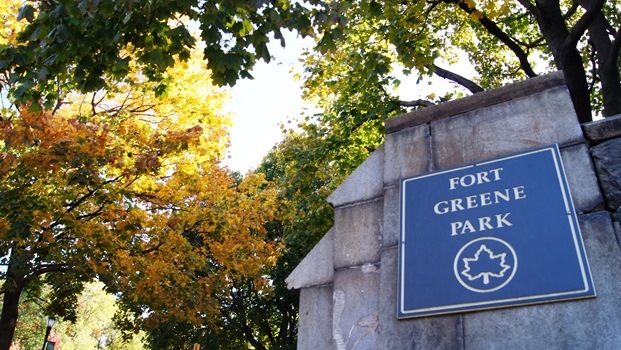 I was working out on the Myrtle Avenue side of Fort Greene Park the other morning. It was early, around 8am. After I finished up, I decided to walk through the park to the DeKalb side to grab some coffee. At the top of the stairs, on the other side of the monument, what I found was unnerving. The entire park was being used as a dog park. Like, literally the entire inside of the park was being used as a dog park, with dogs running freely and without leashes all over the place. It’s been this way for maybe the last three, four years, but honestly, this is the first time that I found myself up close and personal with it. As I made my way deeper into the park, and ultimately to the other side on DeKalb Avenue, dog owners gawked and stared at me because I wasn’t a dog owner. I didn’t have a dog, so their look questioned why I was even in their park.

Allow me the opportunity to explain what Fort Greene Park means to the County of Kings. Formerly known as Washington Park, Fort Greene Park is the FIRST designated park in Brooklyn. The first park. In Brooklyn. It was originally the site of forts that were built for the Revolutionary War, and then later again for the War of 1812. The Prison Ship Martyrs Monument that sits at the top of the stairs is a memorial of 11,500 American Prisoners of War that resides on prison ships in the Brooklyn Navy Yard. Some of those prisoners are interred underneath the monument. So, in the area of American History, Fort Greene is a special place.

Culturally, Fort Greene Park has always been a crossroads park. Brownstones at one end and projects at the other. Iconic Brooklyn Technical High School across the street and the first hospital in Brooklyn as a next-door neighbor. Fort Greene Park hasn’t just served the Fort Greene community, it has served the entire city. Cross-country training, soccer matches, touch football, tennis, concerts, orchestras, picnics, film shoots, farmers’ markets, the park has always been a place to intersect with the culture of Brooklyn. It has been the centerpiece of Brooklyn movies for decades, featured in films like The Miseducation of Sonny Carson, Brown Sugar and She’s Gotta Have It. Culturally, Fort Greene is a special place.

In 1992, me and my high school crew took our yearbook pic on the stairs in the park. In 1995, I had a 20th Birthday BBQ in the park, over 150 people came. That was the same year as Spike Lee’s first Block Party along the park on the DeKalb Avenue side. I can remember walking into the park and seeing hundreds of brothers from the Nation of Gods and Earths convening or walking through as dozens of Black and Brown brothers played soccer. I can remember one summer laying in the park listening to Ben E. King singing Save The Last Dance for Me live. I remember when the Williams Sisters visited the tennis courts. I remember when my friend Peter Tulloch organized the Fort Greene Festival, arguably the greatest festival to ever come to Fort Greene Park. A festival, by the way, that bought an estimated $1.5 million in economic impact to the neighborhood during its three-year run. This park has been the hub of “Brooklyn Boheme,” the backdrop of the evolution of Brooklyn, from Decepts robbing students in the park to house heads coming by the hundreds to Soul Summit, to Common and Mos Def igniting the crowd, to becoming a drop-off center for donating Christmas trees for composting after the holidays. In its heyday, the entire community used the park. All of us.

But now, it seems as if the park has gone to the dogs.

Community Board pressure, the whims of uptight new residents, back-door dealings and who knows what else is responsible for Fort Greene Park losing its identity. Whatever the reason, I almost didn’t recognize it the other day. It’s fine if many of our newer residents want to use the park as a place for their dogs to play, but it’s disrespectful to the legacy of Fort Greene Park that it should be shut out from all of the soul and life that has embodied the park over decades just because the same neighbors letting Fido run wild in the park at 8am would rather you and I not use the park at 8pm.