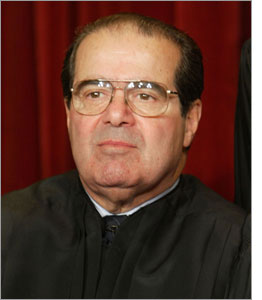 Blacks, Latinos, and poor whites suffered because of his draconian approach to criminal punishment.

In the days since Antonin Scalia’s death, he has been duly recognized as one of the most impactful justices in the Supreme Court’s history. A critical part of his troubling legacy has long been staring us in the face, although it finally started receiving the public scrutiny it deserves in recent years. As draconian punishments became the norm over the last three decades, the Supreme Court largely rubber-stamped these practices. Justice Scalia played a key role in this process, as his hardline stances on criminal punishment significantly contributed to mass incarceration, numerous executions, and systemic racial discrimination. Scalia was an outspoken supporter of harsh punishments and wanted the court to take an even more hands-off attitude toward so-called “tough on crime” laws.  (Read More)