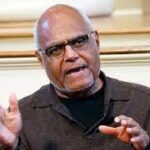 By Fern Gillespie
On the eve of Donald Trump’s January 20, 2017 inauguration, veteran journalist and Brooklyn realtor Audrey Edwards landed in Paris. Her “blaxit” was the beginning of her journey as a Black American expatriate in Paris. It is legacy that includes cultural heroes like Josephine Baker, Richard Wright, Chester Himes, Langston Hughes, James Baldwin and Nina Simone.

In her lively memoir, American Runaway: Black and Free in Paris in the Trump Years, Edwards explores her life as a Black American woman expatriate living in Paris during America’s turbulent Trump years. Through essays, articles and interviews, the award-winning former Essence editor takes readers through the adventures and insights of her and fellow Black American expats as they navigate life in Paris. She ventures through famous French cafes, elegant soirees, political marches, interracial relationships, compassionate healthcare and the history between the French and Black Americans.

“Black Americans living in Paris seem to have a more militant view of politics back in the States than the Blacks living the States. I think this is because the view from afar comes through sharper and clearer because being away gives a broader perspective,” Edwards observed. “Also, people living outside of their native country tend to have a more intense focus on their native land—always wanting to know what’s going on. Blacks in Paris are very aware of being Black wherever they are in the world and continue to be engaged in the politics of Blacks back home.”

Since the 1970s, Edwards has been recognized as a leading journalist covering the intersection of race and gender. She is a former Executive Editor for Essence, former Executive Editor and Vice President of Editorial Operations for Black Enterprise, and Senior Editor for both Family Circle and More magazines. Edwards holds a bachelor’s degree from the University of Washington and a masters from Columbia University.

In 1992, Edwards co-wrote Children of the Dream: The Psychology of Black Success, with Dr. Craig Polite. She collaborated with Edward Lewis, co-founder, CEO and publisher of Essence magazine, in 2014 on his business memoir The Man From Essence: Creating a Magazine for Black Women. HBO Max will be releasing post-civil rights era drama series in 2022 based on the book about the men and women who created Essence.

Real estate is Edwards’ other career. After running her successful real estate firm in Brooklyn for 23 years, in 2008, she joined Brown Harris Stevens as an associate realtor. As a broker and a real estate investor, she’s facilitated sales, purchases, and rentals for clients in New York City, the Hamptons, upstate New York, and Atlanta, Georgia. She has sold homes and apartments in Brooklyn’s Park Slope, Prospect Heights, Clinton Hill, Fort Greene and Bedford-Stuyvesant neighborhoods. It also gave her the skills to negotiate her Paris apartment.

“Although Trump lost the election, his presidency unleashed the forces of racism and white supremacy not seen to this extent since the 1950s,” she points out. “Those forces aren’t going away just because Trump is out of office, which to me makes America still untenable.”

Although COVID stranded Edwards in the U.S. since early 2020 (she’s returning to Paris in the fall, her friend and former Essence colleague Karen Thomas has happily remained in Paris. For over 20 years, Thomas headed marketing at Essence, where she created and produced the Emmy Award winning Essence Awards, the Essence television show and the extraordinary Essence Music Festival. Thomas, who holds a doctorate in education from Kean College (also a degree in marketing from NYU and communications from Simmons College), founded the Marion P. Thomas Charter School in her Newark hometown. Thomas’ Blaxit adventure is studying art history in Paris.

OTP: When did you decide to move to Paris and why?
KT: I probably really began to love Paris when I was eight and taking French in elementary school and met my first French person who was my teacher, Madam Truhertz. I celebrated the turn of the century in Paris in 1999, and after retiring in 2018 sold my home, gave everything in it away and headed to France.  I never think of it as why, but why not? I have traveled to almost every continent and 48 of the 50 states. Paris is the most exciting place I have ever been and now lived.

OTP: You attend the American University of Paris. What was your experience as an American living and working in France during COVID?
KT: I actually am a student at the American University of Paris. To steal a line from Nell Painter, I am old in art school. Paris and Europe have been amazing places to study art history.  Being able to see the original works and sit before them and appreciate their size, texture, story, history and beauty is learning at its pinnacle.  The covid shut down of the museums and online classes brought that experience to a screeching halt and changed the dynamic completely and not in a good way.  I paused my studies as a result because it wasn’t the same experience

OTP: You were living in Paris during the Trump administration, what was that like observing the US from a far?
KT: It was painful to be American oversees for the first time.  I never thought I would ever be pitied because I was American.  People around the world were feeling sorry for the decline of the United States.  It was an embarrassment.

OTP: For over 20 years you headed marketing at Essence Magazine and was instrumental in the development of the Essence Awards TV show and the essence festival. You specialized in experiences for black women. What is it like being a black American woman living in Paris?
KT: I have bonded with an amazing circle of Black women who are living in or connected to Paris.  They run the gamut from diplomats, to artists, journalists, educators, to those engaged in social action.  The support during the Covid-19 lockdowns was amazing between the community of Black women here in Paris and those trying to get back here.  I became part of creating an organization called Sisters4Sisters Paris.  We support young Black women studying abroad here in Paris.  This year we established the Josephine Baker Excellence in Service Award.   The  inaugural recipient was a  senior at The American University of Paris, (AUP), A’mari Bing-Way who had established the Black and Abroad Club to create a safe space and bring together Black students at AUP. As a high school student in the A Better Chance program she played a similar leadership role.

OTP: What are the favorite things you like to do in Paris?
KT: I have been here studying art history and love going to museums and galleries and just wandering the streets of Paris and seeing new things everyday.  I love the Commerce de Bourse Museum that just opened after the curfew was lifted in Paris.  African American artists, Kerry James Marshall and David Hammons are featured within the permanent collection. Both the collection and building are works of art.  Other perks of Paris are drinking great champagne and red wine from Bordeaux with friends. Ohhh la-la.