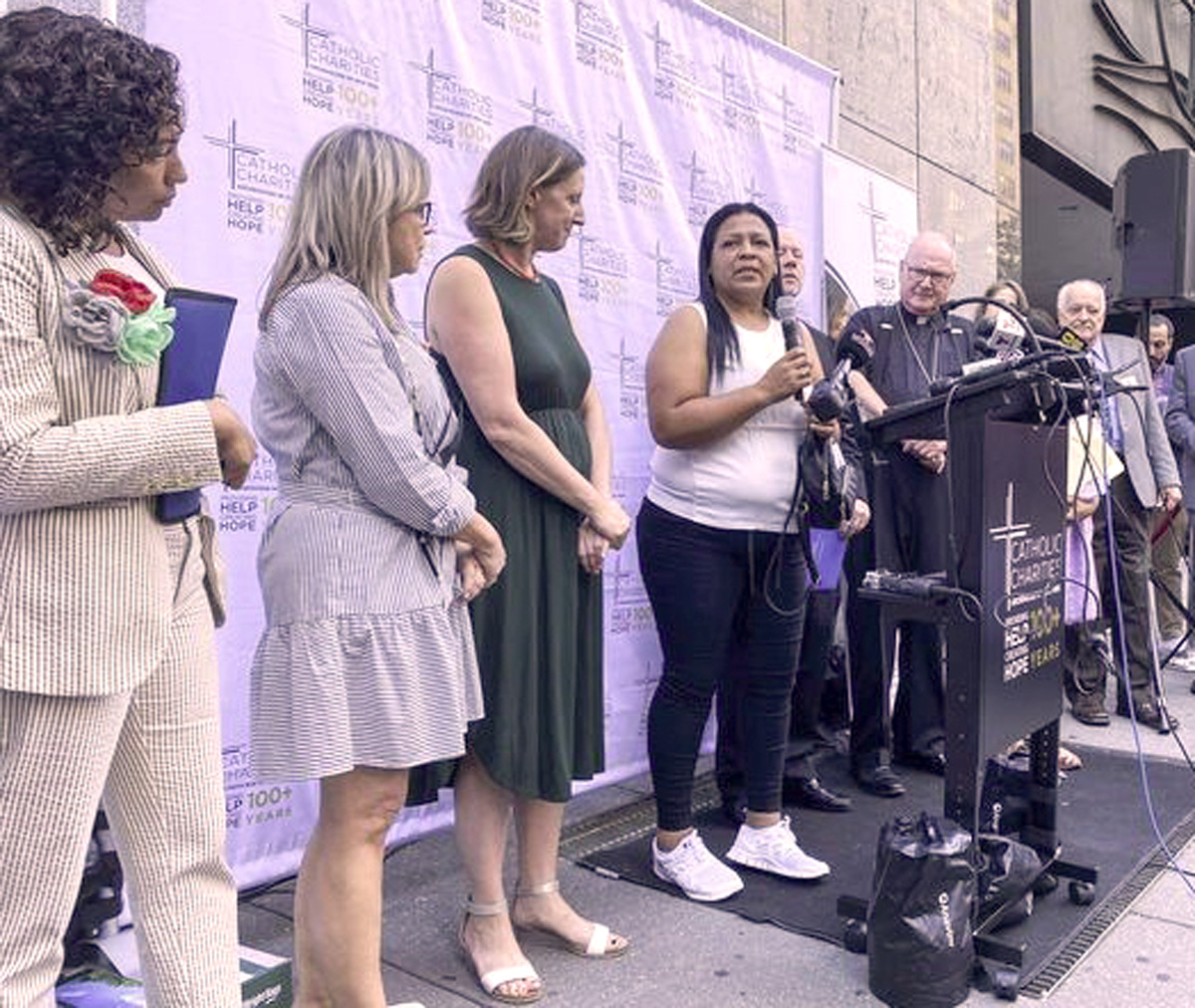 Jennifer, a 44-year-old asylum seeker from Venezuela, speaks at a press conference held outside of Catholic Charities of the Archdiocese of New York. Arun Venugopal/Gothamist

BY ARUN VENUGOPAL
The Gothamist
As Texas Gov. Greg Abbott continues to send busloads of migrants to New York, he may unintentionally be giving them a better chance of obtaining asylum.
The newly-arrived migrants are far more likely to have their asylum cases approved in New York City Courts than they would be in places like Houston, Dallas and San Antonio, said Austin Kocher, an assistant professor at Syracuse University’s Transactional Records Access Clearinghouse (TRAC), which analyzes federal government data.

And in a liberal city like New York, migrants have more access to government resources and benefits that they would otherwise be shut out of in red states with more hardline policies around immigration — such as government-issued identification cards, housing, driver’s licenses and health care. On Friday, the city Department of Education said it is prepared to enroll roughly 1,000 children into the public school system.

“Texas Governor Abbott is sending immigrants to New York as part of a cynical anti-immigrant political stunt,” said Theo Oshiro, co-executive director of the immigration advocacy group Make the Road New York. “As New Yorkers, we will not be deterred from providing a welcoming home here.”

Tensions between Abbott and Mayor Eric Adams erupted earlier this month when the Republican governor announced he was sending buses full of refugees to the Port Authority Bus Terminal to protest the White House’s southern border policies, a move the mayor said is adding further strain to an ailing shelter system already struggling to keep pace.
But carting asylum seekers to New York and other left-leaning cities may have the opposite effect that immigration hardliners intended, Kocher noted.
“Abbott is actually sending asylum seekers to a court where they’re much more likely to be successful and much more likely to stay in the country,” he said.

An Unintentional Silver Lining
In Houston, just 17% of asylum cases were approved by judges in the last 10 months, Kocher noted. Prospects were only slightly better in Dallas, with 33% of cases getting the green light.
But in New York City, immigration judges approve people for asylum at a much higher rate, granting asylum to four out of every five applicants, or 82%, data shows.
It’s a slight silver lining to the harrowing journey many immigrants face as they depart their home countries to traverse through jungles and deserts on a months-long trek where scores of people die to arrive at the southern border in hopes of seeking refuge in the U.S.
To endure the trauma of the voyage, you need to have a “corazón de piedra,” a heart of stone, said Jennifer, a 44-year old Venezuelan who arrived at the Texas-Mexico border in July after a two-month journey through Central America with her partner.

Jennifer, who did not want to disclose her full name because of her immigration status, wasn’t aware that she would be stepping into a heated political debate when she entered the U.S. The bus ride from Texas to New York was unremarkable considering what she’d experienced in the last two months.

“The hardest part was parents saying their goodbyes to their children because they died in their arms. Seeing handicapped people who were missing legs trying to make the ascent. Parents with three or four children in tow, some sleeping others, exhausted,” she said.
In Venezuela, the ongoing financial crisis has decimated the country’s economy causing a mass exodus of 6 million people, mostly to neighboring countries in South America. Her family was “deteriorating,” Jennifer told Gothamist in her native Spanish and the cost of the voyage has left her and her partner with “major debt” back home.

A Strained System
Jennifer was one of 1,500 newly-arrived immigrants who have arrived at Catholic Charities of New York offices in Manhattan in recent months, an influx that took city officials by surprise.
Hundreds of asylum seekers were told by federal officials to proceed to the organization’s Midtown office after crossing the border in Texas, but officials at Catholic Charities said in many cases the authorities didn’t let them know beforehand.
The unexpected arrival of hundreds of asylum seekers from Texas has “strained” the organization, said Monsignor Kevin Sullivan, the executive director of Catholic Charities of the Archdiocese of New York.

The Mayor’s Office of Immigrant Affairs estimates that 550 asylum seekers arrived in the city so far this month from Texas, putting the total number of new arrivals from border states at about 6,000.
The Adams administration is requesting assistance from the federal government to handle the surge of new arrivals. Earlier this week, city officials announced that they were looking to award $6.75 million in emergency contracts to nonprofits to do everything from providing food and clothing, to health care and child services.

Bienvenido to New York
While it’s not an ideal situation for new arrivals like Jennifer, settling in New York is a better alternative than in some southern cities where anti-immigrant sentiments flourish and public assistance is scarce, immigration advocates say.
New York is one of just 16 states where immigrants can apply for driver’s licenses and in the five boroughs, they can obtain free government-issued identification cards and access low-or no-cost health care through the city’s public hospitals.

Local law obligates the city to provide housing, ensuring anyone in need of a bed has one available, which is critical for many arriving without a family or place to stay.
The public services touted by city officials became a target for Abbott, who justified sending asylum seekers to New York to “receive the services Mayor Adams has boasted about.”
But it’s not just government services in New York that provide a softer landing after a brutal voyage.

Asylum seekers are also “much more likely” to find legal assistance and public defenders here than in Houston, said Camille Mackler, executive director of the Immigrant Advocates Response Collaborative, which could significantly tip the scales in their favor in court.
And a culture of acceptance toward immigrants may also help ease the transition, advocates say, especially after being stripped of almost every belonging by immigration officials at the border.

“I came with more sentimental things that I thought I could get through — photos of my children,” said Jennifer. “A telephone and passport were the only things that were permitted.”
Now awaiting arrivals at the Port Authority Bus Terminal, a place most New Yorkers attempt to avoid, are tables set up by local non-profits with socks and shoes, and volunteers to help asylum seekers navigate the city’s complex shelter system.
“When they disembark from the bus, we have people standing there, waving, saying ‘Bienvenidos!’ and applauding their arrival and handing little children teddy bears and bubbles,” said Ilze Thielmann, the director of Team TLC, a volunteer group showing up at the Port Authority in the early mornings.