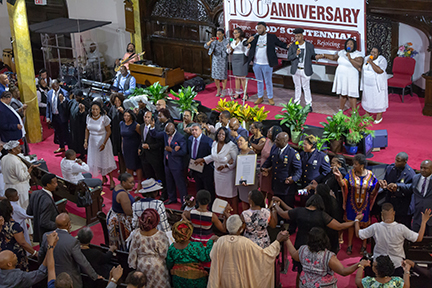 Antioch Baptist Church (ABC), founded by Reverend Moses Prophet Paylor in 1918,  has been an anchor for the black community for a century.  Crossing its threshold have walked luminaries of Civil Rights history: The Reverend Dr. Martin Luther King, Jr., The Reverend Ralph Abernathy, Congressman Adam Clayton Powel, Jr.; Julian Bond, Rosa Parks and Congresswoman Shirley Chisolm (first African-American and woman nominated for U.S. president) came. Politicians such as New York’s Governor Nelson A. Rockefeller (whose family built The Greene Avenue Baptist Church that became the home of Antioch), and New York City Mayors David Dinkins and John V. Lindsay. Celebrities in many fields, Ossie Davis, Ruby Dee, Dick Gregory, Spike Lee and Langston Hughes came to Bedford Stuyvesant by way of Antioch.  The great athlete Jackie Robinson was funeralized there. Today, greatness still visits the church in the form of a membership whose dimes and dollars continue to grow the programs that grow the community through outreach.  Says the Reverend Dr. Robert M. Waterman, “We are reaching souls inside and outside of the church …”

And certainly, in the world of gospel, Antioch Baptist Church is known for its great songwriters, musicians and vocalists.  Under the guidance of Rev. Waterman, ABC has opened its doors to music that moves the people, incorporating forms that meld the secular with the sacred, bringing the souls on the inside to an understanding of the rhythms of the outside; and the souls outside into a sacred talent-nurturing space.

So, Antioch reminds us that the church is more than about longevity, it is about what we do with the time.  It also reminds us that through our institutions our villages have a chance to be, and remain, strong. Our Time Press, this week, offers a photo montage of the lively, warm banquet event of last Sunday evening where Antioch rocked.  We return next week to recap the morning service where message, memory and music was manifest.

Faith’s wellsprings also revealed the “grave illness” of “the voice of a generation,” Queen Aretha Franklin, 76. We go to press awaiting updates on the health status of the
great music icon, also a visitor in the past, to the great Antioch Baptist Church. Bernice Elizabeth Green