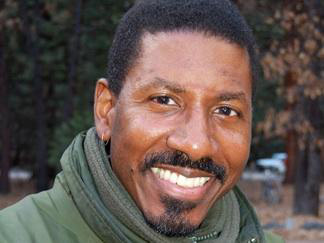 Detroit, Michigan native Shelton Johnson had little experience with the natural world. But he always dreamed of living in the great outdoors. When his father was stationed in the Air Force in Germany, Shelton, at age five, became in awe of the Bavarian Alps, later called Berchtesgarden National Park.

“I had no idea at the time it was going to be the most significant moment in my childhood,” Johnson told Outside magazine.

National Geographic Magazine brought American landscapes to him in these pre-social media times.  He recalled thumbing through the issues and the images of Yellowstone and Yosemite to the Grand Canyon.

The experience of standing on the edge of the Alps with his father, and the words and images “stayed” with him when his family moved to London in 1964,  and when his father was restationed back in Detroit in 1967 — where Johnson stayed through and beyond his college years.

In 1981, Johnson received his B.A. degree in English literature from the University of Michigan. In 1982, he joined the Peace Corps and was sent to Libreria.  He taught seventh-grade English at the Booker Washington Institute, the country’s first agricultural and vocational school. To one writer he recalled how the forests surrounding the village moved him — “green no matter which direction you threw a stone.”

A few months later, a serious bout of dysenary forced him to pack up the memories of Kakata village’s plush emerald landscape,  “birds for which he had no name, singing songs he’d never heard” and “spiders the size of a hand with outstretched fingers” for his return to the U.S.

He started taking graduate courses in poetry at the University of Michigan.  During a break, in 1984, he took a job as a dishwasher at Yellowstone’s Old Faithful Inn inside Yellowstone Park. And the rest is history that eventually brought the parks ranger to recognition from President Barack Obama and Oprah.

Johnson officially began career life as a ranger at Yellowstone in 1987. He wrote poet, teacher, and in so many words, love of nature and African American and Native American history on his application.  It seemed unlikely but he was hired to work in Yellowstone, then other parks and back to Yellowstone.

According to an NPS press release, Johnson also worked on NPS projects in which he shared  “previously untold stories of people of color to America’s national parks.

For his work telling the true stories of the Buffalo Soldiers and their roles as parks rangers as well as stories to Park visitors and his compassionate on-camera commentator-host for Ken Burns’ landmark documentary, “National Parks: America’s Best-Kept Secret,” Johnson received the 28th annual  Freeman Tilden Award, the highest award given by the National Park Service for excellence as national park interpreter.  Burns won two Emmys for the film. NPS also noted that Johnson “facilitated lasting connections” for NPS with Black audiences.”

A few years later, Johnson narrated jouralist James Edward Mills’ 2014 documentary An American Ascent. Mills said of Johnson, “He’s keeping alive a narrative that had widely been forgotten and untold for almost a century. To my knowledge, there’s no one being groomed to take his place. If he goes away, that could stop. And that would be tragic. Shelton is a national treasure.”

“My home is where the mountains are, and that’s why I’m here,” Johnson told a reporter. “What fires the imagination of my spirit are places like this.”  And writing.  Johnson wrote “Gloryland” published by Sierra Club Books in 2009.

The novel traces the life of Elijah Yancy, born on Emancipation day, through his escape from Jim Crow, to his career as a Buffalo Soldier, where he eventually lands in Yosemite, a place where he is allowed to truly find and be himself. The book is a fictional memoir of a black Indian from South Carolina who becomes a Buffalo Soldier assigned to patrol Yosemite in 1903.

Editor’s note: A general lack of racial diversity across the National Park System has been a growing concern as whites head towards minority status in the United States and worries arise over who will be the coming generations’ advocates for national parks. In Gloryland, Shelton Johnson confronts America’s ugly history with racism head-on in a novel he hopes will encourage blacks to find a connection with the country’s wilderness landscapes. It’s a story, however, that can without too much difficulty be applied to other races, and even to different classes in society.

Though thrown (in 2019) into the national spotlight by Ken Burns’ documentary on the national parks for his talents as an interpretative ranger, it was visions of a literary career that powered Ranger Johnson through college.

Indeed, it was a fluke summer job as a dishwasher at Old Faithful Inn in Yellowstone National Park that propelled him into a National Park Service career. And it was that career that sent the African-American off on a search of his cultural, and even familial, history as he sought a connection that could bring more of America’s blacks into the parks, both as visitors and rangers.

But not just any parks. From his experience, Ranger Johnson believes there is a scarcity of blacks in the iconic wilderness parks — the Yellowstones, Yosemites, and Grand Canyons. It’s a vacuum that troubles him, for he believes many of his race have lost their spiritual connection to the landscape. With hopes of renewing that connection, he gives us Gloryland, a novel that follows a sharecropper’s son from Spartanburg, South Carolina, to a career with the U.S. Cavalry of the late 1800s and early 1900s as a Buffalo Soldier.

“By the time I arrived in Yosemite, I was a fairly skilled interpreter and was doing what everyone else was doing: interpreting the geological history of the park, the cultural history of the park and so forth,” Ranger Johnson replies when asked what motivated him to write the book. “I came across this Buffalo Soldier story and I basically realized that that was it. What I mean by that was it, early on I had recognized not only that there was a lack of African-American visitors to the national parks, I recognized that there was a lack of African-Americans serving with the National Park Service in wilderness-type parks.

That Buffalo Soldiers might be the vehicle to bridge that gap came about in 1995 when Ranger Johnson found himself in Yosemite’s research library and saw an archival photo of five black soldiers on horseback. He immediately saw how he, as an interpretive ranger, could entice more blacks into the parks by presenting the history of the Buffalo Soldiers

“I basically was inheriting a history that had been expressed and communicated to the public but for whatever reason did not take root. The story was basically dead. … What I realized was that the story has to live beyond the work, and the energy, and the efforts of the ranger telling the story. The story has to have a lifespan of its own, separate from that. That was with me from the outset,” says Ranger Johnson. “With the outset was the sense that this was a history that was on life-support. How do I bring back the dead? …”

(Kurt Repanshek’s May 19, 2017 review of Gloryland and interview with author Shelton Johnson continues next week, accompanied by an OTP sidebar — “You know the Song, Do you know the History?”– on the Bob Marley classic, “Buffalo Soldier”.)