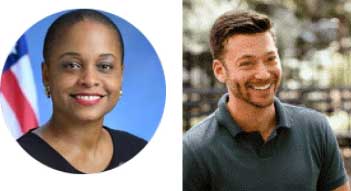 Assemblywoman Tremaine Wright (D-Bedford-Stuyvesant, Northern Brooklyn) and Jason Salomon each picked up solid endorsements this week in their Democratic Primary race to succeed retiring State Sen. Vamanette Montgomery in the 25th Senate district covering Fort Greene, Boerum Hill, Red Hook, Bedford-Stuyvesant, Sunset Park, Gowanus, and Park Slope.
Wright received the endorsement from Eleanor’s Legacy is the largest statewide women’s political organization,
“Every day we are seeing the difference it makes when women lead. In the New York State Assembly, Tremaine has authored legislation to protect homeowners facing default or foreclosure, prohibit discrimination based on natural hairstyles or traits associated with race, protect adult home residents, and allow individuals to earn college credits while incarcerated. Tremaine Wright leaves no one behind when she goes to Albany. We are proud to endorse her and to increase the number of Brooklyn women in the State Senate,” said Brette McSweeney, president of Eleanor’s Legacy.
“I am honored to have the support of Eleanor’s Legacy during this campaign. As the only woman in the race to be the next State Senator in the 25th District, I am dedicated to leading on the issues that matter most to women and their families. As a former small business owner, I am a champion for women to own and live their dreams.  Currently, four of the nine Senators representing Brooklyn are women. The time is now for Brooklyn women to take their seat at the table,” said Wright.
Not to be outdone, Salmon nabbed the endorsement of the State Public Employees Federation (PEF), New York’s second-largest state-employee union that represents over 52,000 employees including nurses, attorneys, social workers, parole officers, investigators, and more.
“Today we are proud to announce that the Public Employees Federation will be supporting Jason Salmon in his race for NY-25. As a local community organizer, Jason has proven time and time again to be exactly the type of strong advocate that our communities deserve. From fighting to strengthen organized labor to demanding political representation of all people, Jason has led a movement that has put the voices of our community at the forefront. We are proud to endorse his race for NY-25,” said Wayne Spence, President of the PEF.
“I am proud to receive the endorsement from the New York State Public Employees Federation (PEF),” said Salmon. “I have lived in Brooklyn my entire life and have witnessed firsthand the struggles working families go through to keep their heads above water. This is why as a community liaison, I fought hard alongside working families and unions to improve worker’s rights by increasing wages, guaranteeing safe working conditions, and providing healthcare for all. Today, as we continue to fight the COVID-19 outbreak, I am proud to stand alongside PEF and its 52,000 public employees and 15,000+ healthcare professionals as we continue the fight to protect and strengthen these rights,” said Salmon.
The endorsements are the latest for both Wright and Salmon. Previously, Wright has garnered the endorsements from a number of African-American and Latino electeds throughout Central Brooklyn and the senatorial district including Montgomery and former Assemblymember Annette M. Robinson, along with Assemblymembers Felix Ortiz, Walter Mosley, Latrice Walker and Diana Richardson.
Wright’s wild card endorsement is Assemblywoman Jo Anne Simon, whose district is squarely in Salmon’s base of white and progressive voters on the Downtown Brooklyn/Boerum Hill end of the district.
Salmon’s endorsements include a range of mainly progressive and LBGTQ electeds and organizations including City Councilmember Carlos Menchaca, the Central Brooklyn Independent Democrats, Citizen Action, The Jewish Vote, Equality New York, the Jim Owles Liberal Democratic Club, UAW Region 9A, Lambda Independent Democrats of Brooklyn, and the Stonewall Democratic Club of NYC.
Salmon’s wild cared endorsement is Reverand Anthony L. Trufants, the head pastor of Fort Greene’s popular Emmanual Baptist Church, which touches on Wright’s black base.
Not to be counted out of the race is progressive candidate Jabori Brisport who has the endorsements of the politically powerful Democratic Socialists of America and the Working Families Party among other organizations.
Having two progressives in the race – Salmon and Brisport – could mean they will split the vote, which can help Wright.
However, in an ironic twist, Wright, a black female is being cast as the Brooklyn Democratic machine’s entrenched candidate, even though in reality, Wright’s only entrenchment credentials are to her native Bed-Stuy, where she grew up and for a number of years, owned a small business.
Salmon has a big edge in fundraising as he comes from a family reportedly with deep-pocketed connections.
But with more than a month to go before the June 23 primary election, the pandemic reducing open in-person public campaigning, the logistics of questionable mail-in ballots and the possibility of a low-voter turnout, this election – like many close elections – will likely boil down to who best will turn out their base.
Early voting is currently scheduled to begin on June 13.