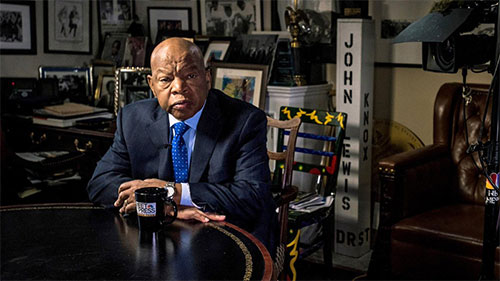 He’s gone to battle for the people time and again, and now Congressman John Lewis of Georgia is in a fight for his life.
“I have been in some kind of fight – for freedom, equality, basic human rights – for nearly my entire life,” Rep. Lewis said in a statement. “I have never faced a fight quite like the one I have now.”
Just diagnosed after a recent routine checkup, the Civil Rights Movement hero says that although he may miss a few votes, he intends to keep showing up to work on Capitol Hill, The Freedom Rides, the March from Selma to Montgomery and The Montgomery Bus Boycott are just some of instances in which he met opposition with commitment and courage. And in doing so, he was brutally beaten more than once, hosed, cursed and jailed. A founding member of SNCC, Lewis also stood up for Rosa Parks and for labor right. He was also one of the youngest people to speak at the 1963 March on Washington, organized by Bayard Rustin and headed by Dr. Martin Luther King Jr. He is also the last surviving speaker from that March.
Lewis has represented his Georgia district for over 30 years and his leadership is highly valued. He has helped to hold what many see as the moral line in Congress in the face of great and important challenges. Our Time Press joins those – sure to be in large number – who wish him health, strength and recovery.

Counting on the Census

Rep. Jeffries: “We Will Impeach Donald John Trump. We Will Clarify That In America, No One Is Above The Law.”