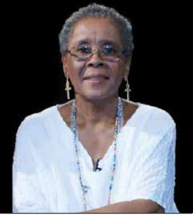 Chicago native, world-class artist Nana Camille Yarbrough has done it all.  She is a performer, singer-musician, actress on the stage, television and film. She is an acclaimed author and poet, and as a dancer.

Nana Camille is a living legend, a Renaissance woman whose timeless works have seeped into the fabric of American pop culture:  a recent national TV commercial featured her iconic song, “Take Yo’ Praise,” released in 1975.

Her art centers around telling of the struggles and celebrations about the profoundness of a people whose very journey to this country was different from any other culture of people who came here looking for a promise.

I had the opportunity to interview Ms. Yarbrough before her recent performance at the Schomburg Center in Harlem. -RW

RW:  Tell us which of your many passions came first, and who inspired you the most?
Nana: My first impulse was to tell the human story, and dance was my gateway — the path I took to the stage. Chicago’s Regal Theater was the place where our great artists performed in Chicago. I watched all of them carefully, but it was Josephine Baker, her excellence and commitment to justice, that gave me the courage to train, study and step on the stage as a performer representing the People of African Ancestry.  (And later) Bill Withers; Earth, Wind and Fire, Stevie Wonder, Aretha, Whitney, Alicia Keys, Ethel Waters, so many. In dance: Katherine Dunham, Dyane Harvey, The Nicholas Brothers. The poetry of the Negro Spirituals, Langston Hughes, Walt Whitman, Zora Neal, Alice Childress.

RW: Your classic song, “Take Yo’ Praise,” was sampled on Fatboy Slim’s track, “Praise You,” in 1998, and was a feature in your one-woman stage tour.

Nana: The name of my one-woman show was Tales and Tunes of An African-American Griot. It was received very well and when Fat Boy Slim put rhythm to it, it became an international hit. But the important last verse was left out.

RW: Your 1979 children’s book, “Cornrows,” has been called “ground-breaking.”

Nana: CORNROWS was my first book for children. It was ground-breaking. But, more importantly, it shared the African tradition of attaching adornment to value systems by naming the braided hair for loved ones, respected ones and important events.

RW:  I am delighted to hear that while you have touched many lives over the years through your works, so many more will now come to know you from a new documentary being done.

Nana: I write mostly about others, but I have been asked to tell more about myself. The documentary does that.

RW: Because you create in so many different mediums, do you get a vision of something you want to share and then say, that’s a poem or a book? What’s the creative process like for you when deciding on how to present it?

Nana: I have a poem (“This is What I Do”) that answers your question:

If there is animosity in our family or community

I say or sing loving songs of satire or ridicule

To ease family pain and sorrow

It is my place, my honor to speak, compose or borrow

A blues lament or

Even a whaling dirge.

In addition to the historical, personal and topical

I say words and sing songs of the religious, the cosmic, the philosophical to rhythms and melodies we all know.

And if a situation calls for a story or a song of praise and glory, with your permission

I will recall the past

and tell and sing your heroic

I am a storyteller

I am a griot

I am a poet

That is what I do.

RW: An African-American presided over this country’s affairs very successfully considering what he had inherited when he became president. How did Barack Obama’s election into office affect you personally?

Nana: I always believed we would have a Black president. He did not disappoint me. Barack Obama was outstanding. But what we have in the White House now is a danger to us and to the world. I believe we will have another African-American president and a female president. Why not?

RW:  If you were giving commencement speeches to graduating classes of 2019 at any university or college in America, what would your message be?

Nana: “Your power, your strong foundation is in your ancestry. It is lit. Your genes are womb-woke. Respect and use them.”