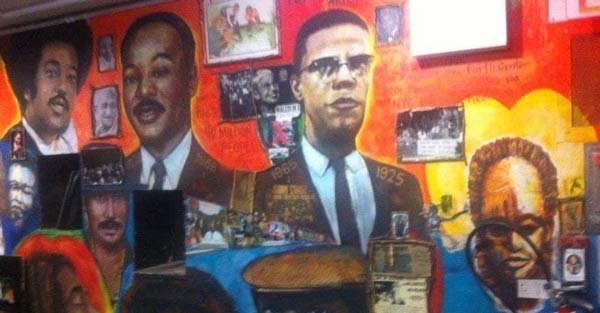 One of the greatest Brooklyn-based mural-memorials to Black leadership in the arts, sciences and politics has been kept under wraps, viewed by hundreds of thousands over a period of years, it has been hidden from public view since 2015.

Akwesi M Asante is concerned about it, and he is becoming the voice for families and residents of Historic Bedford Stuyvesant – North who miss it.
Akwesi M Asante has a right to be concerned as he grew up within blocks of Herbert Von King Park where the 1995 art work adorns the walls of the Eubie Blake Auditorium housed in the Park’s Cultural Center (670 Lafayette Avenue).

Mr. Asante knew the park’s namesake, the late Herbert Von King, called the Mayor of Bedford-Stuyvesant.  He knew the world-famous jazz/ragtime pianist and former Stuyvesant Avenue resident whose name graces the theatre complex.  He knew the community preservationists like Alma Carroll who worked to maintain Bedford-Stuyvesant’s history; and he was impacted by neighborhood giants like urban ecologists Hattie Carthan and Lemuel Mial, who opened doors to the green revolution before that kind of thing became popular.

Also as important, Akwesi M Asante was one of the artists who created that artwork so loved by residents of Bedford Stuyvesant.  But since 2015 when the city closed the Center and parts of the park due to renovations which were expected to be completed in 2018, he has not seen his creations.  Mr. Asante speaks in past-tense when he talks of the community and the art, hidden from view.

“The mural represented the community of Bed Stuy. At a time of strife, with violence, drugs and lack of reflection on African Americans, the mural highlighted the positives, locally and globally.

“In the late 70s/early 80s, I was sitting in the audience, when Mr. Eubie Blake, then in his 90s, received a plaque and was told that the auditorium would be named after him.  I personally would like that his name remain, and I would like to highlight, more of the vibrancy, of this historic African American community, Bed Stuy, and the iconic residents who once lived there and made it great.  I would like other artists to join me in refurbishing the mural in the Eubie Blake Auditorium.  And I just hope it is still there.”

Mr. Asante speaks regretfully of the community, as well.
“Because of changes in the community, there may be less sensitivity for this mural, and it’s depictions.  But if the mural is still in existence, restoration by myself, and other artists, plus the funding to make it happen, are definitely needed.

I would very much like being considered for that vision, of renewal and creating anew.  The Eubie Blake Auditorium, name, should again be highlighted.

In talking about the life of this mural, let’s take a few steps back to look at the artist who inspired it, and his motivations for preserving it.
Akwesi M Asante has served in the performance arts community for over 42 years, having worked in varied genres, from actor, dancer, acrobat/stuntman, musician, circus arts performer and martial artist.

He has worked on and off Broadway, regional theater, film, and television.  His concert stage highlights have included Stevie Wonder’s “In Square Circle” U.S. Tour and Atlantic City, with the late greats, Tito Puente and Celia Cruz.  He performed at Brooklyn Academy of Music’s (BAM) first three-decades of Dance Africa, founded by Baba Chuck Davis, and a slew of world-class dance companies, including The Charles Moore Dance Theater, The Ladji Camara African Dancer and Drummers, The Forces of Nature Dance Company and many more.   He has toured throughout the U.S., Canada, Europe, and Australia, in collaboration with other artists, and he remains a longtime member of the theatrical unions AEA and SAG/AFTRA.

And the audience applause has been thunderous at each performance for those many years of service and performance.  But what is not so well known, although his “signature” is evident on all his works of arts, performing and otherwise, is: Akwesi is a visual artist, a muralist of the highest order. As tall, in fact, as the stilts he maneuvers at numerous community events — his face hidden behind elaborate masks and costuming.

A major turning point that changed the direction of Akwesi’s successful life forced him to look inward.  The date, September 11, 2001.
“After the 2001 horrific World Trade Center incident, I began to focus on my own personal and health concerns, and found myself, continuing my art, with a segue into health, wellness and healing.”

That decision made a profound difference in how he could serve the community in even more powerful ways.  “Since 1992, I had worked with seniors, teaching movement and exercise, but after 2001, I expanded the arena and started working consistently in Health, Wellness and Healing, privately and through group classes, with children, adults as well as seniors.  It was more than a program, more than the pursuit of funding to activate a dream.  It was a mission.”

For many people, anything that happened before September 11, 2001, is blurred, almost as if the year began and ended with one day.  For Mr. Asante, it started off tragic.  His mother, Francis Cuthbertson-Ammonds, as he calls it, “ascended” in February.  During Spring, a life-changing milestone was his move from the Bedford-Stuyvesant streets of Greene Avenue, Vernon Avenue and Bainbridge where he called home for many years.  “I moved to Hell’s Kitchen in midtown.”   The location on 56th Street, near Third Avenue placed him in proximity to The High School of Arts & Design, attended by his daughter  Khalidiah – a straight run for Asante who jogged regularly from Hell’s Kitchen to the WTC.

But that pivotal and tragic September day when the entire city was on lockdown, except for the movement of the masses from the WTC, found him walking fast, careful not to jog so that he would not stumble, to escort  his daughter, from her school.  “She was fine.” Wending his way back cross town, he held her hand, and she stayed close, feeling protected.  “At the time, she lived in Brooklyn with her mom, brother and sister, but she stayed with me for a few days.”

As vivid as that memory is of fatherhood and perseverance, Akwesi, also a great dancer, there’s the one image that he does not focus through a prism: “It’s the shoes,” he told us. “The shoes.”

“As we made our way, I saw shoes – women’s shoes, high heels, low heels … carpeting the streets for blocks and blocks on end, from WTC to uptown; cross town, east and west.”  It’s the memory of the fallout from a war zone that becomes more and more focused each and every anniversary of World Trade Center on 9/11.  Later he would learn of the death of the husband of Broadway star La Chanze (“Broadway’s “Trouble in Mind”) – both close friends. The years following the WTC attack was marked by a pandemic of grief and fear for everyone.

Late October 2003, Mr. Asante completed an “ode” to the World Trade Center on the wall of Kings Pharmacy across the street from Kings County Hospital.  “It wasn’t commissioned. I wanted to keep the remembrance of the twin towers amidst a hospital center where the people – now called essential workers — remain vibrant and keep moving forward.

As a theatrical union performing artist, the Von King center served for many years as Asante’s  practice and rehearsal base. He created the memorable artwork lining the theatre’s walls. One reason: “those legends on the walls of that theatre speaks to the point that these Black lives matter to the community from which these Black lives came.”

So, the mural-work in the auditorium became of nagging importance. At around that time, Akwesi noticed the mural was in need of upgrading.   Lemuel Mial, the Park’s keeper noticed it, too. And so did many in the community, including the late community activist and proponent of elder advocacy, Alma Carroll.

“She was a component of keeping Jazz alive in the Bed-Stuy community just as  her friend Mr. Von King wanted to keep culture and politics alive. I remember Mrs. Carroll telling me that she wanted more from me, artist-wise.  She said she wanted more of Eubie Blake’s legacy in there. ‘He was the premier performer of her time, and he had lived in the neighborhood,’ she always said.

“I never actually finished my work there but would like to add more and preserve what we last saw before the Park closed down in 2015.  Like what the late Mrs. Carrol, wanted me to. If that happens maybe can do the same for the Hattie Carthan mural across the street at the Magnolia Tree Eart Center of Bedford -Stuyvesant.”

For us at Our Time Press, Asante’s testament to hope and faith of a family looking up and walking proudly is as much a salute to documenting the human spirit, post 9/11 as any.  It is located on the Magnolia Tree Center wall facing east on Lafayette.  “It’s not in the best of spots, it’s fading due to climate change,” said Asante, adding he hopes it can be saved.

The mural is inscribed with the words “There’s nothing better than Love than Loving.”  I had been through some hard times in 1999, and I wanted the mural to represent strength and strengthening, within this African American family focusing their attention forward and upwards.

Asante Akwesi has participated in 5 NYC Marathons and has served as a warm-up coach for NYRRC pre-races.  While he gears up for his sixth marathon, this fall, he is resolute in what has now become a life-long marathon: “bringing attention to the spirit of this community by preserving such art as the mural inside the Eubie Blake Theatre.  These murals are waiting for attention. I’ve got to take it one step at a time.”

Herbert Von King Park has been closed to the public for six years, and Mr. Asante recently sent a message through Change.com to the administrators of NYC Parks & Recreation: he wants to see what is behind those close doors.  If the mural is still there, he wants it preserved, and he wants to be part of that preservation process.

But there is something else that gnaws at the back of Asante’s mind. “I wish I had documented the shoes.  The shoes on the streets and the bikes locked up that remained where they were for so long.

Meanwhile, as Mr. Asante seeks ways to capture that memory for posterity through his art, he is taking bold  steps to preserve an unrecognized New York City landmark in Bedford Stuyvesant.