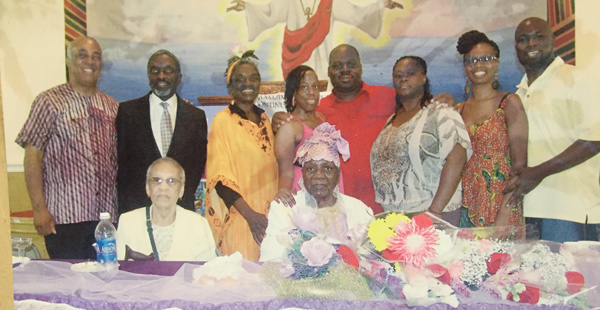 by Bernice Elizabeth Green
NYC Councilwoman Inez Barron is an accomplished woman and has met nearly every goal she has ever accomplished on the power of her work ethics and the backs of the ancestors.
But place and people are part of the journeys of all peoples of color, and Councilwoman’s Barron’s story is no different. The sources of her girlhood inspiration are near: her mother, her friends and a house in Stuyvesant Heights purchased by Black women in 1945.

In 2013, journalist Suzanne Spellen, for Brownstoner.com wrote that the house has a story to tell: “It’s a story of success, money, faith, family, tragedy and spite. Followed by a bit of inspiration, mystery, good deeds, and benign neglect. A lot for one property to hold, but this is some property. No. 87 Macdonough Street is one of Bedford Stuyvesant’s jewels. In a neighborhood that does not have too many of its old freestanding villas and mansions left, this house remains one of Brooiklyn’s largest and best architectural examples when life in the suburbs meant a journey to Stuyvesant Heights.”

Headquartered in Norfolk, the United Order of Tents (UOT) woman’s fraternal lodge dates to 1848. Founded in Norfolk, Virginia by two former enslaved women, Annetta M. Lane and Harriet R. Taylor, it is the oldest Christian organization in the U.S. organized and primarily populated by women. The lodge was started as a station on the Underground Railroad for formerly enslaved Black men and women enroute to Canada. “Often the escapees would huddle in tents,” wrote Spellen, “hiding in woods and remote places, giving birth to the organization’s name.”

“Their mission to be a tent of salvation for the African American population inspired the organization’s goal to feed, clean, and provide nursing care wherever necessary. Most of their membership were registered and trained practical nurses. They supplied needed medical care in the black community, and offered burial insurance, guaranteeing that a decent burial would be provided after death. They raised money for orphanages, hospitals and homes for the elderly. During the 1920’s through the 1940’s, the United Order of Tents had their greatest growth and strength of membership, and it was during this period, in 1945, that they purchased the big mansion at 87 Macdonough Street.

“Not much is known about the branch of the United Order of Tents, here in Brooklyn,” Spellen wrote. But, eight years, later more information has come to light as the Tents still own the property, and members are still working the mission.
Inez Barron was a witness to that mission in action. She grew up in the path paved by those activist women: to become the teacher that they were to her; and the committed activist who followed in their example.
“My mother took me to the meetings, and I was assigned tasks to do. I was given life instructions, and I carry them with me to this day. Pursuing excellence was just one of them.”

Inez Barron’s professional experience includes work for the New York City Board of Education in various roles, including as a classroom teacher, teacher trainer, early childhood district coordinator, executive assistant to the community superintendent, assistant principal, and principal.
Inez Barron is the Democratic District 42 representative on the New York City Council.
Barron earned a B.S. in physiology from CUNY’s-Hunter College and an M.S. in reading and special education from Bank Street College of Education. She attributes her success to her mother and her mother’s “Tent Lady” friends.
Of course, speculation over what will happen to the house will always be.

Last week, Stuyvesant Heights resident Evelyn Collier tipped us off to the Macon Public Library’s presentation on the house and the ladies, “Who Owns 87 Macdonough St.? An Introduction to The Tents.” She learned about it the day it was happening, so we were unable to Zoom. Moderated by Sheena Daree Miller, the virtual tea explored the legacy of the organization which was dedicated to wellness and Civil Rights. Apparently, members of the Tents participated.

Spellen ends her piece with this:
“Their ownership of the house is a vital part of its survival; it may never have made it otherwise, as most houses on large, developable plots of land are gone. For this storied mansion, the Tent Ladies were indeed a tent of salvation.” And a Tent under which legacies were protected and lessons were learned about women of strength and vision, raising girls to be strong women.

The Tent Ladies’ interest in mentoring young women can be seen today in the example of Girls for Gender Equity (GGE), an intergenerational grassroots organization located in downtown Brooklyn, committed to the physical, psychological, social, and economic development of girls and women.

Next week, Inez Barron introduces us to the “leading Lady” in her life, who is still actively telling her stories.

A Year of Loss Claimed Many Faith Leaders