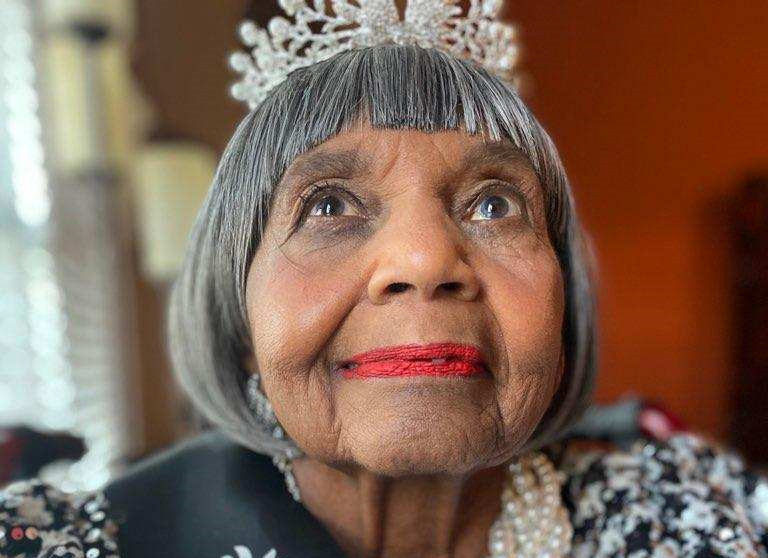 Emily Crisp (above) was born in Hague, VA on January 8, 1920. She moved to Corona, Queens in the 1940’s and was employed as a domestic worker. She then moved to Roosevelt, LI where she married James Crisp. After he passed in 1994, she moved to Hempstead to an “Over-55” community residence.
In 2017, she left NY to be close to her son Crawford in Gibsonville, NC. She traveled a lot in her younger years and was a notable dancer (not professional) who frequented many dances. Bowling was another favorite activity and she bowled for many years for the Islanders Bowling League. Aunt Emily is revered for her compassionate loving nature, witty sense of humor and radiant smile! (She is the sister of my paternal grandfather Joseph Gaskin)

Mrs. Daisy Mae Shavers, 100 on January 8th (born in 1920), is a Life and Legacy Member of the National Council of Negro Women, Inc., Brooklyn Section, where she serves on the Nomination Committee to the Harambee Awards Program which supports youth empowerment. Daisy is also a Life Member of Church Women United, and a member of the Women’s League of Science and Medicine. In addition, she is a member of the Effective Leadership Organization.
She joined Brown Memorial Baptist Church in 1976 under the leadership of the late Rev. Samuel Austin, and remains a faithful servant under the current pastor, Reverend Clinton M. Miller. Her celebration was held on January 11 at Brown Memorial.
Attorney General Letitia James, Congressman Hakeem Jeffries, Public Advocate Jumanne Williams, Assemblyman Walter Mosley and Judge Robin K. Sheares were in attendance. Sending representatives and or greetings were Mayor Bill DeBlasio, Brooklyn Borough President Eric Adams, NYS Senators Velmanette Montgomery and Roxanne Persaud, NYS Assembly member James Williams and Councilmember Farah Louis.