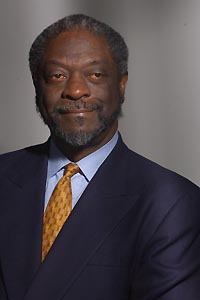 To say that journalist Les Payne was a great man is an understatement as his wake at the historic Harlem Abyssinian Baptist Church in Harlem proved.

In a homegoing viewing attended by journalists, politicians – both former and current – and a slew of other esteemed guests, it was evident that Les Payne lived a life that impacted many.

Payne, who had a column in Newsday for decades, was remembered by his friends, family and former colleagues. Among some of the notable guests were Charles Rangel and David Dinkins.

Former NAACP President Hazel Dukes spoke fondly of her friend. “[Payne] was a man that embodied all that he walked and talked …a race man whose legacy will not be lost.”

She recalled meeting Payne in the 1960s when he covered a story about her moving into a home in Roseland Gardens, NY. What was significant about this story, as Ms. Dukes explained, was that her move into this house made her “the first African-American to move into a home that didn’t allow Blacks to live in.”

In vivid detail, Ms. Dukes recalled, “Payne broke the story. We were both from Alabama, we became good friends. We had our ups and downs as Violet (his wife) knows.”

A minister, Rev. Young recalled Payne “always sitting on the balcony [of the Abyssinian Baptist Church] in the same seat every Sunday,” in addition to his infectious and distinct “laugh.” Rev. Young also reflected on Payne having shared with her that he “interviewed many presidents” and that he was also “always giving her a book or article to read.” She remembered Payne being “calm, kind and firm,” and that he “got his point across in a non-intimidating way.”

A niece of Payne spoke to the humble nature of her uncle. Though most knew Payne to be this remarkable journalist and great man, to her, Payne was just “uncle.” In fact, she recalled, when she, her uncle, and their other family members would go out to eat, for example, Payne would never boast about any of his accolades. Ever. Payne’s son, Jamal Payne, referred to his father as a “hero,” but also revealed that he did not always want to share his dad with the world.

Jamal said he now understands his father’s sacrifice and the seeds he planted would now be harvested by his family members. On a lighter note, Jamal stated that Payne was not from Wakanda, as someone had previously suggested, but instead from his actual hometown of Tuscaloosa, Alabama, but more significant: the meaning of Tuscaloosa is Black Warrior in Choctaw.

Priscilla Mensah covers topics related to improving health, wellness and overall community empowerment. She is also a former Health Reporting Fellow at the CUNY Graduate School of Journalism and can be reached at pmensahbrooklyn@gmail.com.