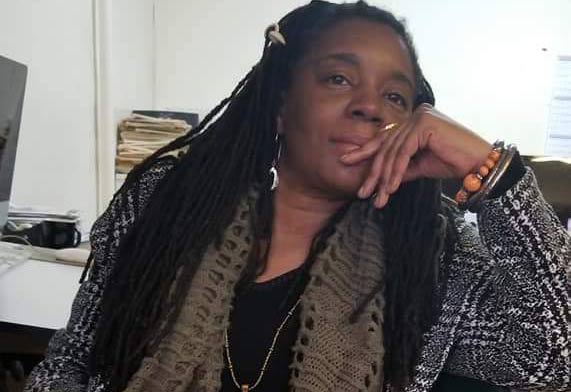 It was an easy decision on who would be our top pick to usher in the new year, reflect on the old, plus launch the beginning of Our Time Press’ 25th.
Journalist Nayaba Arinde leads an exceptionally long line of fine journalists who are passionate about their work and committed to using their gifts to keep our communities inspired and informed.

These scribes impact the community in meaningful ways without publicity or fanfare. And so, it is with Naya, who has influenced Our Time Press for nearly two decades.
Thank you, Elinor Tatum, for allowing one of your most loyal and brightest stars to hang out with us here on the other side of The Bridge.

I came to the Amsterdam News in December 2005, with gratitude and almost disbelief that I was the editor of such an historic, prestigious, and internationally known newspaper.
I wanted to bring news to our community, that may have otherwise gone un or under-reported, or laid out with the usual twisted bias that puts the community in unbalanced light.
I wanted to continue that strong, unapologetically Black perspective to tell our stories. To empower us through the written word, to challenge the racist stereotypes and go against the institutionalized racist system on every level. That has always been my raison d’etre.
I believe, and I always tell my reporters and interns, that there are two types of journalism which Black and independent media engage in: straight reporting and advocacy journalism.
Whether as a reporter, editor, or radio host in England, or the same here, I have always worked with this mantra.

Reporters can be in the room with politicians, socio-economic policymakers, community leaders, grassroots activists, and influential and everyday people. We must make those moments count so that we ask the hard and effective questions. You may get only one chance to ask that question that the community wants an answer for – so ask it, I tell them. Be respectful, but unafraid.

One of my many Nayaisms I tell new interns on day one is this: will be a baptism of fire, my staff and I will offer all the assistance we can, but I want you to hit the ground running, researching, reporting, writing. Black bylines matter!
If Obama is in town, you will attend the event, and you will ask him a question. What would you ask him? I would say. They laugh, shuffle nervously perhaps, but they would come with a poignant response eventually.

I want them to be excited about journalism, and to know that while they were at the Amsterdam News for their ten-week stint, they can request an interview with anyone in our demographic they want to. Many did, from business and educational leaders, to cultural icons and entertainers. (Must say: Beyonce’s name came up A LOT from Millennials and Gen Zs!)
I want to encourage independent thinkers. I would love a ‘steeple-free zone,’ but you know!
Be the journalist that people buy the paper and hunt for your byline, I tell young journalists. Be informative and engaging in your writing.

Diary, blog, op eds, articles, freelance. Just write, I tell young people. Oh, you’re a rapper? Then put your issues in a verse with your bars. Hit us with some solution-based lyrics. Just write. Hone your craft.

I have been able to ensure that we cover many stories strictly from a “Black (although we are not monolithic) perspective”. For example, we covered the COVID 19 pandemic and how it affected our community. We never missed a single issue, even though we were all initially uncertain about whether it was a plandemic or a real global medical crisis.

We talked to the community. We wrote about resources and options. We spoke to essential workers in all fields, and the city and state government. We broke news about those suffering from the virus; those we lost, and those who recovered. We unapologetically embraced our community in this moment of international concern, where New York was the epicenter.
As always, we saw our reporting – headlines, themes, direction, flavor and all ripped and reproduced without credit, by the mainstream print, digital and aural media,
We are clear about our mission when it comes to reporting on inner city violence – there is no safe harbor, no sugar-coating.

We go hard on the continuous, unpunished police brutality. We demand redress to the homelessness, the burgeoning unemployment, the educational disparity. With unswerving base in our voice, we call on the electeds to answer to the Black community assaulting gentrification. But we also ensure that we celebrate ourselves. We big up our special young achievers and entrepreneurs and academics. In our weekly Black New Yorker section, I try and ensure that we have a conversational resume of an article about everyday people doing big things.

Rest assured, on Thursday morning interns or staffers at City Hall and the Governor’s office – and all those in-between — were sent to purchase the Amsterdam News from the newsstands in ye olde days or click on our website to figure out what those Uptown Black folks were thinking! Not writing for them. We are talking to our community.

NAYABA ARINDE is an activist, and an award-winning reporter, and Editor of the New York Amsterdam News.
Nayaba was an activist, reporter, editor, radio host and producer in England, before she came to America to become a journalist based in New York.
A winner of multiple professional and community awards, Nayaba has been a longtime grassroots activist – local, national and international – focusing on social justice, economics, culture education, and the criminal justice system.
Now a host and producer of Back to Basics on Diasporaradio.com, she has worked as a radio host and producer from the BBC Manchester, England to WBAI in New York.
From organizing behind the scenes to marching on the front lines, after 20 years of reporting, hosting shows, panels and political debates, Nayaba has interviewed people across the political, social and cultural spectrum in England, the U.S. and in Africa.
After her battle with breast cancer, Nayaba, a single mother of two, has adapted to life living with Multiple Sclerosis, and launched her community-support Square Circles and Survivor Nation organization.