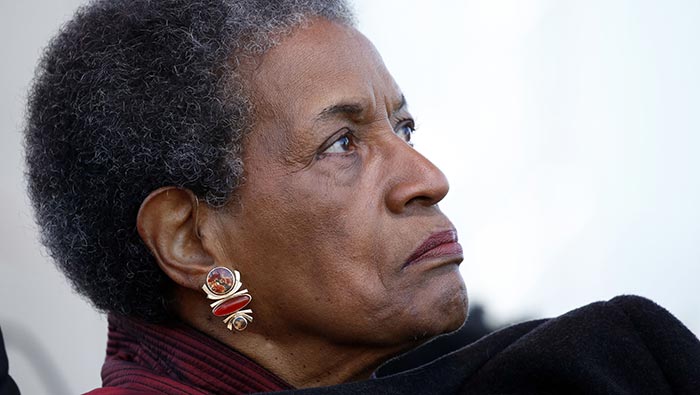 The letter to the CUNY Board of Trustees concerns the reappointment of President Rudolph Crew to Medgar Evers College for the 2020-2021 academic year, amid pushback and protest from a group of faculty, staff and students.

Her testimony summarizes her agreement to have the College named after Medgar Wiley Evers 50 years ago and expresses concern that President Crew has been accepted back into the College.

BK Reader reported, “This is a public document and part of the record of testimonies forwarded to CUNY Board of Trustees.” (Visit: https://www. bkreader.com) For clarity, Our Time Press is reaching out to Ms. Evers-Williams’ office, Mr. Crew, CUNY Communications and principals on both sides of this evolving issue.

Dear Chairman Thompson and Members of the CUNY Board of Trustees:
“There comes a time when silence is betrayal.” – Dr. Martin Luther King Jr. 1963
Thank you for the opportunity to provide testimony on an important and vital issue concerning Medgar Evers College. It is with deep regret that I write you at this time concerning the Chancellor Rodriquez’s recent announcement that he is recommending to continue the position of President of Medgar Evers College to Dr. Rudolph F. Crew through the end of June 2021.

My family and I were not only shocked by the communication, but appalled by the insensitivity to the students, community and family outcry for a better college experience that such a decision was reached.
As our family expressed in 1969 and since, to happily agree for College #7, to be named after my late husband, it was with the understanding that the University and community would honor not only his name, but also his legacy.
Our family believes deeply in historically Black colleges and the missions they represent. While Medgar Evers College is a Public Black Institution (PBI), it has always been the expectation of the family that Medgar Evers College would model and reflect the standards of excellence of sister HBCUs and follow the mission of CUNY in its quest for access and excellence.

The legacy of my late husband, Medgar Wiley Evers, has been honored and respected throughout America and far beyond. When Medgar Wiley Evers was not able to speak at City College’s commencement in 1963 because he had been assassinated, Dr. Martin Luther King Jr. gave the commencement speech.
“Our deep concerns have turned to extreme disappointment regarding the rapid downward descend of the College and the embarrassment it has become to the family, the Founders, the Brooklyn Community and quite frankly, the nation.”
My family and I were more than pleased when the community leaders of Bedford Stuyvesant and Central Brooklyn, requested our permission to recommend to the Board of Higher Education of the City of New York, that the new college being planned for Brooklyn, New York (1969) be named after my husband. The recommendation was accepted. Black Brooklyn’s long struggle for a college was finally achieved, and it would be named Medgar Evers College (1970).

At this time however, our deep concerns have turned to extreme disappointment regarding the rapid downward descend of the College and the embarrassment it has become to the family, the Founders, the Brooklyn Community and quite frankly, the nation.
As an institution of higher learning, adopted and embraced by the community 50 years ago, it was the intention of the Founders for it to represent, demonstrate, and deliver the highest of academic integrity, moral and ethical values. We give our utmost respect to those individuals who have and continue to sacrifice much to ensure that this senior college was established in such a diverse and engaged community as Central Brooklyn.

It is for that reason that I again write the Board of Trustees to express that I am appalled and surprised to learn that this President has been accepted back to the University following his announcement to the Medgar Evers college community that he planned to take a position as Superintendent of the DeKalb County School District in Georgia, effective
July 1, 2020. It is discreditable that CUNY would reappoint a President whose past record of leadership has been questioned by other educational institutions across the nation in both the K-12 and the College system.

We, the family, strongly resent a decision that will continue to send the college in a downward spiral through expedience, complacency, silence, “benign neglect,” or friendship. In doing so, the University appears to be complicit in exacerbating a deteriorating situation in an Institution that carries our family name.
We are aware of the many reports that have demonstrated lack of performance administratively and in management as reflected in the University’s own assessment documents (PMP) for the past five years. Further, in these documents, the College represents the lowest among CUNY in effectiveness and accountability in the areas of admissions, retention, transfers, graduation rates, institutional development, and faculty recruitment since the President’s arrival at Medgar Evers College.

For an institution, that should have many more young administrators and creative and gifted scholars to face students, many have left the institution of Medgar Evers College for other CUNY institutions because of incompetence, insecurity, intimidation and unparalleled mediocrity from its leadership. For the record, in July 2013, the administrative leadership announced their ambitious Strategic Plan for the “25s”: 25% increases in enrollment, retention, graduation rates, and fundraising.

To this date, not from our observation, but CUNY records reveal that the college leadership has not fulfilled the goals of this strategic plan, nor is there a documented current strategic plan that has been adopted by the College. Lastly, the so-called Pipeline that the Chancellor referred to in his letter recommending the President’s reinstatement, may theoretically be consistent with elements of CUNY’s mission, but it has been a complete failure at Medgar Evers College and a laughing stock in the Brooklyn community. (Please review the data and even the College’s website).
These concerns are amongst many that were presented to Chancellor Felix Matos Rodriquez and Governor Cuomo and as I stated, the Chancellor informed me that this matter would be handled by the Chairman William Thompson of the Board and the Trustees of CUNY following the report by the AACU panel.
Medgar Evers College has been viewed as a Beacon of Hope and Opportunity, and we believe that the University 50 years ago, was committed to ensuring that the mission and legacy would be honored and reflective of Medgar Wylie Evers’ sacrifice for justice and social equality.

Unfortunately, we question CUNY’s commitment and courage to right a terrible wrong at this time, and in view of what’s at stake for our young people who come to Medgar Evers College expecting high standards, steps need to be taken immediately to avoid having students short-changed and treated as second-class students. It is with this concern and in this spirit, that the family and I come before you today and provide this testimony.