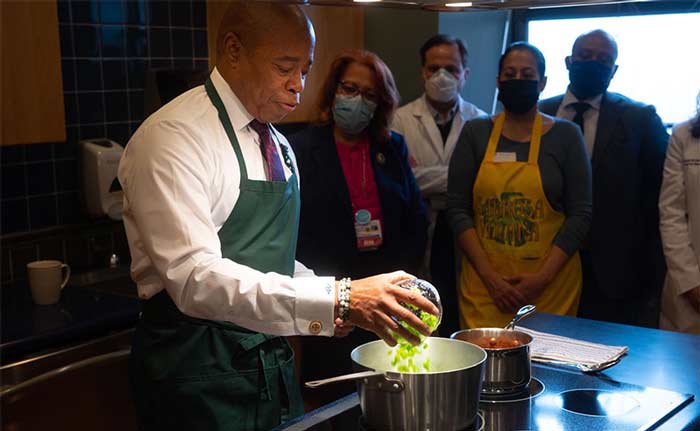 “Today, New York City is again leading the way with the most comprehensive expansion of lifestyle medicine programming in the nation,” Adams said Monday. “This is personal to me — a plant-based lifestyle helped save my life, and I’m thrilled that New Yorkers in every zip code will have access to this critical programming. Together, we will stop feeding the health care crisis and ensure all New Yorkers can access the healthy lifestyle they deserve.”

The program will become eligible to adult patients at sites in each borough — Jacobi, Lincoln, Woodhull, Kings County, and Elmhurst hospitals, and Gotham Health, Vanderbilt — over the next year, the mayor said. It builds on Bellevue Hospital’s Plant-Based Lifestyle Medicine Program which was launched in 2019 when Adams was Brooklyn borough president. Monday’s announcement is Adams’ latest initiative to encourage plant-based diets in New York City after the Department of Education made public school lunches vegan on Fridays starting last week in a rollout that was criticized for having meager offerings in some schools. Adams faced criticism again last week and Monday when sources close to the mayor said he occasionally ate fish, despite fashioning himself repeatedly as a strict vegan for years, including on the mayoral campaign trail.

“Let me be clear: Changing to a plant-based diet saved my life, and I aspire to be plant-based 100 percent of the time. I want to be a role model for people who are following or aspire to follow a plant-based diet, but, as I said, I am perfectly imperfect, and have occasionally eaten fish,” Adams said in a statement to Politico New York.