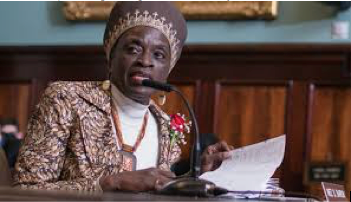 Inez Barron is the former Assembly member representing East New York, and is wife to former City Councilman Charles Barron. The spouses switched seats in 2013 after Charles Barron was term-limited out of office.

In going against the Barron juggernaut, which has controlled politics in the East New York area for close to 20 years, Hormeku said he respects the Barrons for their passion, but that change now is desperately needed to stem the tide of encroaching gentrification.

“Under the guise of black nationalism, the Barrons have been promoting poverty through social engineering and panhandling from the government instead of developing social entrepreneurship and ownership,” said Hormeku.

“If we don’t find ways to own the neighborhood we will be displaced, and the only way to that is through education and economics,” said Hormeku. “We have to develop the mind-set that we can’t depend on the government and we have to learn to handle responsibility ourselves. We can’t worry about how the Trump Administration will affect our community through budget cuts. We need leaders to create new revenue streams so we can do for ourselves.”

Hormeku draws inspiration from his father, Kofi Hormeku, who brought his young family from Ghana, West Africa and raised them in Brownsville, where he was one of the original owners of a Nehemiah Home, an early 1980s cooperative effort between local churches, community organizers and the city to build affordable single- and two-family brick town house homes in Brownsville, East New York and Spring Creek (the Starrett City area).

In 1994, the elder Hormeku founded Nehemiah Economic Development, Inc. (NED), 1168 Lenox Road, which promotes social entrepreneurship via ownership. Meanwhile, Mawuli grew up in the Nehemiah Homes and went on to graduate from Brooklyn Tech, before earning both a Bachelor’s degree in Psychology and Master’s of Education from Boston College, and a Master’s in Educational Policy and Social Analysis from Columbia University.

He then traveled the world extensively to research and lecture on the topics of education and pedagogy before returning to Ocean Hill-Brownsville and East New York to become NED’s executive director.

As part of this effort, NED established The Kofi Hormeku Scholarship, a 10-year commitment of $50,000 to the Fund for Public Housing via a collaboration with CUNY, students residing in NYCHA housing in Ocean Hill-Brownsville and East New York. The organization also awards $20,000 to graduating high school seniors attending a four-year college in the fall who live in the areas of Ocean Hill-Brownsville and East New York.

Hormeku said rather than look to the government for help, the greater communities of East New York and Brownsville have to begin “legacy building.”

“We have to start making plans for our children for years to come,” he said. “Right now, people are just passing down memories. We have to change our mind-set through vocational, educational and economic self-empowerment.”

The City Council Primary is slated for Tuesday, Sept. 12.

When Mayor de Blasio released his plans to open over 90 homeless shelters, it sent shock waves throughout the city. Frankly, I felt that shock