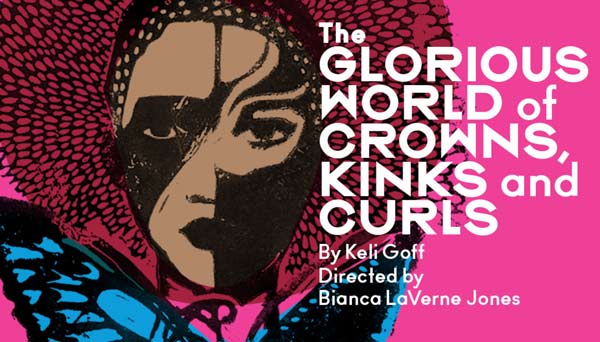 Journalist/PoliticalCommentator/Pundit/Author
and Playwright on “The Glorious World of Crowns, Kinks and Curls …”

The Glorious World of Crowns, Kinks and Curls is a world premiere play written by multiplatform storyteller Keli Goff.
Broadway World described the play as “A collection of monologues in the tradition of For Colored Girls…, The Glorious World of Crowns, Kinks and Curls explores the complex relationship women have with their hair, and reveals that for Black women in particular, hair is deeply personal and political.”
In sharing playwright Keli Goff’s background, BWW noted that she has previously written about the politics of hair as a journalist.”

And there is more to Keli Goff. The Missouri, Texas born journalist, playwright and screenwriter first came to prominence as a blogger and political pundit/commentator during the 2008 election.
She is recognized for her contirbutions to The Hunfington Post and her appearances on various television networks as a political pundit. She considers herself a multi-platform storyteller best known for chronicling the intersections of race, politics and gender in America. he was a political correspondent for The Root. Goff is the author of The GQ Candidate novel published in 2011 with the paperback published in 2012.
Her first book, Party Crashing: How the Hop Hop Generation Declared Political Independence examined the perspectives and impact of younger voters and members of the Post Civil Rights Generation on the political process, with particular focus on the 2008 election.
Her stories include Why Some Women Don’t Vote With Their Vaginas for HuffPost; What Adele Can Teach Ivanka Trump (and All of Us) About Motherhood for Glamour, The Complexity of #MeToo for Black Women for The Hollywood Reporter.
Her essay Living the Dream is featured in the collection The Speech: Race and Barack Obama’s A More Perfect Union.
Her other writings as a journalist and essayist has appeared in the publications Time, Vogue, The Washington Post(and its blog, “She the People”), Essence magazine, UPTOWN, Cosmopolitan, The Guardian,the Daily Beast and web editions of the New York Times and New York magazine. Goff’s bylines also include Vogue Magazine, The Hollywood Reporter, The Nation and Town & Country Magazine. Her columns have been the subjects of coverage in such outlets as The Wall Street Journal and The New York Times.
During the 2016 election she was also the host of a live event series for WNYC (the National Public Radio New York affiliate.) Political Party with Keli Goff, about “sidestepping the horse race of the 2016 elections to dig deeper into the people and ideas shaping our political landscape” at The Greene Space at WNYC & WQXR in Soho.
In 2013 Goff began working on her first documentary, interviewing pro-life and pro-choice activists about the history of reproductive policy in America. That film would eventually become “Reversing Roe,” released on Netflix (along with a brief theatrical run) in September 2018. In 2019, the work on “Reversing Row” earned Goff, along with directors/fellow producers Ricki Stern and Annie Sundberg, nominations for two News/Documentary Emmy Awards.
In 2014, Goff was an anchor at the Women in the World Summit in 2014 for the Toyota Solutions Studio.
That year, she began crafting stories for theater, film and television. Three years later, in 2017, she began writing for the CW television series Black Lightning based on the DC Comics.
In 2019 she wrote for the television series Twenties, produced by Emmy winner Lena Waithe.
Though best known for covering politics, Goff has written about fashion for publications like New York Magazine and Town & Country, and is known for her interest in vintage clothing, particularly pieces by historically significant designers of color. Some pieces from her vintage collection are housed in the Texas Fashion Collection.
A native of Missouri City, Texas, Goff holds a bachelor’s degree from New York University and a master’s degree in strategic communications from Columbia University.
Earlier this year, it was announced that Baltimore Center Stage would produce Goff’s play, “The Glorious World of Crowns, Kinks & Curls” a collection of scenes and monologues about the relationship between black women and their hair.
Last month, Goff joined the writers’ room of the Sex and the City revival, And Just Like That.
Information on”The World of Glorious Crowns…” a collection of scenes and monologues about the relationship between black women and their hair, set to launch in virtual production, is elsewhere on this page.
“The World of Glorious Crowns, Kinks and Curls” will be streaming, March 25 – April 18. To Book Tickets, contact:
Marcia Pendelton, President and Founder, Walk Tall Girl Productions.
Facebook: @walktallgirlproductions
Twitter: @blktheatronline
Instagram: @walktallgirl