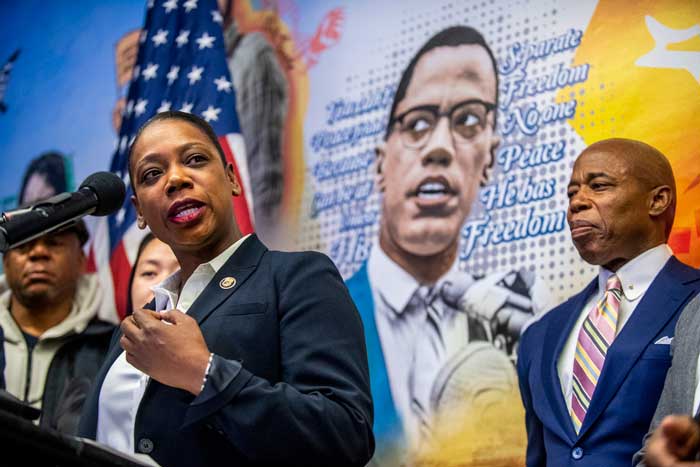 Sewell, whose first home was Queensbridge Houses, will be the first woman to serve as Commissioner of the NYPD in its 176-year history. A 25-year veteran of the Nassau County Police Department, she has worked as an undercover officer, protected students in schools, led hostage negotiations, spearheaded initiatives to get guns and drugs off the streets, and been a member of the federal terrosism task force. She also led Nassau’s Major Case Bureau and its Professional Standards Bureau. Sewell currently serves as Chief of Detectives, the first Black woman to serve in that position.

“As someone who wore a bulletproof vest for 22 years protecting the children and families of this city, today is a very meaningful day. I believe in New York’s Finest, because I have seen and been part of some of our proudest and most tragic moments – from 9/11 to the tragic assassinations of Officers Rafael Ramos and Wenjian Liu. And I also have been a clear and consistent voice for accountability throughout my law enforcement career, because I know that when an officer violates their oath to protect and serve, it undermines the nobility of public protection.

“To lead this department into the next chapter of our shared history, I conducted a nationwide search of some of this country’s brightest talents. I am thankful to every candidate who was interested in this important assignment, but am particularly proud of the historic choice we have made. Chief Keechant Sewell is the right woman to lead New York’s Finest at this critical moment in our city’s history. She not only has the experience to step into the role of Commissioner – she also has the emotional intelligence that is necessary for healing the divides between police and communities. I look forward to working with her to deliver the safety all New Yorkers need, and the justice they deserve,” said Mayor-elect Adams.

“For the past 25 years, I have immersed myself in the work of policing. My wide breadth of experience has shown me what works in law enforcement, and what doesn’t,” said Chief Sewell. “We are at a pivotal moment for New York, as our city faces the twin challenges of public safety and police accountability. My job as Commissioner will be to carry out the vision Mayor-Elect Adams has articulated. To do that, we must engage with our entire ecosystem of public safety, including our Crisis Management System, clergy leaders, and other groups on the ground. The NYPD has an important role to play in making our communities safer, but we cannot do it alone.

“I am deeply humbled by the historic nature of this announcement. As the first woman and only the third Black person to lead this department in its 176-year history, I will bring a different perspective to the NYPD. I am firmly committed to making sure the department looks more like the city it serves, and elevating women and Black and Brown officers into leadership roles. The NYPD is the best of the best—and it’s about to get better. My shoes are laced up. I’m ready to get to work.”

Black Leadership Matters to Brooklyn and the City