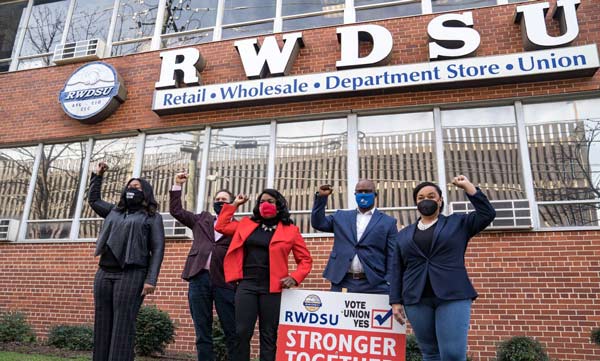 Labor leaders and lawmakers are calling this one of the most important union elections in the history of the United States.
Jamaal Bowman at a press briefing outside of the RWDSU Mid-South Council’s union hall in Birmingham, Alabama, March 5, said: “I want Amazon workers across the country to pay attention because you should be doing the same thing in your workplace.
“And we’re not stopping with Amazon. This is Lyft, this is Uber, this is Walmart, this is Tesla — all the companies across this country that continue to be abusive and provide terrible work conditions for workers, we stand with you.”
He said the union campaign in Alabama demonstrates the need to put better worker protections in place at Amazon and other companies in the U.S. He described the working environment at Amazon as a “culture of abuse” and surveillance.
“If workers get out of line, they receive some form of a demerit and if you accumulate enough demerits, then you are fired from your job,” Bowman said. “Are we dealing with machines or widgets, or are we dealing with human beings?”
Several workers from the Bessemer Amazon facility also attended the briefing. Kevin Jackson, a BHM1 employee, said the union campaign is about ensuring Amazon workers have “a place at the table like everyone else.”
“We’re here to say that we’re not going to be intimidated by anyone trying to say they’re going to fire us, due to what we want,” Jackson said.