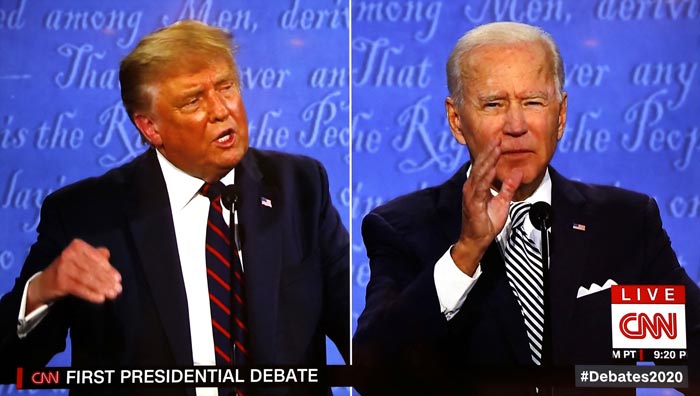 By Daniel Dale &
CNN staff  (Excerpts)
The first 2020 presidential debate Tuesday night in Cleveland featured an avalanche of lies from President Donald Trump — while Democratic presidential nominee Joe Biden was largely accurate in his statements, though he did make some false or misleading claims.
There were times, particularly during the conclusion of the debate, when almost every comment from Trump was inaccurate. Most of his false claims were ones he’s made before and which have been repeatedly fact-checked and found to be false, rather than one-time slips or gaffes.
Fox News’s Chris Wallace moderated the debate, which covered both candidates’ records as well as the Supreme Court vacancy, Covid-19, the economy, the recent racial justice protests across the country and questions about the integrity of the upcoming election.
Here’s what they said.

Election fraud
Trump used the debate to spread disinformation about mail-in voting and repeated many of the false claims that he has been making all year — including the lie that mail-in voting leads to massive fraud.
“They’re sending millions of ballots all over the country,” Trump said. He added: “This is going to be a fraud like you’ve never seen.” He later said mail-in voting is “a disaster” and claimed that “it’s a rigged election.”
Facts First: Trump is lying. There is no widespread fraud in US elections. There are safeguards in place to prevent fraud. States will be dealing with a historic level of mail ballots, which poses a challenge, and there are isolated incidents of fraud. But there is no systematic vote-rigging, including with mail-in ballots.
CNN has repeatedly fact-checked these claims. Millions of Americans voted by mail in the 2016 election, and again during the 2020 primaries, and there has not been widespread fraud. Comprehensive studies of billions of ballots cast over many years indicate that the rate of voter fraud is less than 0.0001%.– Marshall Cohen

Ballot security
While railing against mail-in voting, Trump cited an incident that recently took place in Pennsylvania.
“They found some with the name Trump, just happened to have the name Trump, just the other day in a wastepaper basket,” Trump said, adding “they all had the name Trump on them.”
Facts First: It’s true that there was an incident with a small number of discarded ballots in Pennsylvania, but it’s baseless for Trump to cite this as an example of “voter fraud” and of a “rigged” election. Also, he got the number wrong: There were nine discarded ballots, of which seven were Trump votes.
According to federal and local authorities, an election worker improperly threw out nine military ballots in Luzerne County. In an extremely unusual announcement, the Justice Department said all nine of the ballots were marked for Trump, before issuing a correction and saying only seven were Trump votes. Local officials said they will try to reach the affected voters and fix the ballots.
Trump’s campaign has cited this incident as proof that Democrats are “stealing” the election. Trump echoed this on Tuesday night, while accusing his opponents of “fraud” and saying, “They cheat.” CNN fact-checked these claims last week — there is no proof whatsoever of an anti-Trump conspiracy.– Marshall Cohen

Supreme Court and the Affordable Care Act
In an exchange about filling the Supreme Court seat left vacant by the recent death of Justice Ruth Bader Ginsburg, Biden said Trump’s nominee Judge Amy Coney Barrett thought the Affordable Care Act is unconstitutional. The landmark Obama-era health care law is being challenged by the Trump administration, in a case that’s due to come before the court in November.
“She’s written before she went on the bench, which is her right, that she thinks that the Affordable Care Act is not constitutional,” Biden said.
Facts First: This needs context. It is unclear which of Barrett’s writings Biden was referring to but an essay Barrett wrote before she was appointed to the US 7th Circuit Court of Appeals by Trump in 2017, has generated a lot of attention since her nomination.
In that essay — a January 2017 law review essay in which she criticized Chief Justice John Roberts’ rationale preserving the legislation in a 2012 challenge — Barrett does not outright say the law is unconstitutional.
“Chief Justice Roberts pushed the Affordable Care Act beyond its plausible meaning to save the statute,” Barrett wrote. “He construed the penalty imposed on those without health insurance as a tax, which permitted him to sustain the statute as a valid exercise of the taxing power.”
At another point, Barrett refers to “Roberts’ devotion to constitutional avoidance.”
— Caroline Kelly, with Joan Biskupic and Devan Cole

Coronavirus and masks
In a heated exchange with Biden, Trump said that Dr. Anthony Fauci changed his mind about the impact of wearing masks.
Fact First: This needs context. Fauci, the Director of the National Institute of Allergy and Infectious Diseases, did change his mind about masks, but the need to wear one is not an ongoing debate, as Trump implied.
Last week, Fauci told CNN’s Chief Medical Correspondent Dr. Sanjay Gupta during a CITIZEN by CNN conference that his evolving advice about masks is a “classic example” of how guidance can change as additional scientific evidence emerges. The pandemic, he said, is an “evolving situation.”
Fauci explained that in the spring, “we were not aware that 40 to 45% of people were asymptomatic, nor were we aware that a substantial proportion of people who get infected get infected from people who are without symptoms. That makes it overwhelmingly important for everyone to wear a mask.”
“So when people say, ‘Well why did you change your stance? And why are you emphasizing masks so much now when back then you didn’t — and in fact you even said you shouldn’t because there was a shortage of masks?’ Well the data now are very, very clear,” he said.
“We need to put that nonsense behind us about ‘well they keep changing their minds,’ “ he said.– Jen Christensen

Defunding the police
After the deaths of George Floyd and Breonna Taylor at the hands of police, there has been a nationwide surge in protests demanding reform. Some have called for defunding the police and diverting those funds into community programs or other emergency intervention options.
Asked about the issue of law and order, Biden implied Trump’s actually the one who wants to defund the police.
“The only one defunding, in his budget calls for a $400 million cut in local law enforcement assistance,” Biden said, referring to the president.
Facts First: This is true. While Trump has been a vocal opponent of the concept of defunding the police, his administration’s 2021 budget proposed funding cuts for local law enforcement programs.– Tara Subramaniam

Trump suggested that New York City crime was going up 100% to 200%.
“If you look at New York, where it’s going up like nobody’s ever seen before,” the President said in Tuesday’s presidential debate.  “The numbers are going up 100, 150, 200%.  Crime.  It’s going up like nobody’s ever seen anything.”
Facts First: This is misleading. While the New York Police Department’s statistics show there have been significant increases in murders, shootings, burglaries and grand larceny of automobiles in New York City to date in 2020 compared with the same period in 2019, the rise is not as steep as Trump cited. Violent crime rates in every other major category tracked by NYPD are down significantly from years past.
There have been 327 murders in New York this year through September 20, according to the NYPD’s CompStat statistics.  Although the murder rate has risen 43.4% in the last two years, they show it’s still down 15.3% compared with 10 years ago.
Overall, the statistics show major felony crimes are still down 1.45% from last year and more than 10% in the last 10 years.
Victims of shootings and other incidents this year have increased more than 103% and more than 93%, respectively, according to the NYPD’s numbers.