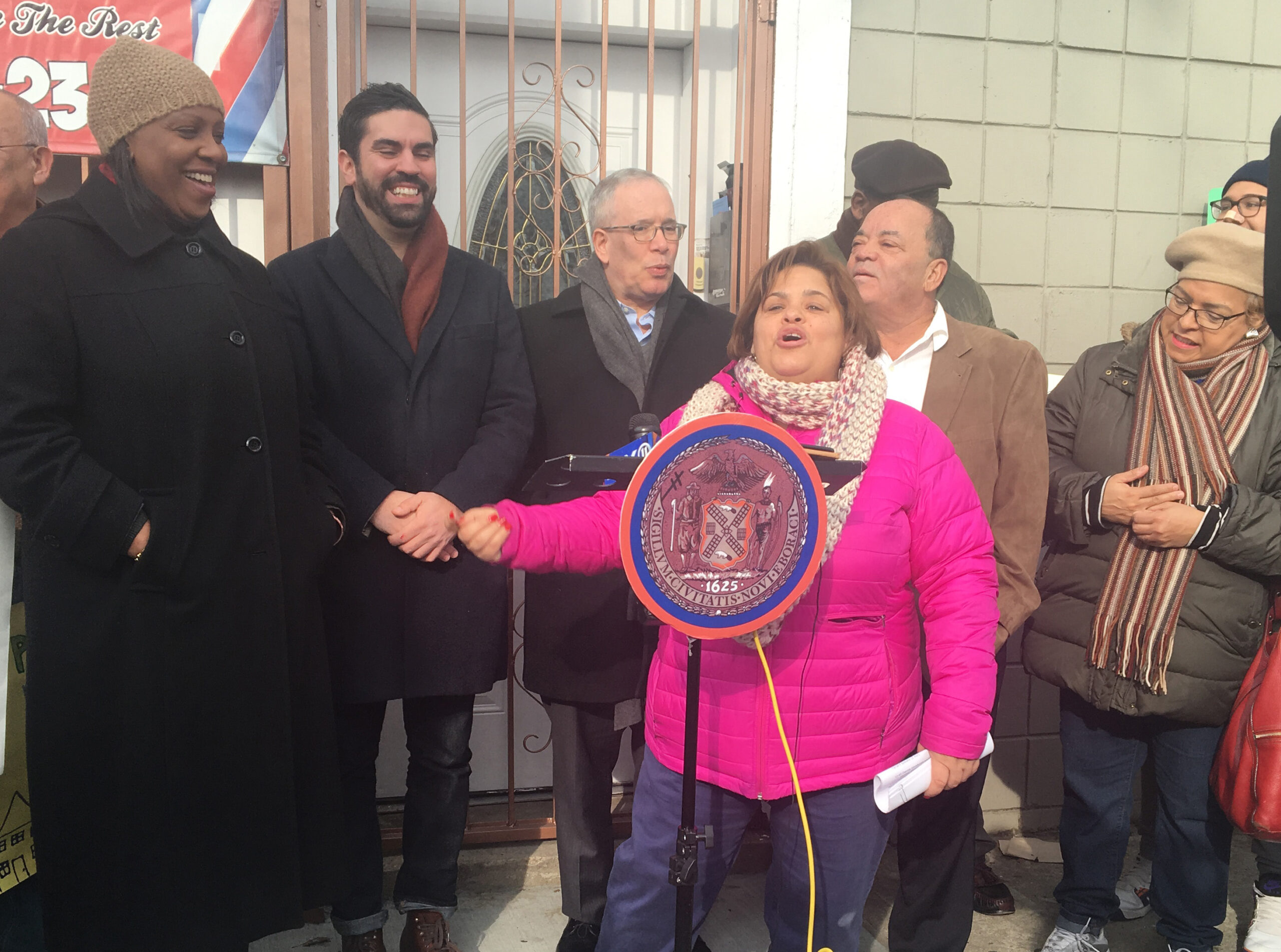 Council member Espinal, Public Advocate Letitia James, state Senator Martin Dilan, Assemblywoman Latrice Walker, The Coalition for Community Advancement, advocates and homeowners rallied against ruthless real estate speculators in East New York/Cypress Hills on Saturday, December 10 at 12:30pm. To demonstrator’s repeated chants of, “Hey, hey, ho, ho Quic Evic has got to go”, the demonstrators marched to the Quic Evic office at 2747 Atlantic Avenue, Brooklyn to serve notice that elected officials will wield their power to protect the rights of tenants and homeowners in the community.

Paul Muhammad of Mosque 7C in East New York came out in support of
the Coalition for Community Advancement . Photo: Bernice Green

Currently, many tenants fall prey to unscrupulous eviction schemes which result in disastrous outcomes if legal council is not available. Moraina Gonzalez introduced her statement to the crowd with, “Quic Evic gotta go”. Then she told the story of how the Section 8 tenants in her building received eviction notices. It wasn’t until she consulted an attorney that she discovered she had the same rights as any rent-stabilized tenant, and the judge dropped the case.

A driver heading south on Atlantic Avenue can spot Quic Evic signs with an accompanying telephone number at the corner of Rochester Avenue. On the Atlantic Avenue median outside the Quic Evic office another sign gets a driver’s attention whether moving north or south. The sign points to the location of the office which is identifiable by a narrow, white wrought-iron gate with signage which only partially covers the name of the previous establishment located there.

The Preservationists: Community leader Zulmilena Then, founder, PENY
(Preserving East New York), is getting support from Councilman Rafael
Espinal in her quest to save ENY landmarks. Photo: Bernice Green

At a nearby McDonald’s, a Jehovah’s Witness named Nancy asserted that the changing tide of real estate has shaken residents who live in the public housing development at 131 Belmont Ave., 180 Powell St., 157 Belmont Ave. and 365 Sackman Street. She claimed four or five individuals representing a private entity knocked on tenants’ doors and offered them cash to move out of their apartments. Some tenants want to accept the offer, others do not. A major conflict has developed between the two groups who will conduct a meeting in the near future to resolve matters.

In addition to targeting tenants, aggressive, unscrupulous investors also target homeowners. Pointing to signs throughout the neighborhood such as “Cash for Houses”, Letitia James maintains that many unscrupulous investors trick homeowners into signing away their house or selling for below market value. These investors conduct one-stop shopping where they provide the buyer, the appraiser and the lawyer. Because the investor has provided the main players in the sale of the house, the homeowner’s interests are not represented.

Once investors buy enough of these houses in adjacent spaces, they will own space to build five- to twelve-story buildings and charge rents that exceed the amount current residents can afford.

To understand real estate in East New York, according to Brother Paul Muhammad of Mosque 7C, “We have to go back to 2015 when the City Council approved Mayor de Blasio’s East New York Rezoning Plan. (Complete details concerning “The Plan” are carefully delineated on the “East New York Community Planning” website. A review of the map shows that the new zoning will allow developers to build five- to twelve-story buildings and maybe more on sites that now contain one-, two- and three-family houses. Inez Barron was the only Council member who voted against it.) Muhammad asserts that when news of “The Plan” revealed opportunities for private developers, an investor frenzy began. Hence, we have the presence of a business such as Quic Evic.

According to Councilman Espinal, these speculators are not only offering to buy, but “They are making repeated calls, leaving flyers, knocking on doors and sending texts to low-income, senior or monolingual Spanish-speaking homeowners”. He maintains that the only explanation for the presence of offices such as Quic Evic are the rising real estate prices which began years ago.

Whether because of real estate prices or “The Plan”, one thing is for certain: harassment of tenants or homeowners will not be tolerated in East New York/Cypress Hills. Senator Dilan issued a clear statement for investors to “Stay Out. Go Somewhere Else”.

Although the demonstrators might disagree about the reason for the prevalence of unscrupulous real estate practices in East New York, they joined forces on this chilly afternoon to state unequivocally, “East New York is Not For Sale”, and they are willing to destroy any signs in the community that suggests otherwise. To illustrate their point, demonstrators removed and cut into three pieces the sign. They hope that just as they removed the sign, their visual and vocal opposition will compel the office to move, too.

Over the phone, an operator representing the Quic Evic office, maintains that they have been in the neighborhood for over twenty years and their goal is to help landlords evict tenants who refuse to pay rent. Some of her clients deal with tenants who owe $5,000 and sometimes $20,000. “We don’t evict tenants,” she said. “We file the paperwork for landlords who come to us. Don’t landlords deserve rights, too?” she asked.

Judging from the demonstrators’ strong words, controlling the shifting sands of real estate in the East New York/Cypress Hills community will take a multipronged approach.

Councilman Raphael Espinal voted for “The Plan” which includes education, employment and digital initiatives. He also convened the demonstration saying he hopes this protest will send a “message to harasser Quic Evic. We will not give up our homes”, and he wants legislators to “give tenants and homeowners protections they need”. A representative from his office said supporting “The Plan” and protesting ruthless landlords are not contradictory.

Standing by Councilman Espinal was Public Advocate Letitia James who belted out, “Bad actors target homeowners who are equity-rich and cash-poor. Cash for houses. Cash for distressed homes. Cash for people facing foreclosure. These offers are lies. The speculators come to you with their lawyer to represent you and they offer homeowners less than what the houses are worth. We need to educate New Yorkers about these scams”.

According to Comptroller Springer, “We must balance development pressure and try[ing] to make sense of what is going on. We are at a crossroads in this community and the city. We have lost 400,000 units of housing that used to run for $1,000 or less, but developers have pushed people out”.

He offered the following suggestions to consider:

State Senator Dilan’s strong message to homeowners was: “Don’t go for the quick profit” Quic Evic may offer. He also announced that he has introduced legislation that would make it a felony for unscrupulous landlords to harass tenants out of their home and the penalty would include jail time.

Evelyn Cruz, speaking on behalf of Congresswoman Nydia Velasquez, said she will fight for tenants utilizing fair housing and civil rights laws. Her office is promoting the

Landlord Accountability Bill to protect tenants who receive Section 8 or any other public subsidies.

With a logo aptly reminiscent of a MonopolyTM board game icon, the office has become a symbol of tenant and homeowner abuse, and a strong contingent of political figures, community organizations and vocal residents have joined forces to bring the offensive image and practices to an end.