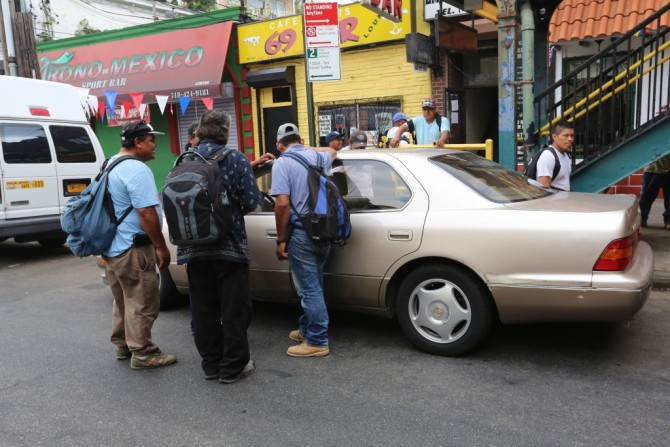 | TRANSLATED BY K. CASIANO FROM SPANISH

It is 9 a.m., and the corner of 69th Street and Roosevelt Avenue in Queens is packed with men carrying backpacks, ready to work. There are more than 150 of them. Most are from Colombia, Mexico, Peru and Ecuador. Two are from the Dominican Republic, and there is even one from India. All of them wear the same type of boots and have the same desire to make a few dollars to live on. A block down the street, alone on a corner, Ramón Rodríguez, from Guatemala, sits on the sidewalk.

The harsh sun shows no mercy against his nape and his weathered skin, but that is nothing when the stomach starts growling from hunger and the pockets are empty. In the last two weeks, the 58-year-old has only been hired to work one day in a house move, for which he got $60. The lady who rents him a room for $500 in Sunnyside cannot put up any longer with his failure to pay.

“Things are very shitty here. There isn’t much work anymore and, if you’re old, they don’t even want to take you,” complains Rodríguez, who has been in the capital of the world for 11 years and who continues to smile in spite of his luck.

“Ten years ago, we were having good times. Then we got lean times and, now, they are beyond lean, they are just scrawny, almost dead,” says the worker, adding that employment options for him and his fellow laborers on the street are gradually dwindling. There is little demand and, for newcomers, “not a lot of fishing gets done anymore in a river with few fish.”

That is something fellow worker Carlos Lema, 51, understands all too well. He left behind his native town of Pereira, Colombia, and his wife and daughter to find a better future. All he has found is the streets, where few people come by to offer work and, when they do, laborers pounce and end up “giving themselves away” for a few dollars just to be taken to work.

“Things here are very hard, and if I don’t leave it’s because things over there are even worse, and so we have to face up to it here,” says the worker, adding that, ironically, it is in New York where he has been the hungriest in his life. “This week, I have only worked one day. It was three hours in a house move, and they gave me $40. We sometimes eat breakfast, but if it wasn’t for the people who come by to give us food, we would have to skip it. They say that it used to be really good here before and that now it’s fallen apart.”

Everyone on this street complains that business has indeed gone down. Although no official study has been performed on what has happened to the job prospects of the over-10,000 workers presumed to exist in the city, the people closest to them confirm that the “lean times” rumor is a reality for many of these immigrants.

“It’s not the way it used to be, that’s true, because now there is more competition. Not necessarily from the job centers in the city – because only three of us exist – but competition from workers who stay as regulars at the companies that need them,” says Manuel Castro, executive director of the New Immigrant Community Empowerment (NICE) which helps nearly 800 day laborers per year.

The community leader explained that one of the many reasons for the reduction in the demand for day laborers is that the construction business is currently seeing growth, and employers no longer need people for just a few days but in a more stable fashion.

“Even the internet has changed things, because now, if a homeowner seeks someone to fix something or to paint, instead of going to the streets, he can find them through an app and make the request online,” he says. “Ten years ago, none of that existed. There are several things going on, and we must adapt to the new times.”

The three job centers that have been built in New York have emerged precisely as part of this adaptation. Aside from guaranteeing that employers pay fair and dignified salaries to immigrants, they promote training and workshops to help workers develop skills in different service areas to make the labor environment easier for them.

“They don’t want anyone here that isn’t able to do specific things anymore. They pick you up and, when they take you to the work area, if you don’t know how to do plaster or flooring or laminating, they give you $5 for the train ride and send you back,” says Dominican laborer Aníbal Medina. “When a day laborer learns to do his job and specializes in something, he can make up to $200 in a day. Otherwise, no.”

The plus side, says Castro, is that the city is supporting them for the first time. In a historic move, the city assigned $500,000 last year to boost and support the three job centers located in Brooklyn, Staten Island and Queens. For fiscal year 2017, a larger amount has been approved with the goal of having at least one of these centers in every borough.

“The Council is proud to have assigned $500,000 in funding from last year’s budget and to raise it to $570,000 from this year’s budget to help day laborers have a space to gather, obtain job support services, legal services to deal matters such as wage theft, and worker training and development,” said a City Council spokesman.

“The day laborer movement needs our support to make sure that each worker, regardless of their immigration status, is treated with dignity and respect through a stern protection of their salaries and safety standards,” said Council member Carlos Menchaca.

Ligia Guallpa, from the Workers Justice Project, an organization assisting more than 500 laborers per year in Brooklyn, says that there seems to be more work in that county due to an increased number of developments. She called on the laborers who stand on the streets to join the job centers, since together they can make employers respect their rights and achieve a better quality of life.

“As workers, whether they have papers or not, they have a right for their work to be valued, and there is no reason for them to risk their lives. [Their work] needs to be dignified, and they need to be treated fairly,” says Guallpa.

And while hundreds of day laborers continue to stand on the streets every day in the hope of seeing job opportunities and money increase, Peruvian worker Carlos González, 45, says that he has no choice but to be patient.

“I know that this drought will pass,” he says, as he runs alongside eight other immigrant laborers after a car arriving on 69th Street looking for two workers. The driver negotiates to see who will do it for the lowest price.

Today was not his day, but he didn’t “give himself away” either.

Stories of Sacrifice and Service