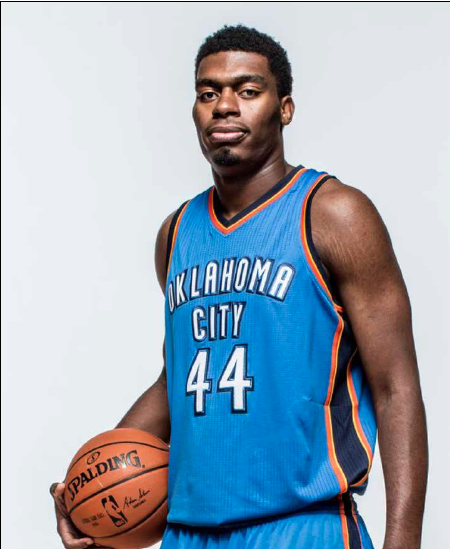 It’s a golden rule. In architecture, when an architect wishes to erect a skyscraper, he must first design a deep and solid foundation in the ground, for if he does not, there is no way that such a tall building would be able to withstand the pressure of its own height. In cliff-diving, those who perform the daring feat understands that ten feet of cliff calls for at least eight feet of water below, adding on another two feet of water for every additional ten feet of height. The depth of the water below dictates from how high you should jump. It’s always depth before height.

Dakari Johnson just recently finished his first full season as an NBA professional basketball player. And while the 6’-11” center for the Oklahoma City Thunder is used to working around other men his size, outside of work Dakari is almost always the tallest guy in the room. His height may be most noticeable, but it is his depth that has allowed him to withstand the pressure of his journey to the NBA.

Dakari’s foundation is cemented in community and in family. Growing up on Lefferts Place, Dakari grew up a product of the intersectionality between community and family. “Growing up in this community, there was always an atmosphere of family, a togetherness. We grew up together, we took care of each other and I always felt like I had people to look up to, people that would take care of me and push me, whether it was my uncles or my cousins. I feel like I learned something valuable every day living here, not just about basketball but about life.” Dakari’s growth and development is a product of his environment – strong family roots, loving community and the legendary basketball courts of Brooklyn. Claver Park, PS 44, 258 Park, these were some of the workshops of Dakari’s youth, where he sharpened his skills and learned the game. “Playing ball in Brooklyn you have to earn your stripes, especially in the parks. I always played against people that were older than me, more mature. And that’s how I got better. You learn not to back down. Brooklyn has a unique brand of basketball.”

In an effort to continue the cycle of mentorship and education, Dakari and his uncle Kojo are producing The Pride Family Science of Basketball Camp, in collaboration with the Brooklyn Waldorf School. The camp will accept children 10-14 years of age and will work to develop student’s basketball skills and broaden their technical knowledge of the game by introducing the mathematical and scientific concepts behind nutrition, skills training and basic plays of the game. Dakari says, “We want to give the children in the community the platform to learn the game, but we also want them to be educated on the scientific concepts associated with the game, and hopefully these kids will begin to see where education is important regarding sports in general, and basketball in particular.”

Whether he is just working out in Claver Park or teaching at his basketball camp, Dakari wants to instill in his community the link between sports and education. Learning the skills and the craft of basketball requires more than just having a good jump shot or being able to jump high. Dakari says that he advanced his skill set because he was willing to learn. “Growing up, I was always a listener, a learner, curious. I’ve always wanted to learn ways to get better and I want to share some of those practices with the kids in my community.”

No matter to what heights Dakari Johnson’s career takes him, he will be successful at it because of his foundation, his family and community. Depth before height. It’s a golden rule.