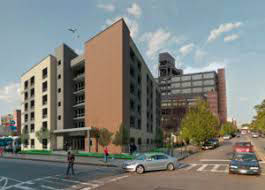 After a two-month summer recess, Brooklyn Community Board No.3 (BK CB3) came to order on September 10, 2018 for the general board meeting. It was held in Restoration Plaza’s The Billie Holiday Theatre.

This reporter arrived at the beginning of the public hearing on Comunilife Inc.’s construction and promotion of Comunilife Woodhull Community Residence. Comunilife is marked as “one of New York City’s best-respected, community-based health and housing service providers.”

Monica Lopez Architects, LLC, a certified NYC Minority/Woman-owned Business, is the principal architect of the building which is sited within Woodhull Hospital’s campus, at 179 Throop Avenue. A contemporary architectural style was selected for it.

A contemporary architectural style was selected for the five-story building which will contain 89 studio apartments. It was announced that 54 of the apartments will be supportive units and 35 will be available to community residents.

Stefanie Zinerman, CM Robert Cornegy’s former chief of staff, explained 18 of the 35 units were designated for BK CB3 residents, specifically. Mr. O’Donnell added that an extensive outreach campaign had been conducted wherein more than 60 organizations that included community-based organizations, elected officials and schools were informed of the project. As of the date of the meeting, the NYC Department of Housing and Preservation had received 300 applications. The deadline for submission is October 16, 2018. A lottery scheduled for late October/early November 2018 will be used to select the final applicants. It is expected that leases will be signed and people will occupy the units by early December 2018. The multicolored brick residence provides 24-hour security. Given the building is not a licensed mental health clinic, there is not a MICA set-aside.

The building offers laundry facilities, a community room and outdoor recreation space. The monthly rent ranges between $746 and $903. The annual income range is between $27,463 and $43,860. It is a smoke-free building.

Two microphones were set up at both sides of the theatre’s interior to permit public comment. One question dealt with a request for mental health training. Dr. Gil and Mr. O’Donnell responded that it had not been scheduled for inclusion but Woodhull Hospital would be willing to do so. Another question was concerned about hiring residents of the area for various jobs. The response was positive. The last question posed concerned the criteria for the 18-unit set-aside for BK CB3 residents. The stated criteria were income and assets.

Upon the conclusion of the public hearing, the meeting moved into announcements from the public. Oma Holloway of Bridge Street Development Corp. stated that on September 20, 2018, there would be a rent-freeze housing event to assist with completing Senior Citizen Rent Increase Exemption (SCRIE) and Disabled Rent Increase Exemption (DRIE) applications at the Quincy Street Senior Residence, located at 456 Nostrand Avenue, 4:00 PM – 6:30 PM. This application assistance occurs every second Monday of each month. On September 28, 2018, Hancock Park would host an outdoor event.

Board Chair Richard Flateau requested a board member roll call which resulted in a count of 44 board members present and six absent. These numbers indicate a quorum. The next order of business was committee chair reports. Given it was the 10th day of the resumption of the 2018-19 season, the preponderant statement was the day, time and location for each committee meeting. A one Ms. Antoine was introduced to the body as a new board member.

Flateau announced to the audience that the members would go into an executive session to discuss a personnel matter, and directed the public and community board employees to leave the theatre.

The View from Brooklyn: How 9/11 Changed Us