Business Insider: Five Common Mistakes That Could Get Your Mail-in Ballot Challenged, Disqualified or Not Counted At All
Advertisement 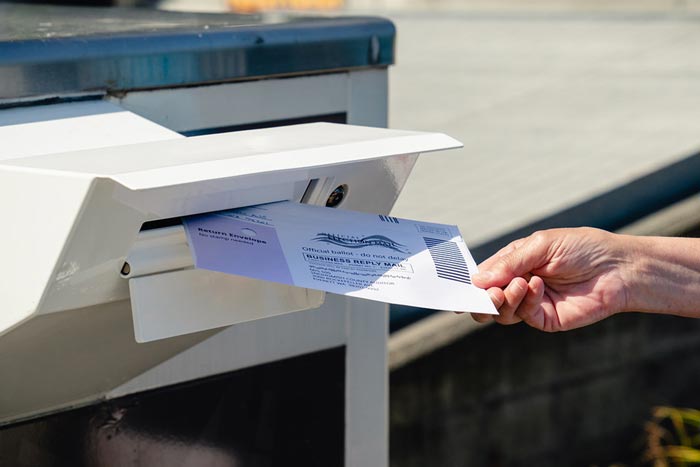 1) Improperly filling out your ballot
When you get your mail ballot, be sure to fill it out on a flat dry surface (no nearby coffee mugs or wine glasses) and carefully follow the instructions that come with it.
Similar to the multiple-choice standardized  tests you took in high school, ballot scanners can accept only certain colors of ink and ballots that are filled out properly. Ballots can’t have stray marks or multiple choices filled in for the same office.
“You don’t want to use red ink, marker, or anything that could be problematic. If your instructions say to use black or blue ink, use black or blue ink. If it says fill in the oval, fill in the oval. I think it’s really critical for voters to follow the instructions more than anything,” Amber McReynolds, the CEO of the National Vote at Home Institute and a former director of the Denver Elections Division in Colorado, told Insider.
Adrian Fontes, the top election official in Maricopa County, Arizona, told Insider that county canvassing boards often must resolve major errors with mail ballots.
“If you’re voting in person, and your ballot doesn’t go through the tabulator, almost all models of tabulators will kick it back out and say there’s something wrong, either a double vote, overvote, or something like that,” he said. “In a vote-by-mail system, you don’t get that second-chance opportunity, so those ballots have to be adjudicated.”

2) Forgetting to sign your envelope
Every state requires a voter to sign an affidavit on the outside of the envelope containing their mail ballot affirming their identity and eligibility to vote, so make sure you sign in every place that requires a signature.
Monica Lewinsky recounted in a recent Twitter thread how she went to extreme lengths to vote from abroad in the 2016 presidential election, including covering the expensive costs of getting her absentee ballot sent to her in Australia via FedEx and back halfway across the world to New York, only to return home and discover her ballot was rejected because she forgot to sign the outer envelope.
“The most common reason for rejection is people forget to sign,” Rick Barron, the elections director in Fulton County, Georgia, told Insider. “If they don’t sign the application, or they don’t sign the ballot that’s sent, that’s really the only reason why we end up rejecting them.”

3) Using a different signature from what your state has on file
Thirty-one states now use signature verification to confirm the authenticity of voted ballots, according to the National Conference of State Legislatures. In this process, election officials cross-check the signature a voter used to sign their ballot envelope to see if it matches the voter’s most recent signature on file with the elections office, the Department of Motor Vehicles, or another government agency.
Signature matching adds an extra layer of security to ensure the integrity of mail ballots, but it can also lead to a greater share of ballots being challenged or rejected.
Kathleen Unger, a voter-protection attorney and the founder and board chairwoman of the nonprofit VoteRiders, told Insider that signature-matching problems could particularly affect younger and first-time voters.
“I used to think that this issue applied especially to older voters and to some folks with disabilities,” she said. “But I then had this aha discovery after the 2018 election and saw that in the Parkland area of Florida, there were an excessive number of ballots rejected among young people because of signature issues.”
In Georgia, too, young voters, first-time voters, and Black voters were far more likely than others to have their ballots rejected for mismatched signatures or for being incorrectly completed in 2018, one study found.
“Young people use one signature when they register to vote, and then they go off to college, become very creative, and their signature changes,” Unger said. “I’m not ready to fall on my sword over this, but I think it’s possible that signature matching could be the hanging chad of 2020.»
McReynolds said that if you’re not sure which signature your elections office uses or think your signature may be outdated, you can update your signature on file with your local elections office by submitting a new paper voter-registration form or on your paper mail-ballot application.
“Consistency is really what the election officials are looking for,” McReynolds said. “We used to have people taking their ballot more seriously than everything else, so they’d write out a really nice, beautiful signature, and yet their voter-registration form did not include that. So consistency really matters.”
At least 21 of the states that use signature verification have an established “cure” process to give voters a chance to correct any discrepancies with their signatures in order for their ballot to be counted, including Kentucky and New Jersey.
Those states need to have some form of contact information on hand to let the voter know of the problem and give them the greatest chance of having their vote counted.
“In Arizona, we ask for a phone number on the outside of the envelope that is not part of the public record but is part of the affidavit voters sign. So if we have an issue with a signature, we can call the voters back as quickly as possible,” Fontes of Maricopa County told Insider.

4) Not including required additional documentation
While most states will allow anyone to vote by mail in November, not all states’ rules are created equal. Some states require voters to take additional steps, like having a signature from a witness, to authenticate their ballot.
Thirteen states require all or some voters to submit a copy of their photo ID with their absentee ballots, and most people in Oklahoma and Missouri who vote by mail must get their ballot envelopes notarized.
Alaska, Louisiana, Mississippi, North Carolina, South Carolina, and Wisconsin will require voters to include one witness signature on their ballot envelopes in November. And Alabama requires each voter to submit a photocopy of their photo ID and obtain two witness signatures or notarization.
“In Wisconsin, all voters are required to have a witness signature, but we see a lot of voters who think that the witness signature is only required if they needed assistance, so there’s a bit of confusion over that, which we are working to do some education around,” Claire Woodall-Vogg, the executive director of the Milwaukee Election Commission, told Insider.
If you need help navigating the voter-ID laws in your state, affording the cost of obtaining an ID, or making a photocopy to send in with your ballot or application, organizations like VoteRiders can help.
“Based on a Brennan Center study showing that 11% of voting-age Americans do not have a current government-issued photo ID, that translates into about 25 million eligible voters,” Unger said. “There are many millions more who are so confused and intimidated by these complicated and onerous voter-ID laws that they won’t vote, even though they have a valid ID.”

5) Sending your ballot back too late
One of the most common reasons mail ballots are rejected is that they arrive too late or lack a postmark.
Out of the 40 states not sending voters a ballot in the mail in November, 31 allow voters to request their ballots by mail within seven days of the election. For years, experts have said these tight deadlines set voters up to fail by not allowing enough time for a ballot to be delivered each way per the US Postal Service›s delivery standards.
Now those fears are compounded by new organizational changes at the Postal Service that are delaying timely mail delivery in some parts of the country.