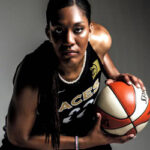 Until There is Justice: The Life of Anna Arnold Hedgeman by Jennifer Scanlon is the first biography (published 2016) of the African-American civil rights leader who helped organize the 1963 march on Washington, where Dr. Martin Luther King delivered his “I Have a Dream” speech.

A demanding feminist, devout Christian, and savvy grassroots civil rights organizer, Anna Arnold Hedgeman played a key role in more than half a century of social justice initiatives.
But until now, says Scanlon, she has received only a fraction of the attention she deserves.  A Q&A with Scanlon follows:

How would you characterize Hedgeman’s relationship with the civil rights movement?
Hedgeman was too often ignored by her contemporaries, even when they depended on her efforts, and since then she’s most often been ignored by historians chronicling the movement.
Hedgeman’s story fleshes out some of the complications of the civil rights movement as far as gender is concerned, but it also illustrates that Hedgeman and other black women of her time played formative roles as intellectuals in the development of civil rights, black theology, and feminism.

Just as one example, the simple but lasting narrative of feminism is that since its origins it has been a white, middle-class women’s movement. Yet Anna Arnold Hedgeman, as a founding member of the National Organization for Women (NOW), insured that questions of opportunity for poor women, questions of racial discrimination, and understandings of the ways in which race, class, and gender were interwoven, were part of the founding documents of the organization. From my perspective, she complicates any simple narrative about 20th century social movements.
Does it strike you as ironic that the civil rights movement, which was formed to combat one type of prejudice, was itself guilty of another type, gender discrimination?

African American women found a variety of ways to respond to the sexism of their day. As the only woman on the organizing committee for the 1963 March on Washington, Hedgeman pushed her colleagues to provide women a speaking voice during the march, but the men were unrelenting. She and other women voiced their protest in a number of ways, and finally a compromise was arrived at, allowing for a brief tribute to African American women during the proceedings. Hedgeman didn’t hesitate, then or after, to point out contradictions she witnessed, whether they resided with whites, with African American men, with Christians, with her nation. She was an advocate of a more just study of American history, including the study of women’s lives. Hedgeman noted, for example, that the anniversary of the March on Washington might well have been celebrated as Rosa Parks Day. The ironies, as you put it, frustrated her, but I wouldn’t say they surprised her.

What is Hedgeman’s legacy today?
At this moment, we would benefit tremendously by Hedgeman’s reasoned and demanding presence, but since she’s not with us we ought to take heed of her call for dignity and opportunity for all marginalized people.
Was Hedgeman saying it shouldn’t matter what color we are?
Hedgeman felt color should not matter but understood how deeply it did. As she put it, “I’m wasting half my life talking about race when I could be doing so many other things. This doesn’t allow me to be the full person that I am or to make the full contributions that I might.”

Still, she continued to wage a fight for civil rights because she saw no way around it.
It was truly a labor of love. I gained access to 200 boxes of unprocessed papers, at the National Afro-American Museum and Cultural Center in Ohio. With support from Bowdoin, and from the American Philosophical Society, I made many trips to Ohio to uncover the pieces of this complex and fascinating story.

What did you learn about Hedgeman that struck you the most?
During the Great Depression, facing a host of financial struggles, Hedgeman and her husband, noted tenor Merritt Hedgeman, pinned a “Declaration of Independence” to the curtain of their apartment in Harlem, signifying their determination to do the work they found most important, regardless of the risks involved. As I read through the countless papers in her archives, that act continued, to me, to seem emblematic of her life and work.

Remembering Marcus Garvey on his Birthday – Letter to President Biden