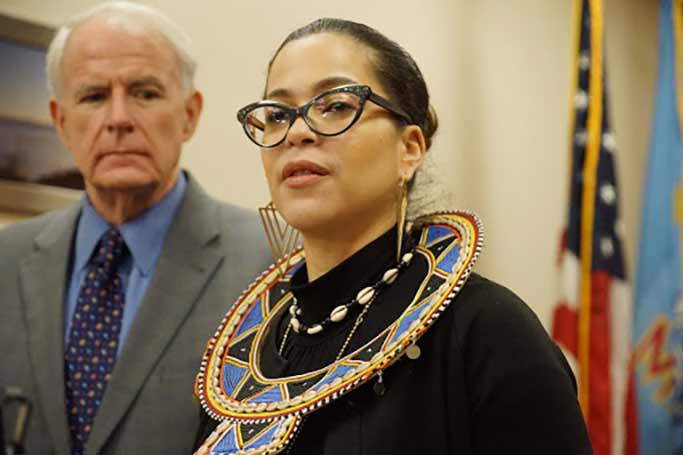 Wisconsin’s Gov. Tony Evers set many heads nodding across the nation when he spoke of the plight of people in Milwaukee.
“The severity of this disease in the African American community is a crisis within a crisis,” said Gov. Evers.
He voiced what many have been thinking, seeing, and living: that the eye of the storm of the coronavirus (COVID-19) is wherever Black people are found in tight concentration and financial hardship. The virus – called “Big Rona” in creative and colorful Black vernacular – has been devastating to countless populations worldwide. In the U.S. it’s the poor and working poor, the incarcerated, the educationally disenfranchised and immigrant communities that are suffering the greatest losses. And Black people in these United States comprise the majority in four out of these five categories.

Here in Brooklyn we are familiar with the ways in which these dynamics play out. And we know that just as we were strongly encouraged at every turn to fill out the 2020 Census, being counted as people affected by the coronavirus is also critically important. It matters now and matters heading into the future that is life beyond COVID-19.
In Milwaukee, where Black people are 38% of the population, they represent half the confirmed cases of COVID-19 and half of the deaths. Residents say that in some areas of the city, grocery stores, healthcare options and even public transportation are not easily accessible.
Also concerned about this is Commissioner of Health for the City of Milwaukee, Jeanette Kowalik.
“African Americans in Milwaukee face other socioeconomic challenges that can impact a person’s health,” said Kowalik. “We must remember now and in the future that public health goes beyond just diagnosis and treatment and should be considered more holistically.”
Maryland State Delegate Nick Mosby, in a series of social media posts, insisted that the federal government release data on the number of coronavirus cases broken down by race. “… I have asked multiple sources about the demographic breakdown by race of known COVID-19 cases and deaths.” Mosby posted on Twitter. “I have seen county, age, and sex, but not race.”
Mosby is concerned about cities such as Baltimore, which is 60% Black and is where community residents are painfully acquainted with the city’s infamous medical experimentation and profiteering using the body of Henrietta Lacks. He also expressed that implicit bias in the healthcare delivery system may compound the difficulties that communities of color face in accessing testing and treatment.
“Because of the stress that this pandemic will place on hospital capacity,” he told The Baltimore Sun, “this will have an adverse impact on populations who are less likely to have insurance and primary-care physicians.”
In Detroit, medical anthropologist Jonathan Stillo of Wayne State University concurs that racial demographic info might help lessen this impact.
“Right now, we’re only seeing little snapshots, and those are totally dependent on how much testing is happening,” he told Michigan Radio, the local NPR station. “It makes the job of researchers, and folks who are trying to figure out what’s going on and make policy to address it, really hard. We’re flying blind, I think, in a lot of ways.”
What is known does not inspire confidence that Detroit can efficiently meet the needs of the Black community without access to the data being requested.
“African American folks in Detroit have higher rates of asthma, they have higher rates of diabetes, they have higher rates of some of these conditions that we think may make outcomes worse,” Stillo said. “You’re sort of layering biological problems on top of already-existing social problems. Issues of lack of health care, lack of insurance, unstable housing, and things like that.”

Containment Measures In Effect Local To Global As Coronavirus Rages