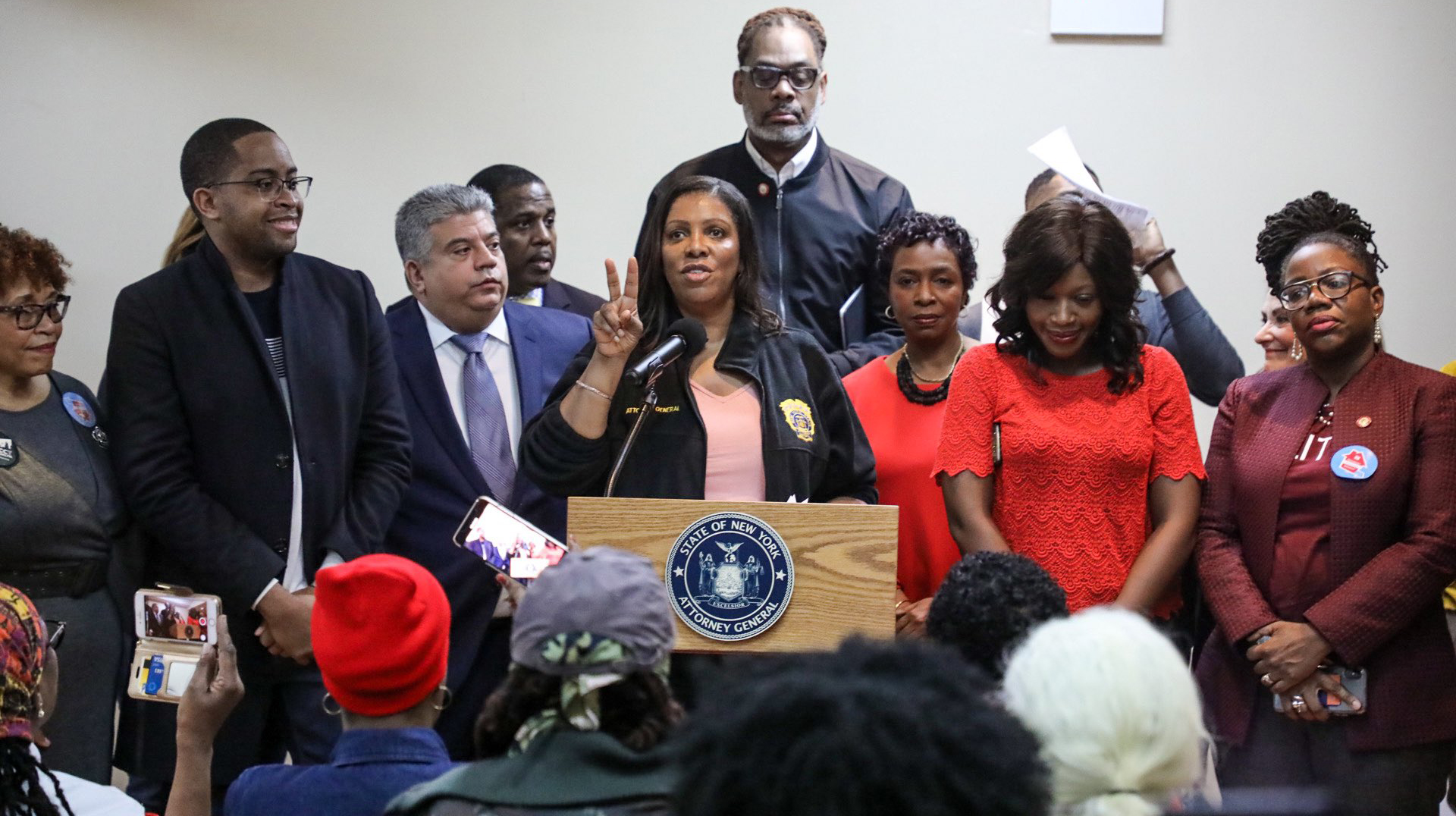 BROOKLYN – New York Attorney General Letitia James today launched the “Protect Our Homes” initiative with a day of action to inform homeowners in Brooklyn about deed theft and other housing-related scams. Today’s efforts are the first step in a campaign of coordinated prevention and enforcement actions to combat deed theft in New York City. In addition, Attorney General James announced the formation of an interagency task force to focus on deed theft and other housing fraud issues.

“Homeownership is the cornerstone of every community, but for decades, longtime homeowners in rapidly gentrifying areas have been the prime targets of schemes to steal their homes,” said Attorney General Letitia James. “Deed theft is a heartless crime foisted on people who worked all their lives to achieve a vital piece of the American Dream, only to have that dream become a nightmare. My office is committed to working with our law enforcement and community partners to use a combination of education and enforcement action to help our neighbors protect their homes.”

Deed theft has become a common tool of career criminals and unscrupulous real estate developers to illegally obtain real estate so they can sell it at a huge profit in high-demand housing markets like Brooklyn. This illegal scheme especially affects people of color, the elderly and other vulnerable homeowners who are being scammed into signing over the deeds to their homes to con artists. Deed theft usually happens when scammers forge deeds to look like they purchased the home, or when homeowners are tricked into signing their homes over to a scammer without knowing what they are doing. Scammers then seek to evict the homeowner and sell the house to a third party at a significant profit.

As a kickoff to today’s initiative, Attorney General James partnered with the Homeowners Protection Program (HOPP), AARP NY, elected officials and others to send over one hundred volunteers in the neighborhoods of Bedford-Stuyvesant, Prospect Lefferts Gardens and Flatbush. Volunteers knocked on doors and left informational materials about what deed theft entails, how to spot it and what to do if you think you’ve been a victim.

Attorney General James announced today that her office has created a dedicated complaint process for issues pertaining to deed theft. Those who believe they have experienced deed theft are encouraged to call the help line at 1-800-771-7755, e-mail deedtheft@ag.ny.gov or fill out the online complaint form. Constituent services staff are trained to intake complaints, do initial research and make referrals as needed.

The Office of the Attorney General is also developing a program to educate faith leaders, senior center workers, home health aides and others who regularly engage with potential victims of deed theft so that they can spot the warning signs of deed theft, report these scams and connect the homeowner to trusted service providers.

“IMPACCT Brooklyn is a proud and active member of the Homeowner Protection Program known as HOPP, sponsored by the Office of the AG,” said IMPACCT Brooklyn Executive Director Bernell Grier. “For too many years, homeowners, particularly homeowners in Central Brooklyn, have been targeted by unscrupulous players. They appear as solution providers during a time when a homeowner is most in need of help. This campaign, initiated by AG James, is a heroic and most-needed effort to inform homeowners and provide tools to combat these scam artists and protect perhaps the greatest asset our families possess, our homes. Today starts the campaign to preserve our homes.”

New York City received around 3,000 complaints about deed theft between 2014-2019, 45 percent of which came from Brooklyn. The Office of the Attorney General receives 3-4 reports of deed theft a week, predominantly from Brooklyn, Queens, Northern Manhattan and The Bronx. Since 2014, the office has been investigating these issues stemming from complaints from HOPP partners about the rising numbers of deed theft and mortgage rescue scams. On January 8th, 2019, Attorney General James announced the sentencing of Marilyn Sanchez who filed two fraudulent deeds and has active ongoing investigations into other complaints.

“Deed theft is an unconscionable evil striking the heart of Brooklyn depriving hardworking people of the single most important asset any American can hope to have: a home,” said Representative Yvette D. Clarke (NY-09). “I will continue to work tirelessly to ensure that all bad actors get the punishment they deserve and victims get the help they need to reclaim their homes, and am proud to be a part of this effort to help support our fellow Brooklynites to ensure that no one falls victim to deed theft again protecting the dream for us all.”

“The foreclosure crisis may seem to be over for Main Street, but its lingering effects are still felt in lower- and moderate-income areas and communities of color. Deed theft, deed fraud and mortgage scams nibble at the edges of an already-fraught housing situation for our community, making it more difficult for homeowners to hold on to their property,” said Council member Robert E. Cornegy, Jr., Chair of the Housing and Buildings Committee. “After years of work with colleagues, we have been able to enhance protections for homeowners through legislation and program funding, but it is clear there is still more work to be done. I will keep fighting to protect legacy residents and will not allow my neighbors to be taken advantage of by unscrupulous actors.”

CUNY Honors Dr. King in a Recommitment to Service and Its Historic Mission