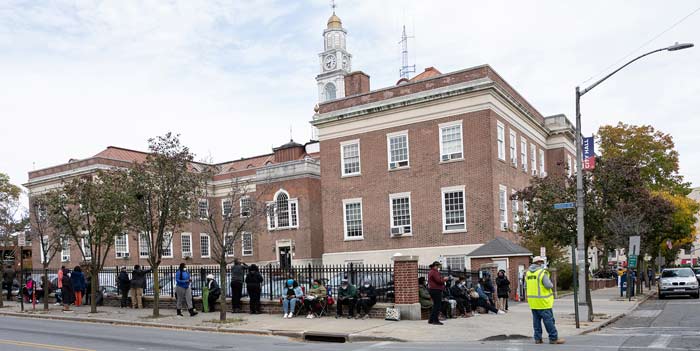 My Our Time Press assignment was to photograph lines at a polling site in Westchester. I arrived at City Hall in Mt. Vernon on Sunday (25) at 11:00am, and it was a phenomenal sight to behold. I got an up close look at what was going on around the country: Americans standing on line for hours to cast their votes – something I watched on television.

But the up-close experience being an observer spoke volumes about how people feel about what’s going on in this country. And taking it a step further, it spoke to me about the struggles of my parents, grand-parents and great grandparents and all the ancestors before them. They built this country; fought for this country, and defended it even though they still had to struggle for human rights, and the right to vote. I thought how some ancestors prayed that whoever came after them would have rights they did not have.

About four and a half hours later, at around 4:30, I packed up my camera, and joined the line to cast my vote. I recalled what Harriet Tubman and all the others had to do in their quests for freedom. Their journeys were longer, harder and deadly. Their travels were in days, weeks, years and through the decades. Four or five hours was nothing in the scheme of things! I cast my vote at around 9:00pm.

Putting this all through another lens, if a few hours is the price to pay for getting the current administration out of the White House. Then it was worth the wait for that reason as well.

Barry L. Mason, an award winning fine artist and photographer, has shot the majority of photographs appearing in Our Time Press, since its inception nearly 25 years ago. The photographs on this page and on the cover are just a selection from the 400 images he shot on Sunday.
.

THEY RODE THE POLLS

For Some, The Vote is a Vow to the Ancestors